May 12, 2017 | Posted in Getting Into Precision, Dealer Development, Data Management

It’s been a challenging few years for many precision farming dealers navigating the instability of the commodities market and cautious purchasing habits of customers.

But the results of this year’s fifth annual Precision Farming Dealer benchmark study — with contributions from 120 farm equipment dealers, input retailers and independent precision companies — signal an optimistic shift in retailers’ revenue expectations and business objectives compared to recent years. Talking with dealers during the first part 2017, there seems to be more confidence and less concern about the current ag market.

Says one precision farming manager at a Midwest equipment dealership, “The last few years have forced us to be more creative, but they have also been our 3 most profitable years. Dealers who have been able to adapt and learn in a down market are going to be the better for it and we’re already seeing that positively reflected in our bottom line.”

While challenges remain — training voids, market saturation and crop prices — this year’s report reveals a revival of agronomic and data management-driven services, along with an emphasis on recurring revenue sources.

Below is a sneak peek at some of the highlights from this year’s analysis. Look for full coverage in this Summer’s print edition of Precision Farming Dealer and online at www.PrecisonFarmingDealer.com.

During the last few years, dealers have been extremely conservative with their revenue growth projections, reflecting their customers’ more prudent purchasing habits.

But this year’s benchmark study reveals a reversal in recent revenue trends. Based on responses gathered during the first quarter of 2017 from 28 different states and Canada, 23% of dealers reported 2016 precision revenue growth of 8% or more, more than doubling the forecast (10%) from last year’s report.

Fewer dealers are also anticipating measurable revenue declines in 2017. Only 11.5% are forecasting a dip of 2% or more, by far the lowest total in the history of the study. Only 4.8% of dealers are projecting revenue decreases of 8% or more.

Some 28.9% of dealers forecast little or no change in their precision revenue year-over-year. It’s worth noting that despite the overall optimism, there is still concern about how the ag economy could influence farmers’ willingness to invest in technology.

Says one dealer from Ohio, “Low income levels have slowed the demand for services. We need to convince customers the economic data that will be generated by technology can help them make better input decisions.”

Adds another dealer from Idaho, “Farmers are willing to keep older technology in their tractors and equipment. Trading up or upgrading is not going to be a number one priority for them this year. We are gearing up to provide exceptional service to these customers by doing more customer training and field days so we can keep their business in the years to come.”

While dealers are seeing revenue rebound, it’s not necessarily being driven by hardware sales. Some 48.6% of revenue — the lowest percentage in the 5-year history of the study — is coming from component sales.

Despite a small rebound last year, the percentage of revenue generated by hardware sales has dropped every year from its 62% peak in 2013. Dealers often point to market saturation and competition as contributing factors to decreasing margins on precision products.

“One of our biggest challenges is dealing with low margin competitors,” says one precision farming manager in Wisconsin. “We must hold our margins. We will not take low margin deals, so we may be out of a deal just on price.”

An alternative approach to rooting revenue in hardware is emphasizing the service side of precision. While this can be an equally competitive market, it is one which dealers have had success separating themselves from the competition.

Some 17.1% of 2017 revenue comes from ag technology service and support, nearly identical to last year’s 17.3%, but below the 22.2% total in 2015. Still, developing more recurring streams of revenue has been a focal point for dealers and another area of opportunity that bounced back in 2017 was data management services.

After dropping 3 points in 2016 to 5.3%, data management rebounded to its 2015 level of revenue in this year’s study at 8.3%. Although still a small percentage of overall revenue, there is momentum toward transitioning into more agronomic services.

“Data is the easiest way to prove ROI,” says one Wisconsin precision manager. “But you have to know your market.” 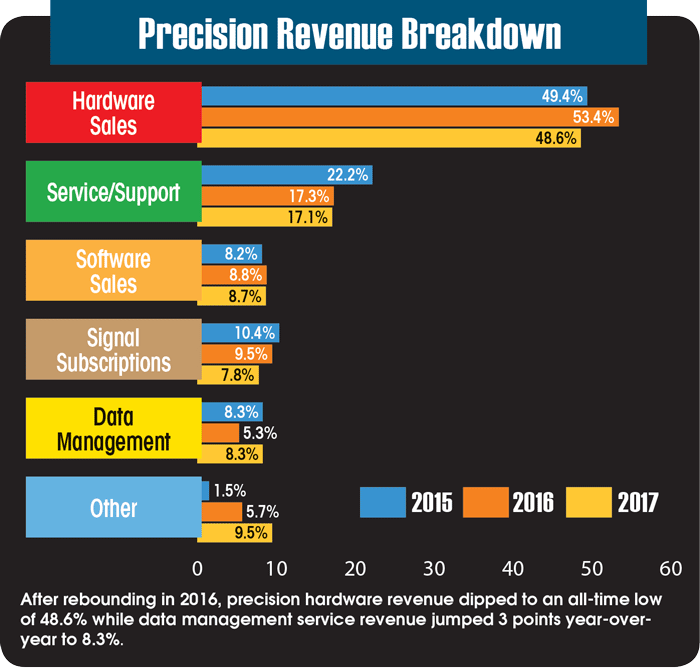 We recently shared some perspective in this segment on what the dealership of 2030 could look like, with a major emphasis on precision technologies like robotics and hyper-specialized services. But what are dealers forecasting as their best bets for growing precision revenue in the next 3 years?
View More
Top Directory Listings