Technical Competency a Must to Support Precision Sales 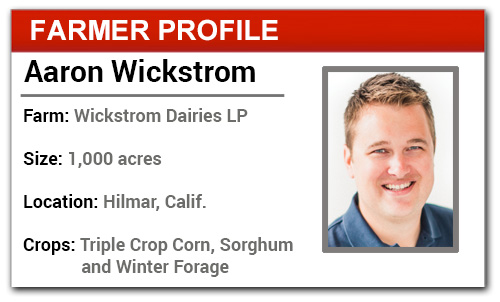 For Aaron Wickstrom, keeping his 2,400 dairy herd fed requires triple-cropping on his 1,000 acres of flood and pivot irrigated fields near Hilmar, Calif.

To provide silage, he first plants corn by May 1 that’s harvested in August, followed by sorghum that’s harvested as silage in October. He then no-tills a winter cover crop of Italian rye or a mix of wheat, oats and rye.

Almost 3 years ago, he switched to spring strip-tilling corn ground with his 3 point hitch-mounted, 12 row Orthman 1tRIPr strip-tiller/hipper. He then follows with a 12 row John Deere 1725 planter and uses an RTK signal to direct his auto-steer system.

2016 marked the first year he tried variable-rate seeding based on soil type. “So far, it looks good, but we need to see the yield data,” Wickstrom says.

Gathering yield data from the silage chopper needs refinement, he says, because the data used to calculate yield is based off of Midwest field data. “I don’t think it accurately represents the silage yields and moisture content of California fields,” Wickstrom says. “We have 12 foot corn, not 8 foot corn. We need more sampling for better yield calibration.”

He was also frustrated by custom operators he has hired in the past who have precision farming equipment, but choose not to use it. That’s when he decided to install and use precision equipment in his operation.

Unfortunately, the first system he chose totally missed his expectations. “We simply didn’t have the dealer support we needed to get it working,” Wickstrom says. “They couldn’t get our RTK signal to work correctly. The system would lose the line and the dealer couldn’t figure it out.”

That’s when he replaced the system with Ag Leader Integra monitor, auto-steering and liquid controls. “It took the dealer about 3 hours to install the new system,” Wickstrom explains. “It’s worked well for us.”

Point of Pain: Know the System You Sell

He recommends that precision specialists take the time to hop in the cab, run through functions and provide refresher courses, so farmers are sure they understand what’s supposed to happen.

“For us, the technician was far away and the phone support was not helpful,” Wickstrom says. “Phone support is essential because it saves everyone time if they can talk me through it within 5 minutes vs. having to wait for at least 45 minutes for the technician to get here. If you sell the product, make sure you know how to use it and support it.”