The Trump administration recently announced that the US intended to withdraw from the 2015 Paris Climate Agreement. The Paris Agreement was a global accord in which participating countries agreed to work to limit global warming this century to 2 degrees above pre-industrial levels. The Paris Agreement has been signed by 195 countries, including the US. The US is the first major country to announce its intent to withdraw.

The effect of withdrawal from the Paris Agreement will, however, have little or no impact on America’s farmers. This post explains why.

Nearly every multinational (and many domestic) food supplier is already committed to reducing their carbon footprint. These climate-friendly corporate policies are being driven by consumers, not the United Nations or a goal set by the Paris Agreement. Polling of consumers has show a dramatic shift in climate change consciousness in the last five years. Here’s a poll from the Yale Program on Climate Change, showing 76% of Americans are between “cautious” and “alarmed” about global warming. 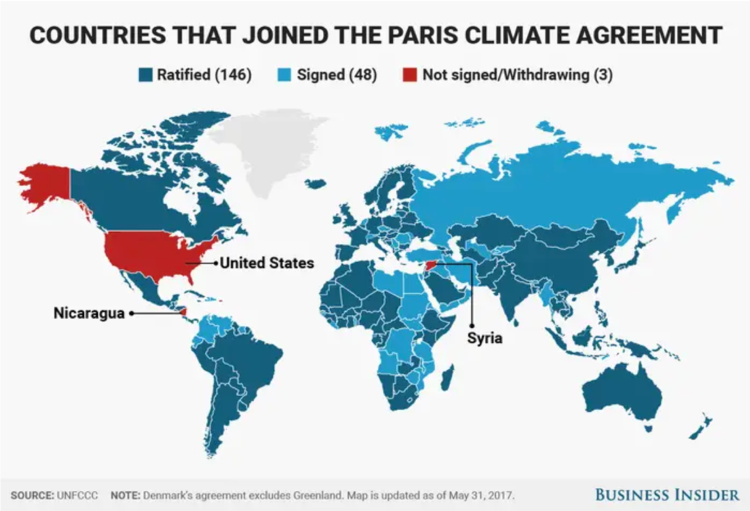 These shifts are driving food processors to change their ways. For example, General Mills is committed to reducing its greenhouse gas emissions (GHG) by 28% by 2025. This goal is for the General Mills “entire value chain,” because only a fraction of its GHG come from its own operations. Danone, parent to Dannon dairy products we see on the shelves, has stated that its supply chain will be completely carbon neutral by 2050. And McDonald’s Corporation has also set targets for reducing GHGs, this means reducing packaging waste, improving supply chain efficiencies, and sourcing sustainably raised beef and other raw products. McDonald’s estimates its efforts will reduce the emission equivalent of 32 million passenger cars by 2030.

These commitments are already having massive impacts on farms. Food processors are pushing climate-friendly changes down the supply chain to production. We’ve already witnessed climate-change provisions in milk supply contracts that dairy farmers are being asked to sign. Other food suppliers, like Costco and Walmart, are addressing the issue by taking more control over their supply chains. This makes it relatively easy to require operational changes with their contract farmers.

There are also programs emerging to create carbon markets that pay farmers to adopt or maintain climate-friendly farming techniques, such as no-till. These programs use ag data to verify that certain practices were followed. The US intent to withdraw from the Paris Agreement has had no chilling effect on the rise of these programs. (And for farmers, that’s a good thing).

While some may think that withdrawal from the Paris Agreement frees American industry from responding to global climate change concerns, in reality, that ship sailed long ago.

Filling Potholes on the Road to Rural Broadband