This post is part of the Science Tuesday feature series on the USDA blog. Check back each week as we showcase stories and news from USDA’s rich science and research portfolio.

With droughts becoming more severe, water tables getting lower and an increasing demand for water from growing suburbs and cities, farmers know they need to use water more sparingly. That’s why recently patented technology developed by USDA’s Agricultural Research Service (ARS) scientists in Texas is so important.

Steve Evett, Susan O’Shaughnessy, and their colleagues at the ARS Conservation and Production Research Laboratory in Bushland, Texas have spent years trying to help growers maximize water in a region that depends on the Ogallala Aquifer, a massive underground reservoir under constant threat of overuse.

They recently developed two complementary technologies that offer practical ways to ensure that crops get only as much water as they need.

One uses a network of sensors mounted on the pipelines of above-ground commercial irrigation systems. As the irrigation system moves across a field, the sensors determine a crop’s water needs triggering the release of water based on a signal produced when the crop is water stressed.

Using an algorithm tied to the water needs of specific crops in specific regions, the system determines when, where and how much to irrigate. The system is based on years of field observations by USDA scientists. A patent on the technology was issued to USDA in December. 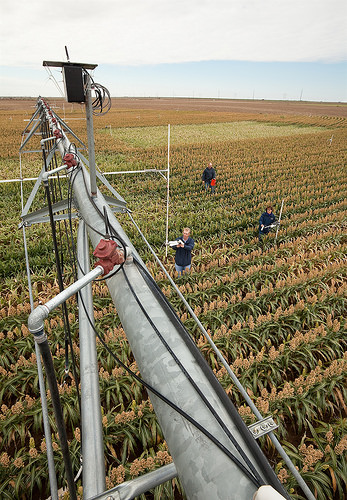 USDA researchers also have developed a sensor that can be placed in the ground to determine soil water levels. It measures the time required for an electromagnetic pulse to travel along an electrode embedded in the soil.

Water slows the signal so the recorded speed represents the amount of water in the soil. When connected to a computer, the signals activate water pumps and/or valves at predetermined soil water content levels. Sensors are incorporated into hollow, nonconductive, plastic tubes that can be divided into segments and placed at any desired depth.

The signaling technology was patented in February.

Working with ARS researchers, Acclima, Inc., an irrigation technology company based in Meridian, Idaho, has developed a palm-sized version of the soil sensor that can be placed in a trench and covered with soil, or pushed into the soil, and left to monitor soil water levels for months at a time.

The company also has developed a larger system that uses sensors incorporated into the plastic tubes for monitoring at deeper levels.

You can see a video of it being installed below.

Both the palm-sized sensor and the larger system will be available to growers later this year.

FAA Struggling To Deal With Drones, Cracks Down On Farmers And Realtors (Forbes.com)