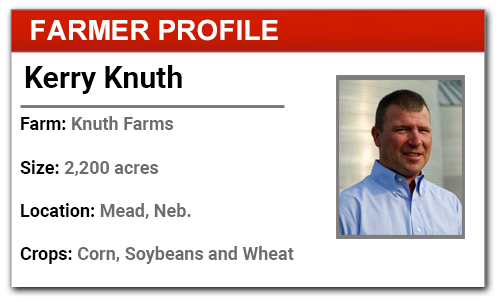 Knuth farms 2,200 acres of irrigated and dry land ground near Mead, Neb., growing corn, soybeans and wheat. The corn is strip-tilled and the soybeans and wheat are no-tilled. Knuth’s first exposure to precision farming equipment was using a Trimble GPS 170 light bar in his custom sprayer. “It has within 3 foot accuracy. It was very expensive at the time, but helped spraying accuracy,” he recalls.

A yield monitor in his John Deere combine relied on a WAAS signal to record yield data and he used auto-steer on all of his tractors, but the 3 foot variance and changing location of the A-B line over time challenged his need for greater accuracy.

“When we’d set the A-B line in the field each spring, we would mark it with a stake and then recalibrate the A-B line to that stake with each field operation,” Knuth says. “It worked, but when we wanted to go to strip till using a 12-row strip till bar and 36-row planter, we needed to move to an RTK-based signal for greater accuracy.”

Today, Knuth uses a Claas 2015 Xerion tractor with a continuously variable transmission for strip-till and planting, using a Trimble FMX1000 guidance system. To strip-till, he now pulls a 24 row Blu-Jet AT6010 rig outfitted with row cleaners positioned in front of the coulters and knives. It is equipped with a Trimble implement guidance system to build the strips. He doesn’t apply any fertilizer with his fall tillage pass.

At planting, he pulls a 48-row Deere DB120 planter with implement guidance and Precision Planting seed placement units driven by a 20/20 monitor.

“This allows me to control row by row, where the Deere seeding units controlled rows in groups of three,” Knuth says. “I like every row control because we can vary plant population as we go from irrigated to dry land in the corners of fields.”

In 2018, Knuth plans to go with variable-rate fertilizer application, using Y-drops on his Deere 4930 120 foot-wide sprayer, which is also controlled by the Trimble FMX1000 guidance system.

Point of Pain: The Complexity and Cost of Switching Guidance Systems

Knuth says the move from using the GreenStar system for guidance to the Trimble system created some issues in how the two systems “see” the earth.

“The GreenStar system recognizes the curvature of the earth as it identifies a location, while the Trimble system follows straight lines,” he says. “It took awhile for my wife, Angela, to rework the field maps, shifting some lines to get the modified maps to match the original GreenStar maps.”

Throughout this process, Knuth credits the support he received from Miller, which was key in making the transition as smooth as possible.

“From the first time I met him, I trusted him and he built on that trust. We appreciate that he doesn’t start the meter running for support every time we have a small problem,” Knuth says. “We fully understand the need to pay for support, but he will answer quick questions and we don’t have to worry about being charged a consulting fee.”

Knuth says more suppliers should understand how — in the the long-run — that helps win them business. Without his current precision dealer relationship, Knuth says he likely wouldn’t have switched precision systems. 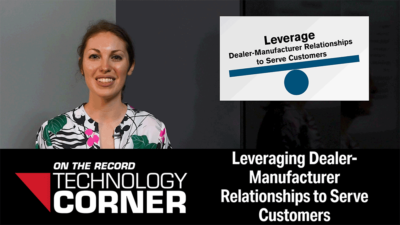