'Send in the Drones' to Protect Soil

Squadrons of drones should be deployed to locate and penalize farmers who let soil run off their fields, a report will say.

A coalition of campaigners complains that the Environment Agency can only check soil on 0.5% of farms each year. Their report says drones can help to spot bad farming, which is said to cost more than £1.2bn a year by clogging rivers and contributing to floods.

The proposals come from the Angling Trust, WWF and the Rivers Trust - with support from the RSPB. Their preliminary briefing has been seen by the Environment Secretary Michael Gove.

The groups say poor farming is the chief cause of the UK's decline in the health of rivers, and a major contributor to flooding. They calculate that investment in stopping soil loss would pay back many times over.

But, they say, Environment Agency enforcement of soil protection is under-funded, and careless farming in remote fields is often hard to spot. The challenge is particularly acute in the West Country where many farmers grow maize on steep slopes. The plants are widely spaced and soil left uncovered between them is liable to be flushed away in heavy rains.

Over-stocking livestock is another problem, as hooves compact fields and create a crust which blocks water from seeping into the sub-soil.

In Herefordshire, a trial drone surveillance scheme is said by the report to have worked well to prevent soil loss. It focuses on maize - and also on potatoes, which exhaust soil and make it more likely to be washed away.

Under the trial, the Environment Agency shifted its local budget towards drones. Guided by a contour map, it identified the areas of fields most susceptible to losing soil in heavy rain.

The Agency offset the cost of drones by handing their farm advisory role locally to the Wye and Usk Foundation.

Simon Evans, a spokesman for the foundation, told BBC News: "When we started to tackle this problem in 2000 we had lost spawning salmon along the whole length of the English Wye. Working with the Agency hasn't only improved soil - it's also benefited fish, because we've now got 65 miles of the Wye with salmon spawning successfully." 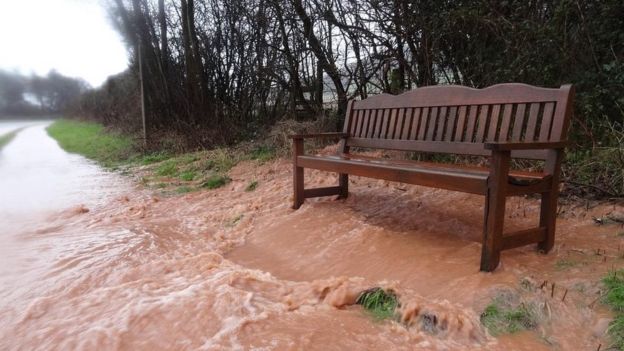 Heavy rain can cause the loss of soil. Photo Credit: Mark Lloyd

The report will urge ministers to replicate this scheme on a national level.

One of its authors, Mark Lloyd from the Angling Trust, told BBC News: "The rules on protecting soil aren't being enforced. We need a baseline of regulation to stop bad farmers doing the wrong thing and to stop good farmers looking over the fence and seeing someone else get away with it. The trouble is that the Environment Agency can only respond to major incidents. But soil run-off is diffuse pollution - it comes in hundreds of thousands of trickles, not normally one big incident."

"What we really need is Treasury support, because for an investment of tens of millions of pounds you get hundreds or billions of pounds in benefit to local councils, water companies, and society as a whole."

The report will call for a strategic approach to land use management in the UK, to be overseen by the new body proposed by Mr Gove to ensure environmental standards post-Brexit.

This would allow different farming practices in different areas. It would lead to farmers in parts of the West Country being incentivized to revert cropland to pasture or woodland to capture rainfall and bind vulnerable soils together.

The groups say farmers who allow soil to run off fields should first be given advice. But if they transgress again they should be prosecuted and lose farm grants.

Farmers who help prevent flooding and increase the carbon content of their soils should be rewarded through the grant system.

One potato farmer, Sam Bright from Woodmanton, told BBC News he had worked with the Wye and Usk Foundation to improve soil conservation through a range of measures, including planting buffer strips of grass round field edges; increasing pastureland; and using minimum tillage, which avoids the traditional method of overturning soil with a plough.

In earlier years, he used to sell off his wheat straw to livestock farmers after harvest - now he chops it and leaves it on the soil surface. "The worms are pulling the straw residue right down into the soil for us. So we've got good organic levels right through the soil profile. It's improving our drainage, our soil structure and our soil health," he told me.

Kate Adams from the Wye and Usk Foundation has been advising local farmers. "The biggest step by far is for a farmer to take the first step in acknowledging that there's something on the farm that needs to be addressed," she told BBC News.

"I don't tell farmers what to do. There's no point me selling them a conservation message if that's not what they are interested in. Whatever advice I give has to go with the grain of what they want to do. And most of them want to improve how their farm works."

The NFU's Diane Mitchell told me: "The awareness amongst farmers about the importance of investing in our soil health is at an all-time high, with increasing uptake in techniques such as cover cropping and minimum tillage.

"The NFU sees good soil health as a key element of any new domestic agricultural policy in the future, helping deliver dual benefits for our productivity and for public goods, such as carbon and soil biodiversity."

A government spokesman told BBC News: "Our farmers work hard to keep our soils rich, our rivers clean and to help in the fight against environmental degradation. We are considering the proposals put forward (in the report) to improve these efforts further.”