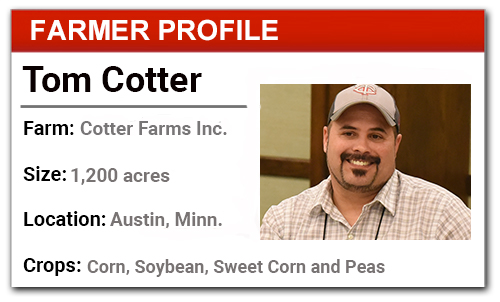 The path some farmers take in their strip-tillage journey is to quickly adopt — and heavily invest in — RTK farm-by- the-inch technology. But for Tom Cotter at Cotter Farms near Austin, Minn., he would rather first get research need vs. want and properly develop prescriptions before going too deep, too fast.

Cotter strip-tills his corn and no-tills soybeans into a growing cover crop. The fields for sweet corn and peas are either minimum-tilled or vertical-tilled in the fall. His foray into organic farming nets him, on average, almost $10 per bushel for corn. “It’s a 3-year process to get a field certified as organic, but I think it is worth it,” he says.

He extensively uses cover crops, seeding a mix of up to 17 different varieties, typically made up of three or four grass varieties, two legumes, two or three brassicas and one type of broadleaf, depending on the field. “If I plan to graze it, I’ll seed it higher than normal,” he says.

The cover crops are planted at the V6 corn stage or vertical-tilled in the fall, depending on the field. Soybeans are seeded with a rotary hoe after soybean harvest.

Cotter seeds soybeans and cover crops with a Gandy 6216 air box that follows a 40- foot rotary hoe. He uses an Ag Leader AF600 to collect yield data in his Case IH 7170 combine.

Cotter had a strip-row unit, but didn’t like how it worked, so he now contracts with the local co-op to build his strips using its RTK signal and an Environmental Tillage Systems Soil Warrior strip-till unit. Then, he follows with a 16-row Kinze 3600 planter that is controlled by a Precision Planting 20/20 SeedSense monitor, though Cotter manually guides the planter.

“The fields are pretty square, so it’s easier to stay on the strip, but it is fatiguing,” he says. “We were planning to go with variable-rate seeding this year, but the season got so late we decided to hold off one more year because it is going to be such a crunch to get crops in, and I am concerned the variable-rate seeding could delay us if it doesn’t work correctly at the start.”

This year, Cotter says his consultant will fly the fields 5 times, combine that data with satellite images and crop yield data and build prescriptions for next year.

Cotter acknowledges that he’s not “that technologically savvy,” but at the same time nothing annoys him more than a planter stopped in a field.

“It’s usually a problem with the monitor,” he says.  “As we go to implementing the information from the FieldView program, I am concerned about adapting to doing things differently. However, my crop consultant, as part of his deal, will also take care of my monitors for me.”

“Right now, investing $10,000-$12,000 into auto guidance doesn’t make as much sense to me as getting solid data on which to make decisions. Once we are there, going with an RTK-based auto-guidance system makes more sense.”