Digging Into the Value of Technology Test Plots

When Redline Equipment, a full-line Case IH dealer with 12 stores in Ohio, Michigan and Indiana, conducted customer research about a year and a half ago, they learned that customers desired more opportunities to interact with equipment and technology prior to purchase.

Soon after, an idea was born — create a test plot for equipment to show products’ capabilities and set expectations for customers.

Redline staff were attending the Fort Wayne Farm Show earlier this year, where Calvin Knotts, a precision specialist with Redline and CCA holder, joked they should use the 5-acre field they owned by their Gas City, Ind., location for a test plot. The idea was overheard by Redline’s marketing director, Heather Hetterick, who believed there was some merit to it.

It was an ideal way to capitalize on customers’ interest in having more product interaction and would set up the perfect content marketing opportunity. Redline decided to plant their test plot and update stakeholders on the progress of their plot through a media campaign.

“We wanted to take the idea one step further, [knowing] that customers didn't want to just stand in an equipment lot and kick tires,” says Arik Witker, precision farming manager with Redline. “They really wanted to get hands-on experience with some of the equipment that they were in the market to purchase.”

The choice came with an investment, however. “We basically laid out the whole structure before we ever started. We wanted to have a good plan, before we ever planted one seed,” Witker says.

Redline planned extensively to determine the economic costs and human power required to manage such an experiment. While the only hard financial costs were for field signs and a weather station, the time investment was much more substantial. “If Redline themselves had to do everything start to finish, the manpower commitment would have been too great,” says Witker.

“If customers say they want to touch and feel the products and see them actually perform, we’re not going to a neighbor’s house to see how their planter performs…” -Arik Witker, precision farming manager, Redline Equipment

They planted the plot with donated seed and the same Case IH 2100 series planter they took to the Fort Wayne Farm Show. “We literally drove it off the lot, myself along with two other precision farming specialists and an intern. We set up the plot and planted it,” said Witker.

The dealership partnered with a local farmer and customer, who had rented the land previously, to fertilize, spray, maintain and harvest the plot, as well as provide equipment beyond the planter. For his work, the farmer will receive the crop grown on the plot.

Perhaps the most significant investment of time comes from Redline’s ongoing customer engagement initiative. Throughout the growing season, precision farming specialists, 2 precision ag interns and a marketing communications intern have been responsible for researching the plot and the creation of weekly media content. Hetterick, the marketing intern and another precision farming specialist have been capturing photos and video with iPhones, a DSLR camera, GoPro’s and a drone.

“Not only are we showing customers the equipment, but also the results of the equipment,” Witker says. Other equipment tested so far includes a Case IH 335 vertical tillage tool, a DJI Phantom Drone and a Magnum tractor hooked to the front of a 16-row Case IH 2150 planter, fully-equipped with Precision Planting products such as DeltaForce and vDrive. 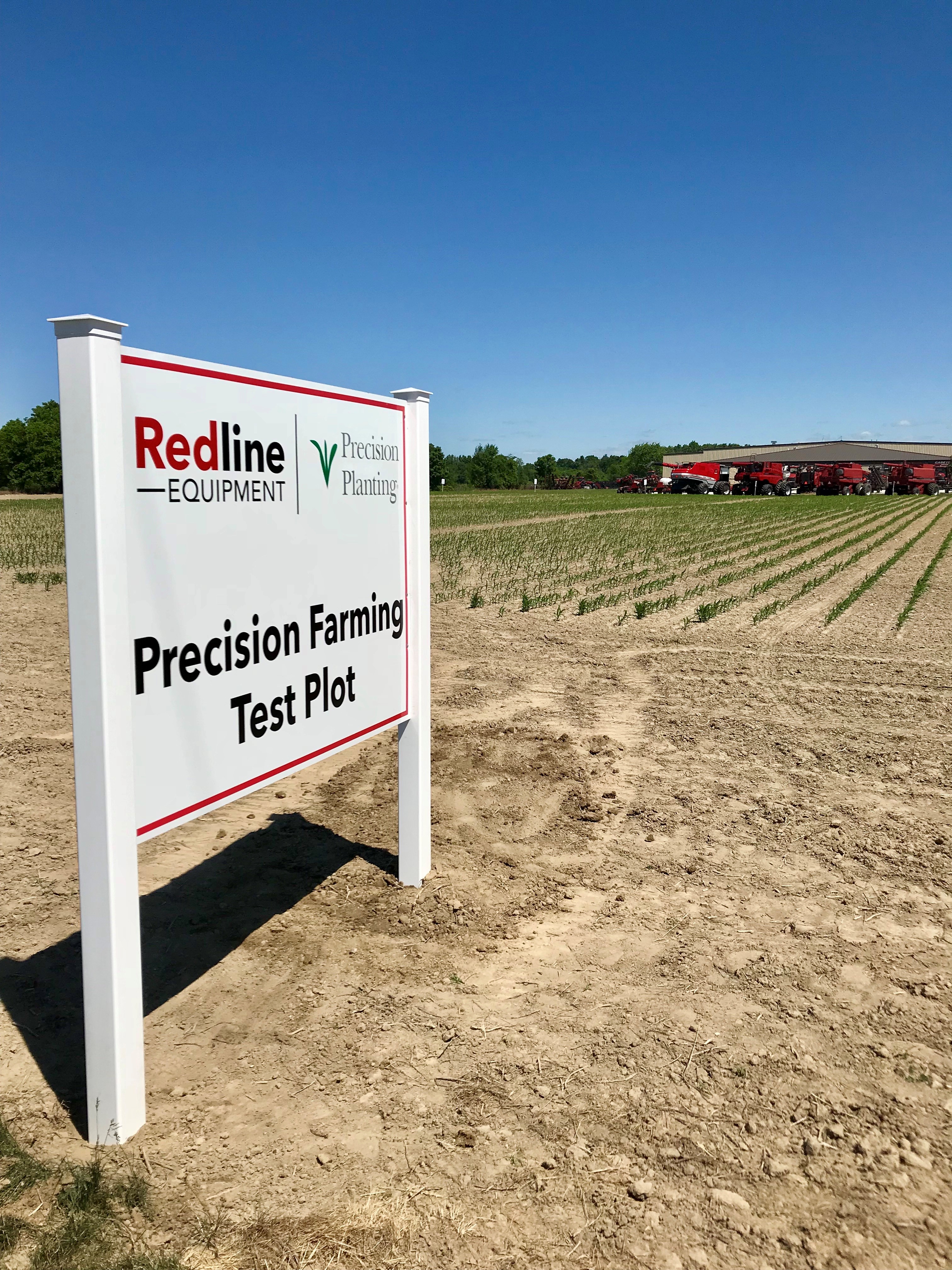 A sign outside their dealership denotes Redline's test plot, where seedlings have begun to sprout just beyond their equipment lot. Throughout their experimentation with the plot, a team of Redline staff and interns have developed media content to showcase their progress and keep their customers updated.

One of the goals of the test plot is to provide a competitive edge for Redline.

“If customers say they want to touch and feel the products and see them actually perform, we’re not going to a neighbor’s house or something to see how their planter performs,” Witker says. “What we're trying to be is as transparent as we can and give them the opportunity to request and get their hands on this equipment.”

Hetterick adds that accessibility of the plot is key. Having the plot on land that was directly in front of one of the dealership’s locations allowed for easy collaboration among staff as well as visibility to customers of the store throughout the growing season, she says.

While there are advantages, Witker acknowledges it’s been a learning process as well. “We made little mistakes in our test plot [such as planting at the wrong seed depth], but the whole concept here is full transparency and we weren’t going to go back and try and fix something just to make it look nice,” says Witker.

He explains that test plots aren’t new in the ag industry, but have typically been developed by aftermarket dealers or chemical and seed retailers vs. full-line equipment dealers.

A key difference between Redline’s approach and other test plots in the industry is that Redline treats their plot as a test plot vs. a “show plot.” “We don’t mention anything about seed variety or fertilizer or the chemical or herbicide that we’ve applied,” says Witker. “We’re really trying to focus on the technology.”

When asked about Redline’s takeaways from their test plot, Witker acknowledged that a test plot is more than simply putting seed in the ground, watching it grow and having a field day at the end. “There's a lot that goes into the data collection and promoting what you're trying to do so you can get that message out at the end of the season.”

Redline’s test plot experiment is still underway, culminating with a field day on July 31, during which they will survey customers for suggestions for future plot testing. While it began in response to customer research, the dealership will continue their plot testing, surveying customers along the way to improve their experience.