Data Management, agronomy and ROI considerations reflected as significant trends through product and service announcements at the St. Louis event.

Here are the top precision products and trends discovered by Precision Farming Dealer editors at InfoAg 2018, hosted at the Union Station Hotel in St. Louis, Mo., this week. 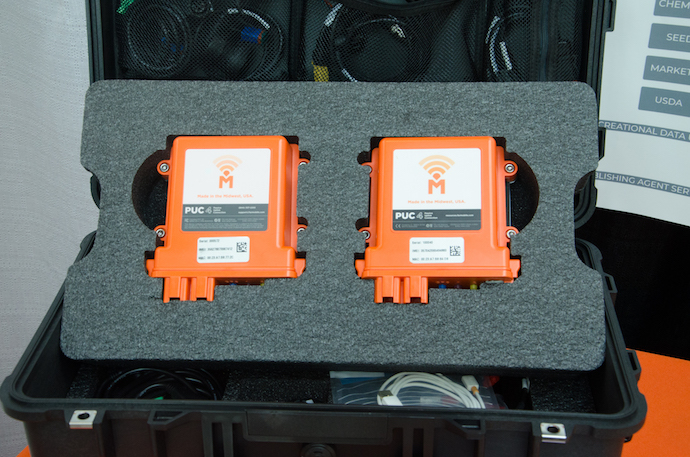 Farmobile subscribers attach a data collection device (PUC) to their machines, compiling data to be formatted into an Electronic Field Report (EFR). Once EFRs are certified, farmers can enter their information into DataStore and dictate bids.

On the eve of the conference, data servicer Farmobile announced the launch of the Farmobile DataStore the first private digital exchange platform for machine and agronomic data between growers and buyers. The setup, as explained by Farmobile CEO Jason Tatge, begins with farmers subscribing to the platform and attaching an uplink connection device to their machines, which then organizes the information into categories based on harvesting, planting, field or location data and more.

Those categories are then compiled into electronic field records (EFRs), giving an accurate overview to both farmers and buyers on effectiveness and efficiency metrics.

Once Farmobile qualifies the EFRs, they are then entered into the DataStore base, which currently holds around one million acres worth of data for sale. From there, farmers hold the power to accept or reject bids from universities, research farms or other buyers.

The announcement comes off the heels of Farmobile’s acquisition of Prime Meridian last week, a precision agriculture data management company out of Nevada, Mo. Tatge explains that Prime Meridian’s assets will be utilized for data analysis and agronomic advising under an offering known as DataServices, intended to improve the efficiency of qualifying DataStore data.

“It made a ton of sense for us start educating a broader audience about what data you should be collecting and how you should be going through the steps of organizing it on the front end,” Tatge says. “We’re also learning that a lot of retail facilities have different levels of data collection at different locations.”

“It's a new opportunity for growers to sell a new crop, and that crop is data. Truthfully, this is new opportunity that growers haven't had in the past, and those that really want to look into it; there is a difference between good and bad data. Good data has value in the marketplace, and truthfully that's what we want to see.

“It's certainly an opportunity that drives other opportunities on the farm. Good data also means good decisions at the farm level, but now there's an opportunity to get $2-$4 ... hopefully $10-$20 an acre per year by selling data in the marketplace. The grower is in control. He makes the decisions on who that buyer is, and whether or not he wants to sell.”

Another industry-first announced at InfoAg 2018 comes from Teralytic, a soil sensor development company, with the release of their wireless NPK sensor. The sensor, as explained by founder and CEO Steve Ridder, is designed to give growers the ability to see underground and examine varying fertility rates.

From there, farmers can understand how much nitrogen (N) is on-hand, enabling them to use data profitably and apply appropriate amounts in different sections of their fields.

“We measure the soil in real-time every 15 minutes and bring it back to online cloud where growers can see their soils and make decisions based off the data,” Ridder says. “We then have an open API that can expose the data into any third-party tool or app that they may be using for prescription data or other case.”

The NPK probe comes in addition to Teralytic’s 02 and CO2 gas sensors, which enables growers to measure respiration and aeration rates in the soil from an enzyme or bacteria perspective. 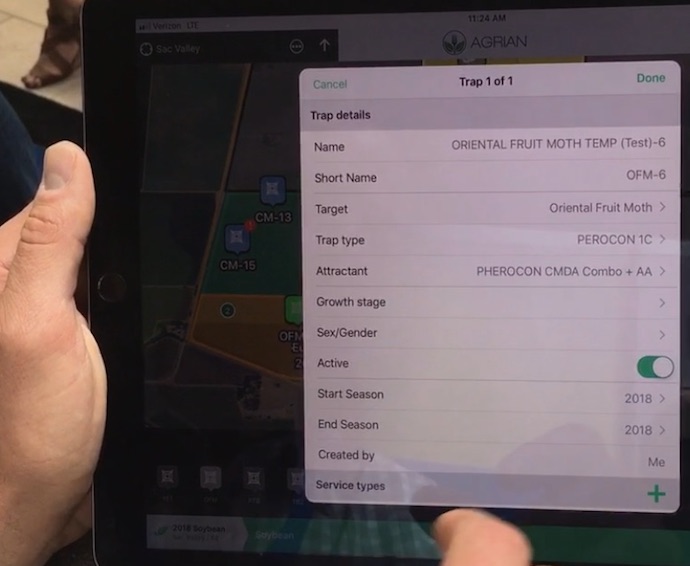 Agrian’s new trap counting feature enables users to save a template for pest type, attractant and growth stage for specific sections of a field without needing to re-log information each time.

Agrian, a crop scouting and pest management servicer, announced an expansion of their pre-existing field scouting app designed to provide growers with real-time agronomic advising on crop health and pest threats. The addition, first announced in June, is a trap counting feature available to current Agrian scouting clients allowing them to track, schedule and monitor all facets of their trap counting personnel.

Users can analyze reports on aggregated data and quickly notice insect-related trends posing a threat to their crops without having to re-log an often repetitive process each time, explains Matt Wilson, Agrian Product Manager for Scouting.

“The old system required you every time to put one of these traps and lures combinations out in a field, usually for trees. You know you're going out there putting it up in the canopy, and then you fill out a form with bunch of information on pest and trap type,” he says.

“It's usually the same information, because as you deploy these things as a scout and agronomist you're usually putting out the same type of trap, the same lure, for the same insect. So now the agronomist can build out a template with same list of attributes every time.”

Originally designed as a “do-it-yourself” soil sampling system, Farm Logic’s Soil Test pro recently made an API agreement with John Deere to expedite the process of setting up fields. The collaboration, says Corporate Sales Manager Brandon Cavins, is providing a platform that enables farmers to set up a work order and assign it to someone else with a specified target date, helping them organize the varying soil tests in a more efficient manner.

“With the API agreement, subscribers to Soil Test Pro can import their information to the John Deere Operations Center, allowing you to edit, delete, or assign work orders on different fields to soil samplers in your area,” Cavins says. “From there they can collect samples and send them off to the lab for you. Once your information is added to the Operations Center, growers have a side-by-side view of their soil reports, seeding maps and yield maps to help them make decisions based on nutrients and yields.”

James DeGraff is an Associate Editor for Precision Farming Dealer. A journalism graduate of UW-Madison, he was an intern for Farm Equipment prior to joining Lessiter Media full time in July 2017. Contact: jdegraff@lessitermedia.com

Kubota Corp. plans to acquire AgJunction, a company that develops guidance, autosteer and autonomy technology, for $72.8 million. AgJunction announced the acquisition on Oct. 8. The company plans to hold a special meeting for shareholders in November to seek approval for the acquisition, and the transition would likely close shortly after approval.
View More
Top Directory Listings