By Clair Urbain posted on August 13, 2018 | Posted in Industry News 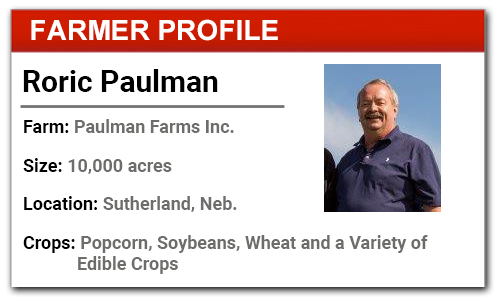 Roric Paulman grows a wide variety of crops on 10,000 acres in the Sutherland, Neb., area. About 85% of the cropland is irrigated and he and his son, Zach, practice no-till or strip-till across all crops.

Strip-till is completed with an Othman 1tRIPr outfitted with 10-inch mole knives that variable-rate apply fertilizer based on grid samples and prescriptions developed by the Pioneer Encarta platform, run through the GreenStar 2630 monitor in the tractor cab.

The Paulmans use a variety of information services to capture field data, including a subscription to Climate FieldView and to MyJohnDeere.com for equipment telematics.

“We have it set so all the data is uploaded to the cloud,” Paulman says.

Depending on the crop, they come back and apply up to two applications of fungicide and foliar-applied nitrogen (N) with their Deere 4045 sprayer with 120-foot boom.

Application rate is controlled by Row Command swath shut-offs. At harvest, the Paulman’s capture yield data with a 2630 monitor on their Deere 680 16-row corn head or a 640 combine outfitted with a flexible draper head.

“The data feeds into several places and is all sent to the cloud,” Paulman says. “We also use Granular farm management software to record inputs that picks up this information as it is applied.”

They also use WagNet to control irrigation pivots. Based on information from Deere’s Field Connect moisture monitoring units, Paulman can monitor moisture levels throughout the root zone of a monitored field.

“We can vary irrigation rates and we can also variable-rate apply fertilizer or insecticides through the pivots,” he says.

Those applications are based on information gathered from Planet Labs, which uses satellite imagery to identify N availability and recommends additional applications as needed.

“We are the number one irrigated state in the nation, and everyone is looking to us for best stewardship of water. It’s best managed with good information,” Paulman says.

To monitor grain condition in storage, they use IntelliFarms’ BinManager.

With as many tools as they have in their precision farming arsenal, Paulman says they can’t make effective crop management systems without each piece of collected information — but it comes at a cost.

“We pay $22 an acre in telemetry fees. Every moisture probe has a connection fee and we have more than 70 gateways to gather information,” he says. “We produce a terabyte of farm data a month with these systems. Collecting this data is expensive so we need a low-cost communication system. The actual equipment, such as the sensors, is the cheap part.”

Paulman suspects that a fully connected farm that he and his son are working toward, is what consumers increasingly want. This is especially true given their diverse crop rotation, which includes chickpeas, chia, potatoes, edible beans, sunflower and sugar beets.

“Consumers are expecting high quality produce. The data can show geo-references and validates how that crop was produced,” Paulman says.

While some farmers have concerns about sharing data, Paulman is comfortable with the process, but also isn’t sold on the comparative benefits.

“I have no fear of it. If anyone tries to benchmark against me, it’s not going to make much sense because every farming operation is different,” he says. “What works for me probably won’t work well for others.”