Aggressive Precision Evolution Not Without its Setbacks

By Clair Urbain posted on November 7, 2018 | Posted in Industry News 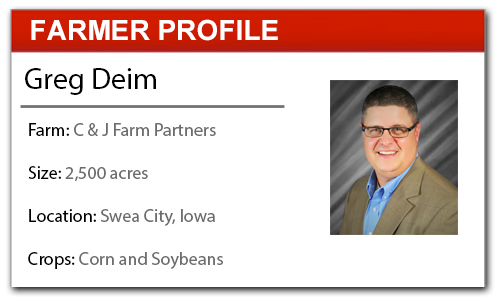 Greg Deim, who farms with his father, Craig, and brother, Justin, has been using precision farming equipment almost since its inception. “Dad always was an early adopter,” says Greg.

While Craig and Justin are the primary operators of the business, Greg uses his training and experience to help the family take best advantage of precision equipment. He has a degree in agricultural systems technology from Iowa State University, and worked with Cargill on developing variable-rate fertilizer systems.

In 2009, he moved closer to home to work with his family and also offer precision farming services under his company, Ag Guidance Consulting.

The Deims’ family farm has a mix of brands and equipment. They built their planter from scratch, starting with a 24-row White toolbar and added a custom rail that accommodates Kinze row units with Precision Planting vSet2 seed units and Delta Force down pressure units.

Using a 20/20 SeedSense monitor, they can vary population. In 2018, they added CleanSweep row cleaners and SmartFirmer sensors. The starter fertilizer can be variable-rate controlled with the Trimble FMX system that also controls the steering system in the Challenger MT765 tractor.

“We find the variable-rate fertilizer makes a difference on different soil types,” Deim says.  Fertilizer is applied in part by the local-co-op in a weed-and-feed application, some starter along with the planter, then anhydrous applied between V4 and V8 stage corn with their 24-row Fast liquid fertilizer applicator. As needed, they will come back and variable-rate apply additional nitrogen (N) using their RG1300 RoGator that has a Raven guidance and variable-rate monitor.

At harvest, the 20/20 monitor and Trimble FMX guidance system are moved to their John Deere S680 combine.

They have been involved with the Climate Corp.’s FieldView to fine-tune their seeding rates. “We are going into our fourth year of collecting data,” Deim says. “The first year, I wrote the prescriptions based on what I thought they should be. Then the second year, I relied more on the program’s recommendations and, last year, our seeding prescriptions were mostly based on the FieldView recommendations. In 2019, we plan to use the program’s recommendations across all our acres.”

Deim says they like the data collected from the FieldView platform, but when he wants to look at variables, he takes the data into Ag Leader’s SMS program, which requires time and patience — especially with data flowing in from a number of sources on the farm.

“We have data coming from the 20/20 monitor, the Raven unit in the sprayer and the Trimble FMX system,” he says. “Getting data combined from those different sources is time-consuming, even for a quick look.”

Because the Deims have a mixed fleet that uses a Precision Planting monitor, a Trimble FMX unit and a Raven controller, Greg finds that he must physically gather the data from each unit, then combine it into one usable file. “It takes a while to get all the data in a form in SMS that allows use to start asking the ‘why is that?’ questions.

Greg also finds that a common problem farmers have is inconsistent naming conventions. “We have one field that is named ‘Deim North’, ‘Deim N’ and ‘deimnort’ on different monitors and when we bring the data into Climate 20/20, it is called ‘deimnorth’. Although I know how to rename the data, it can get confusing and that’s where many of my customers give up. Keeping data clean is critical,” he says.