By Clair Urbain posted on January 25, 2019 | Posted in Industry News 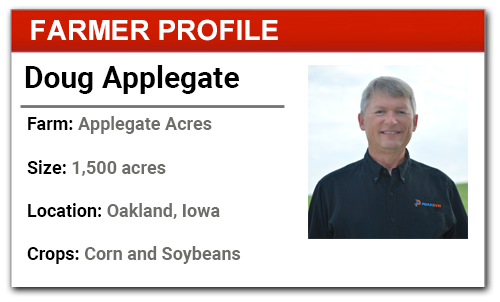 They also own and operate Praxidyn, which makes and sells the Mixmate chemical blending system and Intersect cloud-based data program, which transfers in-field data to allow management from the office.

They farm 1,500 acres near Oakland, Iowa and have moved from no-till corn and soybeans to strip-tillage. It’s been an evolution that they are continuing, not with the latest generation of precision equipment, but with tools that work for them.

“We started doing our own grid sampling in the early ’90s and in 1996 started gathering data with a yield monitor and starting building maps ourselves,” Doug says. The next year he built a wiring harness so the yield monitor could be used with the planter to track which corn hybrids were planted where.

Their first strip-till unit had an inline ripper that ran about 12 inches deep followed by a coulter that made a beautiful berm that turned out to be too loose. “The corn looked great until a mid-summer storm came through and the stalks tipped over right at the root base. We knew we had to change something,” Doug says.

The next strip-till unit started with a strip-till cart that Luke built. Using his training and experience he gained while working on 4-H and FFA projects in the family farm shop,  Luke came up with a 3-point hitch-mounted cart that rides on 4 floatation tires and carries a 6-ton Montag dry fertilizer box with double augers and drives.

“We wanted a unit that wasn’t too long because we work a lot of terraces and would have problems with a long, strung-out design,” says Doug. To minimize drafting issues, Luke designed the strip-tillage cart’s tongue to match the length of the planter tongue. “That way, both units draft similarly on hills and terraced areas,” Doug says.

They equipped the 16-row rig with a knife that turned out to be hard to pull, even with their Case IH 315 tractor. That same season, they leased the 315 and bought a Case IH 340 to pull the unit; but pulling the strip-till rig was still a challenge.

“We were only going about 3 mph with the smaller tractor and the knives seemed to compact the soil wall,” Doug says. “We’d dig down and find actual voids in the strip.”

By chance, Brent talked to a friend about their issues with their strip-till unit. His friend worked with Prescription Tillage Technology and suggested using its Saber Tooth Insert (STI) blade on the strip-till unit.

They also added a 1¼-inch diameter pipe that’s been slightly flattened and follows behind the coulter placing the fertilizer into the strip. “It gets placed about 5 inches deep and the action of the STI coulter creates soil action that really mixes it and makes a new seedbed,” Doug says. “Now, we can run at 7 mph and we burn a third less fuel.”

They plant with a 16-row Case IH 1200 planter purchased in 2004. It’s outfitted with Ag Focus Planter Pro row cleaners that Doug says do a great job and can travel over any badger hole or other field obstacle without plugging.

Instead of using electric or hydraulic row shut-offs, Doug designed and made his own by cutting out the wall plate that separates the seed drop tube from the seed pool and replaced it with a plastic door with a living hinge actuated by an air cylinder. When the row is shut off, the seed simply recycles back into the seed pool until it’s turned on again.

“It was one of the few things we’ve made that worked the first time and we never had to re-engineer it,” says Doug. They have a patent on the design but haven’t taken it to the market.

Point of Pain: Too Many A-B Lines

The other issue, especially with terraces, is they have so many A-B lines, he says.

“In an 80-acre field, we can have 15-20 tracks from which to choose. It can be a hassle, so in some fields we end up free-handing the first round and the point rows instead of trying to figure out which track to follow. But bigger fields, we’ll always use the GPS,” Doug says.

Taking Stock of 2020: Banking on Business Innovation to Stay Progressive with Your Precision Priorities