Home / Blogs / From the Virtual Terminal / Are You Feeding the Appetite for Precision Adoption?

Are You Feeding the Appetite for Precision Adoption?

By Jack Zemlicka posted on March 26, 2019 | Posted in Industry News

While there is still a mix of optimism and skepticism surrounding the overall farm economy, one bright spot could be the precision farming segment.

We’ve all heard about the next-generation gadgets and concepts which will revolutionize farming. But there are current technologies which farmers are looking to add, which means dealers have an opportunity to capitalize on as we head into the second quarter of the calendar year.

Respondents to the recently released 11th annual No-Till Farmer Operational Benchmark Study, forecast increased adoption of 11 different precision technologies in 2019, compared to last year. The biggest mover being variable-rate fertilizing, up more than 10% from 2018 to 45.1%, followed by use of satellite aerial imagery, up more than 9% year-over-year to 27%. 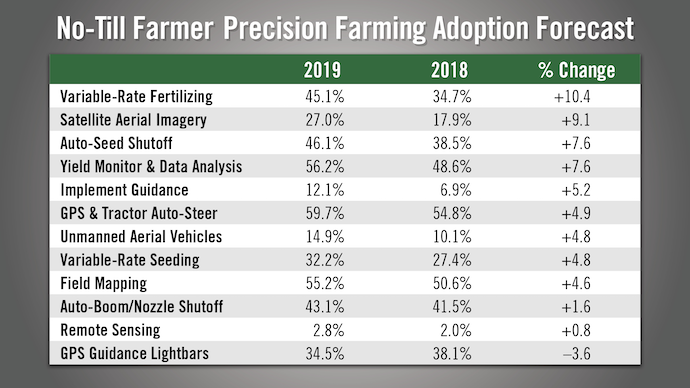 Also up more than 7% are auto-seed shutoff to 46.1% and yield monitor and data analysis to 56.2%. While only 12.1% of respondents plan to utilize implement guidance, it’s nearly double the 2018 percentage.

Two other emerging technologies trending upward are unmanned aerial vehicles at 14.9% and variable-rate seeding at 32.2%, with both seeing expected adoption growth of nearly 5%, according to the study.

So how do the broader adoption of precision practices correlate to no-tillers’ expected technology purchases in 2019? The benchmark study revealed that on average, respondents are planning to invest about $2,600 per farm on ag technology.

This total is about $500 more than initial 2018 forecasts, but only about $100 off of the per farm average of just over $2,500 reported in this year’s benchmark study.

A new category added in 2018 tracked precision service expenditures with respondents spending an average of just over $3,000 per farm. That total is forecast to decline to about $2,400 in 2019, according to the study.

However, it’s worth noting that survey projections made at the start of the year, don’t always coincide with end of the year totals and historically, actual precision expenditures have exceeded initial projections.

Are You Prepared for the Next New Norm?