Home / Blogs / From the Virtual Terminal / Tesla's Vegan Interior: a Good Idea; a Bad Idea; and a Marketing Gimmick

Tesla's Vegan Interior: a Good Idea; a Bad Idea; and a Marketing Gimmick

Tesla recently announced that the Model 3 would now be available as a “100% leather-free” model, meaning that no leather was used in the interior. When hearing this, at first I thought, “Well that’s interesting.” But later I realized, there was nothing really unique about this announcement. Let me explain the good, the bad, and the meaninglessness of this news. 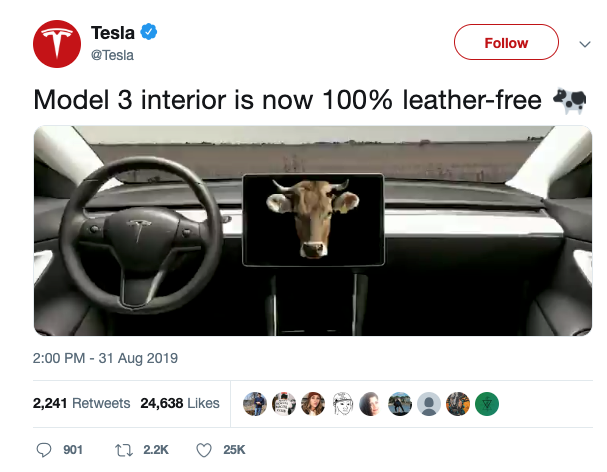 A Good Idea. Leather has been fashionable in cars for years. You can get leather seats in highest-end Bentley Continental or lowliest Toyota Corolla. Some cars do not even offer a non-leather option. That is a mistake. As a boat owner, I have often wondered why more car makers don’t offer vinyl seats like boat makers. On boats, vinyl takes a beating from sun, sunscreen, drink spills, sand, and dirty feet. Vinyl seats clean up nicely. Leather, by contrast, is often inconsistent in thickness, shows scars and takes maintenance to keep looking nice. Vinyl is also less expensive, judging from the premium car-makers charge for leather seats. Vinyl may not feel as luxurious, but for everyday use, it works pretty well and costs less. So it makes sense that Tesla would use vinyl instead of leather in the Model 3 (assuming that is what it is), which it seeks to sell to the masses. I wish more car makers offered non-leather options for car interiors.

A Bad Idea. When I first read the Tesla “vegan” interior story, I thought that Tesla was taking the line that a 100% vegan interior was better for the planet. That is the feeling I got from the articles about it. But that may not have been the case. TechCrunch says the move was response to PETA shareholders. That’s too bad if just a few shareholders can force their corporate change. Leather is an all-natural, renewable resource. At the most basic level, the sun produces grass, grass feeds cattle, cattle produce leather as a byproduct of meat. Tesla is all about “entire sustainable energy ecosystems.” I do not know how Tesla’s “synthetic” leather-alternative is made, but typical vinyl fabric is made from fossil fuels. Much of the world is comprised of “marginal land” that has few uses, but raising cattle and other ruminants is one of them. How is cattle leather not a better, more sustainable alternative for the environment than factory-produced pleather?

A Gimmick. Most of Tesla’s technological advancements are big—such as all-electric drive, autopilot self-driving technology, a national supercharger network, etc. A vegan interior is not in this category. You know what else had a “vegan” car interior? — the 1984 Dodge Omni I drove in college. I guarantee you could not find an ounce of leather in its Lee Iacocca interior. Non-leather interiors have been around since at least the 1950s. Had Tesla announced that its Model 3 now is now available with a 100% fully “pleather” or “vinyl” interior, I doubt many people would have seen that as an improvement on the status quo. 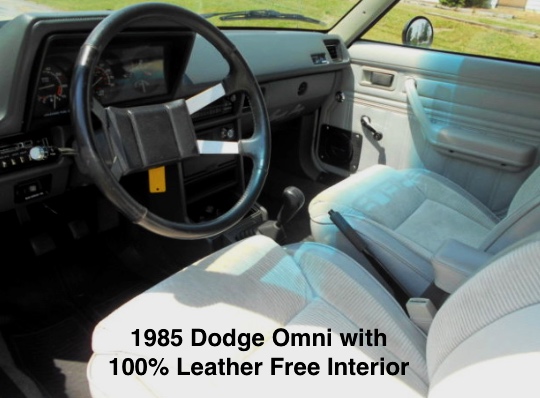 Please do not take this the wrong way. I am a big Tesla fan and I think the company is revolutionizing the car industry (eventually this will change the ag industry too). And I think the people ought to have a choice in the materials used in their cars. Vinyl (or cloth) can be a good alternative to leather.

But if your goal is to save the planet, a vinyl steering wheel cover is not going to make a dent. We should — and Tesla should — focus its sustainability efforts elsewhere.

Is Vertical Integration Good or Bad for AgTech?

Troubleshooting: There's Never a Good Time to Be Down