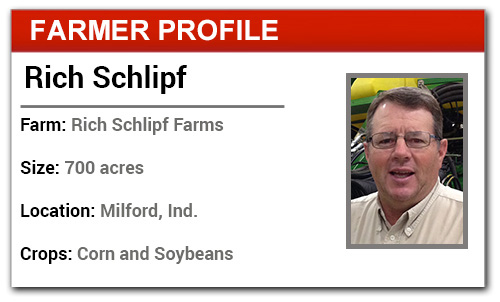 Rich Schlipf, who heads up Rich Schlipf Farms Inc., near Milford, Ind., could be characterized as being on the bleeding edge of precision agriculture. “Although we farm only 700 acres and custom-plant about 700 acres a year, we are over-equipped,” he says.

Schlipf also operates Schlipf Precision Ag, which primarily serves farmers throughout Northern Indiana and southern Michigan. To that end, he is always trying new equipment to prove its ROI or bushel response so he can share that with customers.

“Our fields are more like research plots,” Schlipf says.

He currently uses an Outback RTK system for GPS controlled auto-steering, variable- rate seeding and fertilizer placement. Almost all fields are no-tilled, however, he is trying some strip-till plots so he can share that data with his clients.

He uses annual ryegrass as a cover crop on all of his acres except muck peat soils. “We use cover crops to help break up compaction and improve organic matter,” he says. The muck soils don’t need more organic matter.”

His older AGCO RoGator 854 self-propelled sprayer has an Outback system that uses a WAAS signal for steering and boom section control. “We use it for cover crop burndown, pre-emergent herbicide application and nitrogen (N) application with 360 Yield Center Y-drop nozzles at the V8 to V10 stage in corn,” he says.

Schlipf has extensively modified his John Deere 1770NT 16-row planter, primarily with Precision Planting equipment. “We have vSet Select seed meters, vDrive variable-rate, DeltaForce hydraulic down pressure as well as Clean Sweep on the floating Yetter row cleaners,” he says. “Every year, we are trying new products, some of them are prototypes, to test the equipment and research whether it makes a difference.”

This year was the third season he has tried multi-hybrid seeding. Schlipf says the verdict is still out because of wet conditions, and he has yet to analyze 2016 data.

At planting, he applies two types of fertilizer, one is a straight rate and the other is a variable-rate based on yield and CEC soil maps developed by Schlipf’s SMS advisor. “I review the maps and tweak them,” he says. “There are some things you know about a field that you can’t see on a computer screen.”

At harvest, he runs a Deere 9760 combine that uses the same RTK signal for auto-steering in soybeans and Headsight Inc.’s Truesight row guidance as well as auto-head height control in corn. He also uses the Climate Corp.’s FieldView app to record yield data from his trial plots as well as record field observations.

Point of Pain: Getting What You Pay For

With experience both selling and using precision technology, Schlipf says it’s extremely important to test and field-prove the equipment and services he sells to other farmers.

“Some people can understand how this equipment works without using it firsthand,” he says. “I want to use it so I understand it really well. If we can’t solve a problem the customer has, we try to put them in contact with a specific person at the technical center instead of just telling them to call tech support. We want to be the first one a grower calls. I think that gives our business an advantage over other precision farming dealers.”

Schlipf has had issues getting equipment support from suppliers over the years. One company refused to answer calls or emails after he notified them that their add-on equipment simply didn’t work.

“I gave up trying with that company,” he says. “I am not the type of person who spreads bad news, but when a company doesn’t stand behind its products, how can I sell it to my customers?”

Ask Questions to Avoid a Disconnect with Customers

Making the Most of On-Farm Service Visits