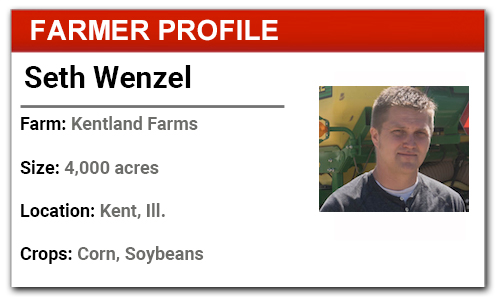 Seth Wenzel and his father, Brian, are transitioning to strip-tilled corn and no-tilled soybeans on the 4,000 acres they farm near Kent in northwest Illinois.

"We've been making the transition over the last five or six years, no-tilling soybeans into standing corn stubble and then strip-tilling corn into soybean stubble and second-year corn," Seth says.

He also operates Harness Technologies, which sells and supports a variety of precision equipment for agricultural and construction customers. Although Wenzel is keenly familiar with the selection and operation of precision farming components, he is like other farmers who occasionally run into bumps getting the equipment to work how he thinks it should.

The Wenzels run a 24-row DB 60 bar with Redball strip-till units and apply anhydrous in the fall over soybean ground. They will strip-till corn acres going back into corn in the spring using the DB60 bar as well as a smaller 12-row Case IH NTX5310 strip- till bar with Case IH row units, applying anhydrous through a Raven dual-cooler setup.

"If we are building strips in the fall, we try to build them as high as we can,” Wenzel says. “We even take the rolling baskets off the unit for the strips built in the fall. They settle quite a bit over the winter.”

In the spring, they apply most of the fertilizer and seed corn in one pass. Their primary planter is a 24-row Deere 1775 with ExactEmerge row units. A Deere 2630 display controls the main planter functions; an Ag Leader InCommand 1200 controls the RTK steering, in-furrow starter and the 2-inch-by-2-inch starter application.

"The tractor is outfitted with two 380-gallon tanks and there's another 800-gallon tank on the planter, and two 250-gallon tanks on the wings,” Wenzel says. “We also pull a 1,600-gallon Yetter all-steer cart behind the planter. With the ExactEmerge row units, we can travel up to 10 mph and maintain accuracy. With our other planter, the fastest we could go was 5½ mph."

They variable-rate fertilizer with a separate pass with floater spreaders, based on prescriptions developed by the local ag service company. While the planter is capable of variable-rate seeding, the Wenzels have yet to add that to their planting regimen.

"We use several brands of seed corn, and we'd need a prescription written for every one of our fields based on the corn variety," he says. Soybeans are planted with two Kinze 3600 16- and 31-row interplant planters set up on 15-inch rows with brush seed meters.

For weed and insect control, they use a Challenger RoGator 874 SS with a 100-foot boom, but Wenzel says they want to go to a 120-foot boom so they can more effectively control traffic.

As a farmer first and a precision equipment dealer and supporter second, Wenzel finds unplanned breakdowns most annoying.

"The more planning you do upfront, the better off you'll be. Think through the systems and what could fail or need replacing?” he says. “What's the order time on some items? When it's April 10 and you have a problem and the part won't be available until April 15, that's valuable time lost that could have been avoided with some planning.”

The Wenzels use Ag Leader's AgFiniti data transfer system, finding that it simplifies coordination in the spring and fall. The corn planter row units are compatible with the GreenStar 3 controller, but the soybean planter is outfitted with Ag Leader components.

"I like the display and interface with the soybean planter better. We have Ag Leader harnesses on the tractors and the combine so we can swap out the monitors easily,” Wenzel says. “The Deere interface works well with Deere equipment. But I also need systems that work better with more brands."

From Big Data to Bigger Data — Should You be Concerned?