The Minneapolis Star Tribune ran a story this month about how many farmers prefer older, simpler, equipment to modern tractors that are vastly more complicated and more expensive: "For tech-weary Midwest farmers, 40-year-old tractors now a hot commodity." The article spread on the web in short-form versions with their own unique spins: in Vice (Farmers are Buying 40-Year Old Tractors Because They are Actually Repairable), Jalopnik (Classic Tractor from the ‘80s are Becoming Popular with Farmers Sick of High-Tech…), Popular Mechanics (Why Farmers Still Insist on Buying Really Old Tractors) and countless other locations.

I first read the article in Car and Driver, an automotive publication, which titled the story: “Midwest Farmers are Tired of Tech-Loaded Tractors They Can’t Fix.” As someone that writes about ag-tech, this sort of Luddite-themed headline grabbed my attention. Are farmers really ditching new, high-tech tractors for 1970s and 1980s models?

The original Star-Tribune article explains why older equipment does appeal to some Midwestern farmers:

The other big draw of the older tractors is their lack of complex technology. Farmers prefer to fix what they can on the spot, or take it to their mechanic and not have to spend tens of thousands of dollars.

“The newer machines, any time something breaks, you’ve got to have a computer to fix it,” [farmer] Stock said. 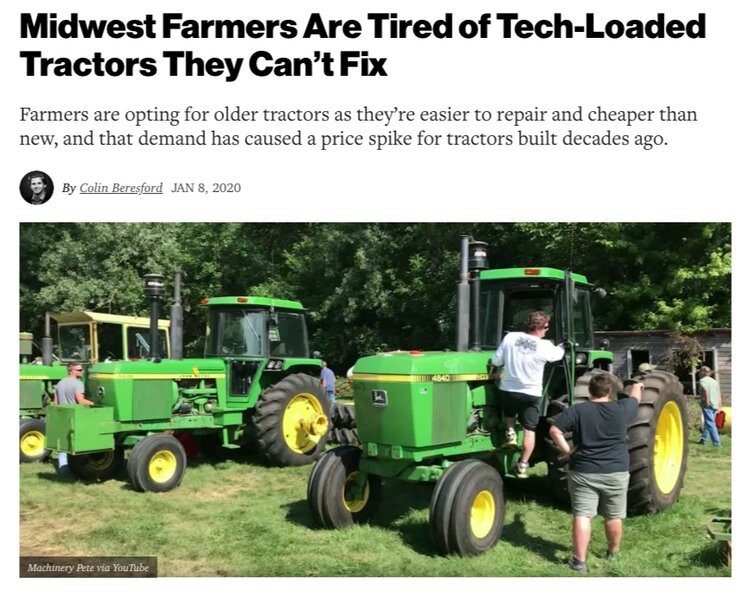 Repairability is certainly an issue for some farmers, but it is not the whole story. Greg Peterson (a/k/a Machinery Pete) pointed out in the Star-Tribune that 1970’s and 1980’s tractors were built to last for decades, with proper maintenance and upkeep. We should also not overlook that today’s older generation of farmers view machinery from the ‘70s and ‘80s with nostalgia, and they are at a time in their lives when many can afford machines they dreamed about owning in their younger years. Prices for low-hour, well-maintained older tractors have been strong at farm auctions. As a long-time watcher of Machinery Pete’s show, I can tell you that this has always been true. (Full disclosure, I have my own nostalgia for 1970’s and 80’s tractors). There are many good reasons to buy older iron.

My takeaway from the article, however, was not that farmers buy older tractors because they are fed up with new technology. They buy them because they can still do many jobs on the farm.

You can still grow midwestern crops (corn, soybeans, wheat) with 1980’s equipment. It may take more fuel, longer hours, and be less precise, but it can be done. Unlike cars that eventually rust away (due to winter salt in my part of the world), older farm equipment can last decades with proper care. You can keep replacing parts on that 1979 John Deere 4640 forever.

The electronics and software on modern tractors differentiate them from machines built 30 years ago, but overall, the modern tractor design is an incremental, evolutionary improvement of the design that the industry settled on in the 1970s—diesel powertrain + operators cab + modern hydraulics. We have not reached a moment where a new tractor’s software or design is so revolutionary that older tractors are obsolete.

In contrast, that point is quickly arriving with passenger vehicles. Drive a new Tesla and it is immediately evident that the all-electric powertrain and self-driving software have changed the entire concept of what a “car” is. When EV range improves and fully autonomous driving is approved, older cars will become relics.

When I read the Star-Tribune article, my immediate thought was that, when it comes to tractors, we just keep producing an incrementally better machine every year. Constant evolution, but never revolution. When will we hit the transformative point where the software or design makes the 1980’s tractor obsolete?

Perhaps that is why John Deere’s latest tractor concept was not a traditional design, but an electric, driverless, double-tracked machine. Something like that would be revolutionary.

Car and Driver pointed out that no one who buys a Tesla expects to do the maintenance. I think agricultural machinery, too, will someday reach this point. But until the revolutionary tractor arrives, the 1970’s and ‘80’s machines will soldier on.

Thoughts from the (Ag Data) Road