By Todd Janzen posted on July 1, 2021 | Posted in Data Management

Farmers are given many reasons to collect ag data about their farming practices, but using that data in court is rarely one of them. However, at a recent trial about crop damage, we proved just how useful ag data can be to help a court understand complex multi-year, multi-field farming operations.

Our case involved a lake dam that had been mismanaged by the Indiana Department of Natural Resources (DNR). About a dozen years ago, the DNR established trigger levels for when to open and close the dam, but these trigger levels raised the summer lake level significantly. This was a big problem, as farm field drainage tile in the area was designed for the previously established, lower (and correct) lake level. Raising the lake level made this field tile ineffective. Fields would flood when they could not drain after significant rainfall events, leaving standing water for days.

Before the advent of precision ag and data tools, proving intermittent flooding damages like this would have been very difficult. For example, a 100 acre cornfield might have 20 acres underwater for 10 growing days, resulting in little yield, but if the rest of the field yielded 240 bushels per acre, the average for the entire field would have been 192 bu./acre. ((80 acres X 240 bu./acre) / 100 acres = 192 bu./acre). 192 bu/acre. does not necessarily appear as a significant loss for a field.

Using ag data told a different story. With harvesting data, the court could see exactly where the flooded areas of the field were and how flooding affects yields. Below (left) is an example, showing the lower yields in red and better yields in green, and few areas with no yield. On the right, the same data is overlaid with soil type and averaged to show that flooding, not soil type, was the reason for the drag in yield in parts of the field.

We also used drone photos to ground-truth the data. Here is a photo of the same field on the same year about halfway through the summer, showing the flooded areas as light green. The combine yield data confirmed the impact that was obvious from the sky. 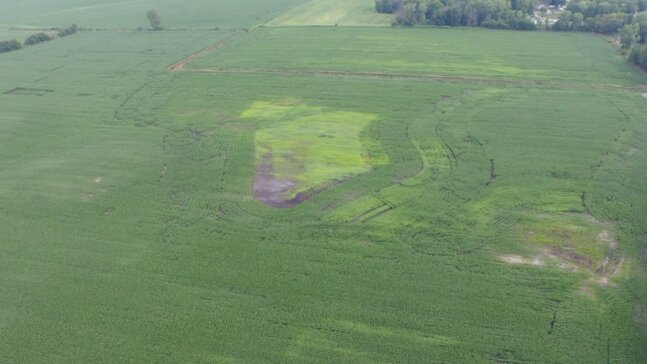 Our case was complex because crop damage and yield loss were highly variable across different parts of the affected fields. One part of the field would yield well, while another part would yield little or nothing. Without ag data, telling this story would have been difficult, if not impossible. We also used comparison data from nearby fields that did not drain into the lake watershed to show what the yield would have been, but for the elevated lake level. Ultimately, the court agreed that raising the lake level impacted our client’s farming operation:

At trial, the court awarded our farmers $485,644 in crop loss and field tile damages.

We may not think of ag data as having an evidentiary value in court, but I cannot imagine a case about crop damages without it.

Are NFTs the Answer to the Ag Data Ownership Question?

How the Ag Data Landscape has Changed in 5 Years