By Clair Urbain posted on March 19, 2015 | Posted in Precision Sales

When Joey Hanson wanted to get into strip-till on the family farm in southeastern South Dakota, he and his brother had a hard time justifying the equipment cost. “Strip till units are expensive, and the only way we could justify it would be to do some custom work with the unit,” he says. 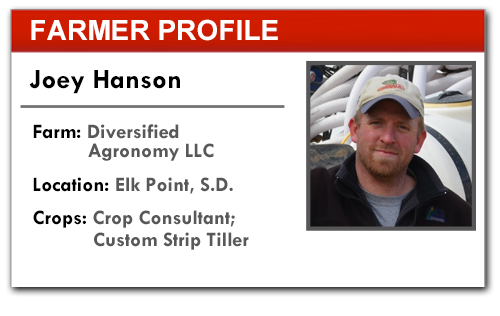 Hanson is a certified crop advisor, serving farmers through Diversified Agronomy LLC, his consulting firm. His brother has been involved with precision equipment for many years and between the two of them, they selected a system that works best for their operation as well as custom strip-tilling with optional variable-rate fertilizer application.

“We are an anomaly,” Hanson says. “We were familiar with the equipment before we bought our first unit and have had little trouble with it.”

The Hansons are strip-till pioneers in an area where conventional tillage is prevalent. “Farmers tried strip-tilling with tillage tools they made with anhydrous bars before auto-steering was available. It didn’t work,” Hanson says. “It gave strip- till a bad name in this area, but I think auto-steering and the right equipment will make the practice more popular.”

Hanson strip-tills for farmers as far as 60 miles west and 40 miles to the north of Elk Point. To do so successfully, they didn’t want to have to subscribe to several RTK services to get accuracy or transport a receiver that had to be set up in every field.

“We are getting plus or minus 1.5 inch accuracy and the system hardly ever goes down,” Hanson says, “We are finding that farmers are able to follow the rows well, even if they are steering manually.”

To assure he has A-B lines properly aligned, Hanson first sets up in the field and then makes a few passes with the implement out of the ground to see how his system aligns with the field rows or the A-B line from the farmer.

Some clients don’t have auto-steering or use John Deere’s StarFire2 signal for planting guidance, but almost always have no problem following the strip-tilled band, Hanson says.

While the CenterPoint system doesn’t offer true sub-inch accuracy, after 2 years of operation, Hanson says farmers are able to plant into the strip easily. “Following the A-B line in corn stalks is crucial, but it’s less of an issue in soybean stubble,” he says.

Hanson says variable-rate fertilizer is becoming more popular with his clients; he believes having just one brand of precision equipment controlling steering and fertilizer rate makes it easy to implement.

“My brother knows the headaches of attempting to mix brands of equipment,” Hanson says. “We found the equipment we need by asking many questions.

“We have built up a relationship with the dealer and can get answers. It was frustrating, though, when the Cat dealer’s technicians and Trimble technicians were pointing at each other when the tractor had a hard pull to the right in the field.

Finally, the Trimble technician figured it out. That finger pointing is frustrating, especially when field work needs to get finished.”