By Clair Urbain posted on January 7, 2016 | Posted in Product Innovations 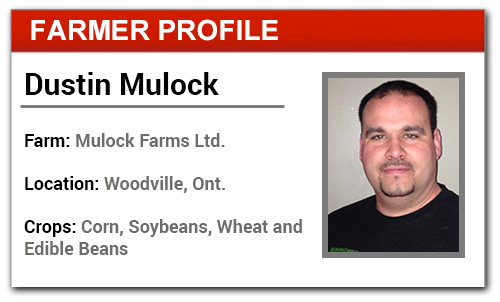 Dustin Mulock, who farms with his father, Carl, near Woodville, Ont., is on the lookout to find ways to improve soils while reducing the horsepower needed to plant crops. While they are fans of strip-till, they find using a modified John Deere 2510h anhydrous bar with a 20-inch oversized coulters can accurately place fertilizer while using less horsepower.

To maintain accuracy, they rely on an RTK signal from a StarFire 3000 transmitter with a signal booster on their grain leg. They use GreenStar 2630 controllers in their tractors, self-propelled sprayer and combine.

“The booster allows us to follow the signal as far away as 13 miles,” Mulock says. “Without it, we had to use a base station in fields more than 9 miles away. That was pain because the base station had to be set up correctly, and often meant hand-carrying the unit to the high spot that was often in the middle of the field.”

They have been gathering yield data since the late 1990s and use Apex software to build variable-rate maps for fertility and population. The system is compatible with their variable soil types, says Mulock.

Up until a few years ago, Mulock says they were “flying by the seat of our pants with this technology.” But when their equipment dealer started offering training classes, it improved their learning curve.

“The classes help us understand the equipment better and make better use of it,” he says. “Because we don’t use the equipment every day, we forget some things and the classes are good refreshers.”

Mulock looks forward to cloud-based data that will make it easier to switch to equipment making the next field pass.

“Having the A-B line information in the cloud will eliminate using a stick drive to move data from one tractor to the next,” he says. “It will also make it easier to share data between farmers and consultants.”

Although the RTK signal they rely on is accurate, the Mulocks struggle with keeping the strip-till rig with shanks from drifting on hills.

“It’s important to maintain position because we plant the corn and soybeans in 8 inch, twin rows on 30 inch centers,” Mulock says. “It was impossible with the articulated tractor because the strip-till rig’s draft caused the controller to overcorrect and we were getting S-turning.

“Our dealer worked with us on this, and found out that we couldn’t use the auto-steering system with this rig. We can’t get the level of accuracy we want, but we can do it with a straight tractor pulling the modified rig with the oversized coulters,” he says. “We tried adding an iGuide receiver on the fertilizer bar, but that only made the S-turning worse.”

One option they are considering for the coming year is adding a steerable hitch to accommodate equipment draft on sidehills.