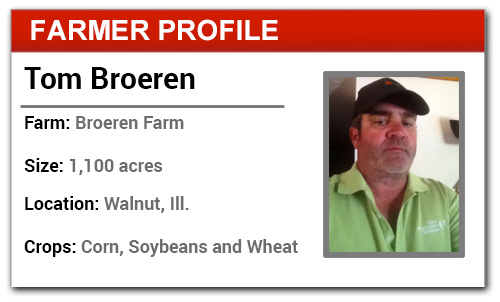 Tom Broeren readily admits he’s a coward when confronting residue on corn fields going back to corn on his 1,100 acres near Walnut, Ill.

Broeren, who is also a crop protection specialist for Crop Protection Services, relies on an RTK signal to help him, but realizes there is room for improvement.

He began strip tilling 4 year ago, and at that time, started using a John Deere GreenStar 2630 display and an RTK signal to achieve near sub-inch accuracy for his fall fertilizer application program with his 12-row Kuhn Krause Gladiator strip-till rig, planting and sidedressing anhydrous ammonia passes.

In the fall, he seeds cereal rye as a cover crop with a low level of lime using a spinner spreader. Before winter, he uses the strip-till rig with a Montag dry fertilizer cart to apply straight rates of potassium and phosphorous.

However, in 2015 he plans to use a Great Plains drill following harvest to plant the cover crop.

He says the controllers work well with the  display, in large part because of technical support from his Deere dealer. “We have been fortunate to get such good support locally, and when we were having trouble with the RTK signal accuracy, the technical help over the phone was responsive and helpful,” he says.

While Broeren reports he has had good success with his precision farming system, he also sees a need for some improvements. He’s also found some workarounds that help improve accuracy.

“Instead of establishing A-B lines based on fencerows or field edges, I set true east-west or north-south rows and deal with the point rows,” he says. “This makes it much easier to reestablish lines for custom applicators or if the controller would go down and would have to be replaced.”

Broeren has also found it helps to go in the same direction with every field pass. He has found the equipment will drift a certain way with each pass, which can make the implement be off by as much as 4 inches even though the tractor is spot-on.

“I wish the 2630 would indicate direction of travel like the 20/20 unit does. It would help us stay between the old corn rows and better manage trash,” he says. “It would also be helpful if the strip-till unit and the planter had staggered row units so trash could flow through more easily.”

Broeren also has challenges with his RTK signal strength at times, which can affect the accuracy of strip-tilling and planting passes.

“Ninety percent of the time it is good, but that 10% of the time when the signal is a bit off, it makes staying out of the residue from the last year very challenging,” he says.