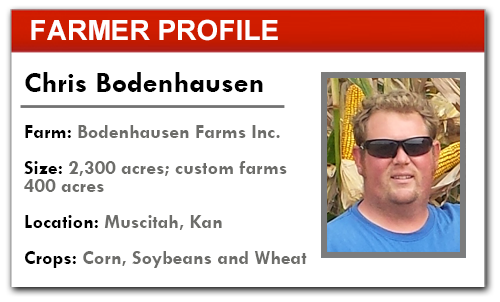 While Chris Bodenhausen has had few issues adopting precision farming practices, he’s still skeptical of some of the assumptions that spoon-feeding higher fertility levels will pencil out, especially with lower crop prices.

Bodenhausen farms 2,300 acres near Muscotah, Kan., and also does custom field work for other farmers in northeastern Kansas. He’s a proponent of banding fertilizer and will deep rip compacted soils as well as grain cart paths in the fall.

“The amount of tillage depends on the field and the grain cart traffic on it,” he says.

In the fall, he aims to make one pass with the Great Plains TurboMax vertical-tillage tool over corn ground and then prescription-applies dry phosphorous and potash over the top. In the spring, all ground gets one pass with the vertical tillage rig; corn ground will also get variable-rate liquid phosphorous and potassium, sulfur and zinc applied with the anhydrous ammonia pass.

He will also variable-rate apply anhydrous ammonia before planting corn with his John Deere 7790 twin-row planter that allows for variable-rate seeding.

Nearly all of his equipment is Deere and he uses a StarFire 2 signal that provides intermediate positioning control. “I’d like to plant right into the band of fertility, but the signal just isn’t exact enough, especially on terraced fields,” Bodenhausen says. “About 95% of our ground can’t be planted into the fertilizer band because the signal isn’t accurate enough.

“I have considered using an RTK signal, but others in the area have tried it and they have been dissatisfied with it. They have even tried a SF RTK system with a correction unit on the planter and the planter still slid out of the zone. It seems to work well on bottom ground, but not all land is bottom ground. It’s hard to justify that investment if you can’t get the precise placement,” he says. ”

Bodenhausen took second place in 2014 in the Kansas Corn Yield Contest with just over 337 bushels per acre on irrigated ground and is hoping to push yields higher with better precision management techniques.

“As we add more pivots, I would like the Apex farm management software to allow me to separate yield data on irrigated ground vs. the dryland corners of the field,” he says. “I would also like to see the prescription rate program easier to use. Right now, I have to work closely with my agronomist. I wish it was more user friendly so that you don’t have to be a rocket scientist to use it.”

Bodenhausen says they are into the farm’s seventh year of collecting yield data, and are coming into their second rotation of gathering soil tests since they began adjusting fertility levels with variable-rate fertilizer application.

“The agronomist I work with advocates bringing up the fertility levels on poorer soils, but I am not convinced that fertility is the limiting factor on those poorer soils,” Bodenhausen says. “I’m thinking that pushing the better soils harder and backing off fertility on the poorer soils would make more sense. I think our data in the next 2 years will give us more insight on that.”