By Clair Urbain posted on August 12, 2015 | Posted in Equipment Compatibility 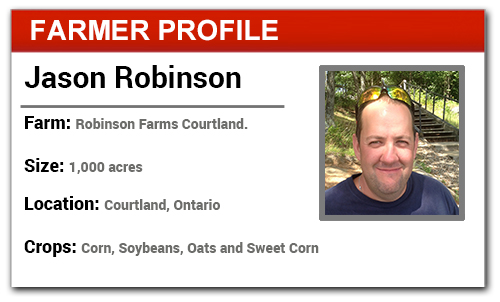 Jason Robinson walks both sides of the road when it comes to precision farming. He farms 1,100 acres of corn, soybeans, oats and sweet corn with his father, George, near Courtland, Ont. He also works as a local precision technician for Ag Leader.

The Robinsons started incorporating precision farming technology into their operation with yield monitoring in 2006. From there, they built management zones for soil testing and eventually moved into variable-rate application of lime, fertilizer and variable-rate seeding.

“We have highly variable soils here and it’s not uncommon for us to have 20 or 30 management zones in a 50-acre field,” Robinson says.

They use Ag Leader Integra monitors in their combine, TerraGator, sprayer and tillage/planting tractor. “The monitors control everything based on the maps I produce in SMS,” Robinson says.

They use a 12-row Sunflower shank strip-till unit for their spring tillage pass before planting. The monitor controls steering and variable-rate applies potash, phosphorous, magnesium and 28% nitrogen.

“We plant with a 16-row White 8516 planter equipped with hydraulic row-control drives and Ag Leader Advanced Seed Tube monitoring system for varying population,” Robinson says. “It also applies a straight rate of liquid 10-34-0 and 28% in a 2-inch by 2-inch band from the row.”

The Robinsons rely on an RTK signal with cellular correction, which allows them to strip-till with a 12-row unit and plant with a 16-row unit, without sacrificing accuracy.

While the cellular correction signal is accurate, Robinson says they are looking into purchasing their own base station. “It’s going to take more research, but with the subscription fees for the cellular service, I think we can cover the cost of a base station in 5 years,” he says.

In 2015, the Robinsons equipped their sprayer with Y-drop nozzles and OptRx sensors to apply 28% N.

“We are doing trials comparing full rate, variable-rate based on the sensor readings and a full-plus rate,” Robinson says. “We didn’t use less N, but I think we put it on where it was needed by the crop.”

When Robinson is wearing his Ag Leader hat, he often gets involved with helping farmers overcome struggles with retrofitting equipment.

“The retrofit kits usually are very simple, but don’t have all the parts needed for some equipment, so we need to make modifications,” he says. “Farmers are hesitant to adapt the kits to fit their equipment because of their lack of knowledge of whether the kits will work.”

Robinson had one instance where a farmer had to borrow a neighbor’s tractor because the fertilizer applicator didn’t match the most recent ISOBUS requirements. “Compatibility standards have come a long way, but they are still not where they need to be,” he says.

As for his own farming operation, Robinson gets frustrated with himself, putting off developing field maps in the SMS software until just before going to the field.

“I can’t be developing maps an hour before I plan to get in the field,” he says. “The SMS software is easier to use than most field management programs, but I must first find the time to do it.”