With a commitment to precision fertilization practices comes an expectation of financial savings and stellar tech support for Kansas operation Kramer Seed Farms.

Ben McClure was a recent ag economics graduate from Kansas State University when he went to work for Kramer Seed Farms in southwestern Kansas near Hugoton in 2003. His arrival came just as the multigenerational family farm was about to embark on a series of changes that has radically altered its farming operation, and significantly boosted its financial well-being.

The farm had been grid sampled in 1998 and at the time of the switch to strip-till, McClure says the operation was moving into zone sampling and investing in more precise nutrient monitoring. What he didn’t realize at that time, was the move to strip-till had set the farm up for an even steeper climb up the economic-efficiency ladder through then-emerging fertilizer technology.

Today, a managing partner in the 3,500-acre cash-rent, predominately irrigated operation, McClure says a typical year’s production includes about two-thirds of the acreage in corn with some cotton, grain sorghum or sunflowers included, and about one third of the land in winter wheat planted behind corn.

Over the past 15 years, the operation has invested heavily in precision farming technology, moving from intensive conventional tillage in 2005 to strip-till with auto-steer. At roughly the same time, farm managers were adopting variable-rate fertilizer technology and variable-rate seeding.

After 4 nitrogen treatments were repeated on three separate areas of Kramer Seed Farms, manager Ben McClure says use of an Exactrix system proved to be the most economical with a savings of up to $67 per acre of N.

McClure recalls the steep learning curve that accompanied the changes.

“We first started with a Raven Viper system for liquid fertilizer application, and when we moved to the Exactrix application system we were using Tee-Jet technology,” he explains. “The biggest problem at that time was finding local support to interface different precision ag systems and suppliers for what we were doing.”

In 2005 they operation purchased a 30-foot DMI 2510 strip-till rig equipped with coulters, shanks and closing disks followed by a berm builder on the back. They ran that rig and moved to all liquid fertilizer for several years, and realized significant saving in fuel and labor expenses.

Prior to adopting auto-steer and variable-rate fertilizing, McClure says operators were accustomed to following a marker and turning a dial on the applicator. Within 2 years, they went from “riding a horse and buggy to landing on the moon,” which was a big challenge for McClure and his employees, but they made it work, he says.

Perhaps the biggest change came in 2010, when Kramer Seeds Farms invested in the Exactrix fertilizer application system, seeking improvements in fertilizer placement and efficiency. The system includes a high-pressure (300 psi) anhydrous ammonia injector that delivers NH3 to the ground as a liquid.

It also features a formulator which injects liquid P (potassium thiosulfate) and liquid sulfur (ammonium thiosulfate) simultaneously with the NH3. The “collision” of the 3 formulations causes a distinctive chemical reaction and crystalline formation of TAPPS (triammonium polyphosphate sulfate). Exactrix founder Guy Swanson says the TAPPS concept provides a stable form of the three nutrients directly below the crop for improved nutrient uptake and crop performance. 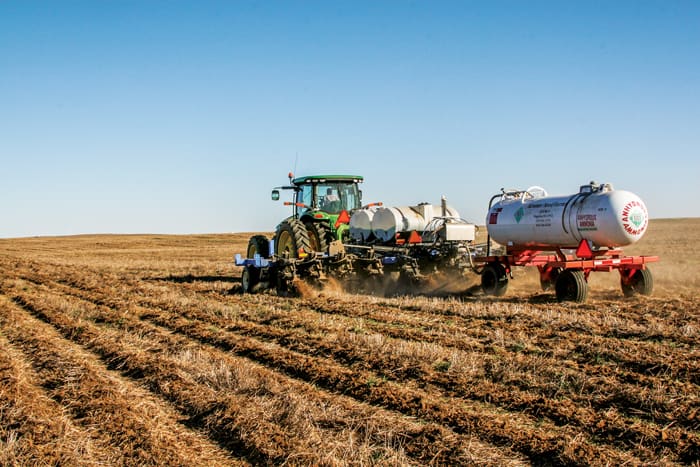 “Our John Deere dealer (American Implement) has been great supporting us, despite the learning curve required,” McClure says. “Their technicians are trained on Deere rate controllers and planters, so when we asked them to make that equipment communicate with the Exactrix system, it was tough.”

They added a 30-foot, 15-inch coulter bar to their DMI strip-tiller and equipped it with a modified mole knife from Shield Ag which allows the dual-injection of potassium and sulfur, McClure says. The anhydrous injection nozzle is mounted adjacent to the mole knife.

“All of that is now operated by our Deere controller and 2630 display since we consolidated everything three years ago and removed lots of clutter from the cab,” he says. 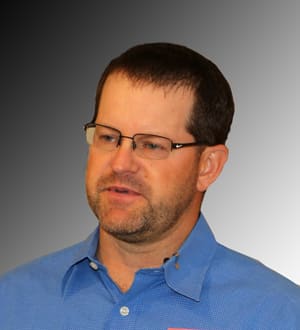 “The equipment we’re using now is much more intuitive and easier to use,” he says, citing programming changes 3 years ago from Exactrix that allows his Deere controller and display to integrate all of his precision functions through one system.

Since adopting the Exactrix system, McClure has tested and retested the it against 3 other nutrient management recipes and, even with drastically reduced N application rates, he has seen no drop in corn yields.

Tests show the system allows N recommendations from 0.6-0.8 of conventional soil lab rates based on application timing. Strip-tilled corn yields average 220 bushels per-acre and can jump to 250 in “good-weather” years.

But McClure says the money-maker today comes from the fact he and his crew are saving about $30-$70 per-acre on nitrogen (N) and phosphorus (P) with the efficiency found in their Exactrix fertilizer system. 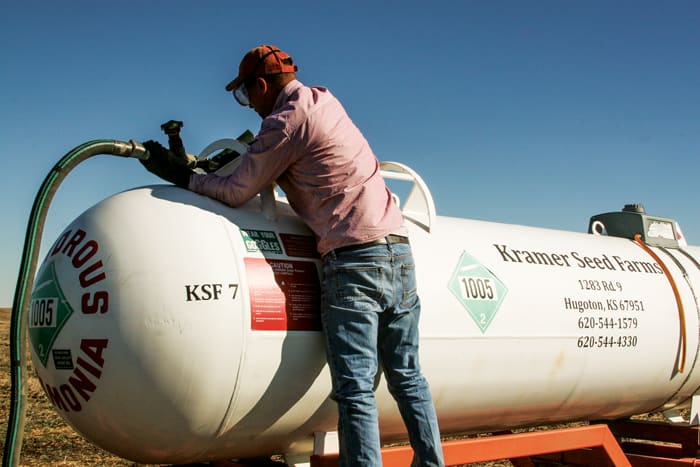 Anhydrous ammonia is the primary nitrogen (N) source at Kramer Seed Farms. As the least expensive form of N available, it is a primary ingredient in the application strategy which can provide ample N for crops at significantly lower rates than traditional lab analysis recommendations. (Photo Courtesy of Exactrix Global Systems)

After 4 nitrogen treatments were repeated on three separate areas of Kramer Seed Farms, manager Ben McClure says the economics of total operating expenses per acre of corn production were as follows:

An ag economist at heart, McClure says even with the lower return of $27 per-acre on 2,500 acres of corn production, the savings amount to what a producer would spend for the least expensive Exactrix system. “The second year, you can keep that bonus,” he explains.

Currently, McClure says Kramer Seed Farm is producing high-yield corn on about 140-148 pounds of N per-acre applied with the system. The same 15-inch coulter system is used to sidedress wheat in the snow and to fertilize sunflower stands in the spring.

“I know strip-till has saved us a lot of time and fuel on the tractors, but the real economic boost came from the way we operate today and the fertilizer savings we’re realizing,” he says. “I try to budget 12% of our gross operating expenses on fertility, and talking with various bankers in our area I understand other growers are spending 20-25% for fertilizer.

“When I can take the fertilizer budget and cut it in half, that’s a lot of money. I don’t know how we could have stayed in business without it.”

McClure acknowledges they’ve had to do some temporary troubleshooting with the Exactrix system, and problem-solving has been a team effort.

“We’ve had breakdowns between the Exactrix engines and the controller, and with what little diagnostics I can do, I could tell the fertilizer system was working right,” he says. “Meanwhile, our dealer technicians were going through their side of the equipment and said the controller was working correctly. Working together, we found an issue with the wiring harness that connects the two.”

“When I can take the fertilizer budget and cut it in half, that’s a lot of money…”

In another case this year, McClure says Deere technicians helped him isolate a malfunctioning flow meter on the Exactrix system by tracing circuits to ensure the unit was receiving the proper voltage.

With most of the compatibility issues resolved on McClure’s equipment, he says one of the biggest “pain points” he faces with his use of precision equipment today is maintaining continuity with crop scouts and advisors.

“Just getting started with precision ag was frustrating, and collecting soil samples and paying for the lab analysis is very expensive,” he says. “But finding agronomic scouts who will work with us on our program the way we want to do it is a real problem. About the time we get someone who knows us and our methods, they move on, or their territory gets changed, leaving us to train someone new.”

McClure says young crop consultants arrive well-trained in entomology and agronomy, but they have little understanding of the precision ag component as it applies to operations like theirs.

“When we throw the Exactrix system into the equation, the standard soil sample analysis they’ve been trained on goes out the window,” he explains. “They come in with a recommendation for 300 pounds of N and 65 pounds of P, and I tell them to cut it in half because that’s what we’ve been doing for 8-10 years and it’s what we’re going to do. It’s so different from what they’ve been trained, it just blows their mind.”

McClure says he’s been fortunate to have many long-time employees who buy into the farm’s philosophy, but says occasionally, new hires come in and have problems understanding “standard operating procedures.”

“I just tell them others may be farming different, but come harvest time, we’re hauling off more bushels than they are, and we’re doing it cheaper,” he says.

Dan Crummett has more than 30 years in regional and national agricultural journalism including editing state farm magazines, web-based machinery reporting and has an interest in no-till and conservation tillage. He holds B.S. and M.S. degrees from Oklahoma State Univ.

Reflecting on 7 Years of Ag Tech Evolution: From Hardware to Hands-On Training