The Precision Farming Dealer 2020 Benchmark Study showed several shifts in dealers’ expectations for their future revenue. Topping the list of revenue sources considered important for growth was application technology hardware, reversing its 3-year downward trend. Just over half of survey respondents considered this an essential source of revenue growth in the next 3 years, compared to 33.9% feeling the same in the 2019 study, when it came in seventh.

Dealer opinions showed, however, that moving precision hardware is on their radar as a significant challenge going into next year. Manufacturers integrating their own precision hardware into equipment came up more than once as a hurdle precision departments are facing.

“As a separate department, being able to sell an alternate precision product is difficult with OEMs having more integrated systems,” says one surveyed dealer. “This makes it harder to be a profitable department.”

Another dealer mentioned that high costs are becoming a problem in getting some customers to consider the benefits of precision hardware, regardless of size.

“High cost of precision farming prevents medium-sized farms from using it,” the dealer says. “Even larger farms are just trading dollars; the increased revenue ends up being just enough to cover the additional expenses of the hardware, software, subscriptions and service.”

Signal subscriptions jumped up to fourth in this year’s study from coming in at sixth in 2019. This came along with a moderate increase in dealers considering it an important part of revenue growth: from 34.4% in 2019 to 48.1% in 2020.

Farm data management was displaced from the top slot in the 2020 survey, dropping to sixth place. Around one-third of dealer respondents (35.2%) considered it an essential revenue source in the next 3 years, down from 52.4% in the 2019 study and 51% in the 2018 study. 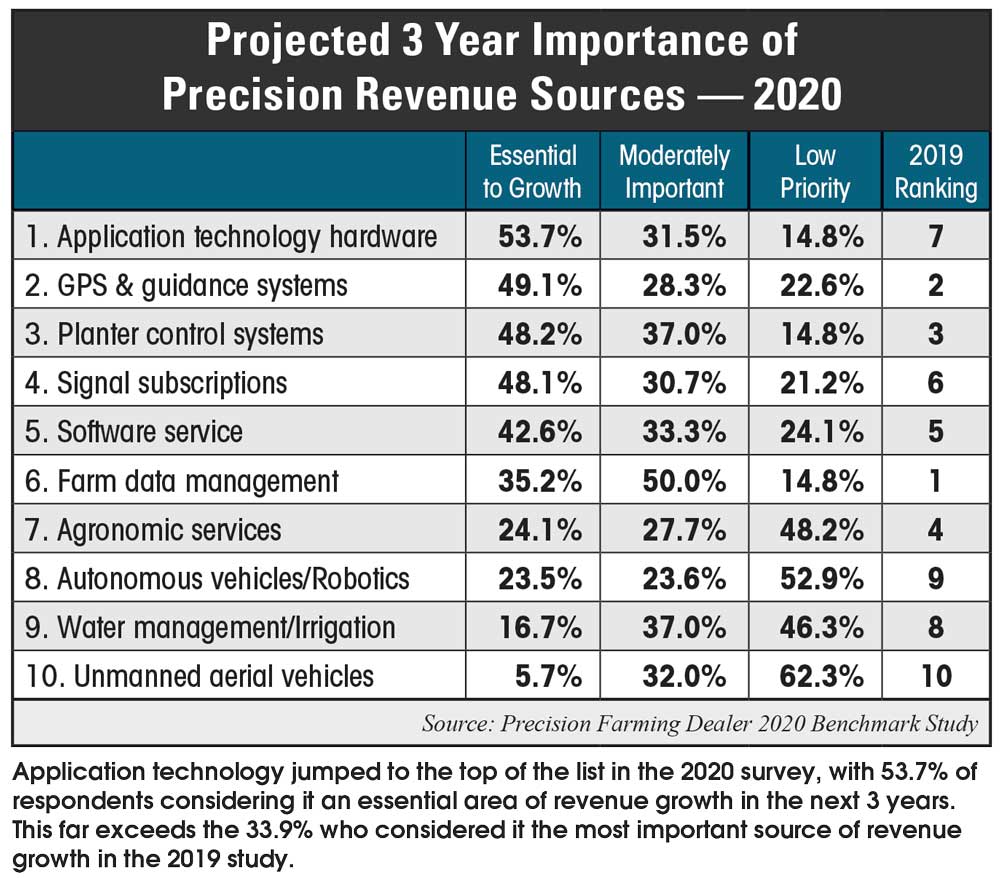 GPS and guidance systems retained its second place slot at 49.1% of respondents considering it essential for revenue growth, up slightly from 44.1% taking the same position in last year’s study. Planter control systems had a similar experience, holding the third-place spot with 48.2% considering it essential, up from 42.9% in 2019.

Customer training came in as the second most essential area of investment for dealers at 57.4%, up from third in 2019 with 50% considering it the most important investment. In their comments, dealers voiced a need to demonstrate the benefit of increased efficiency and productivity that precision hardware can bring. One dealer specifically mentioned working to getting “the ‘old ways’ of the ‘old guys’ used to precision offerings.” 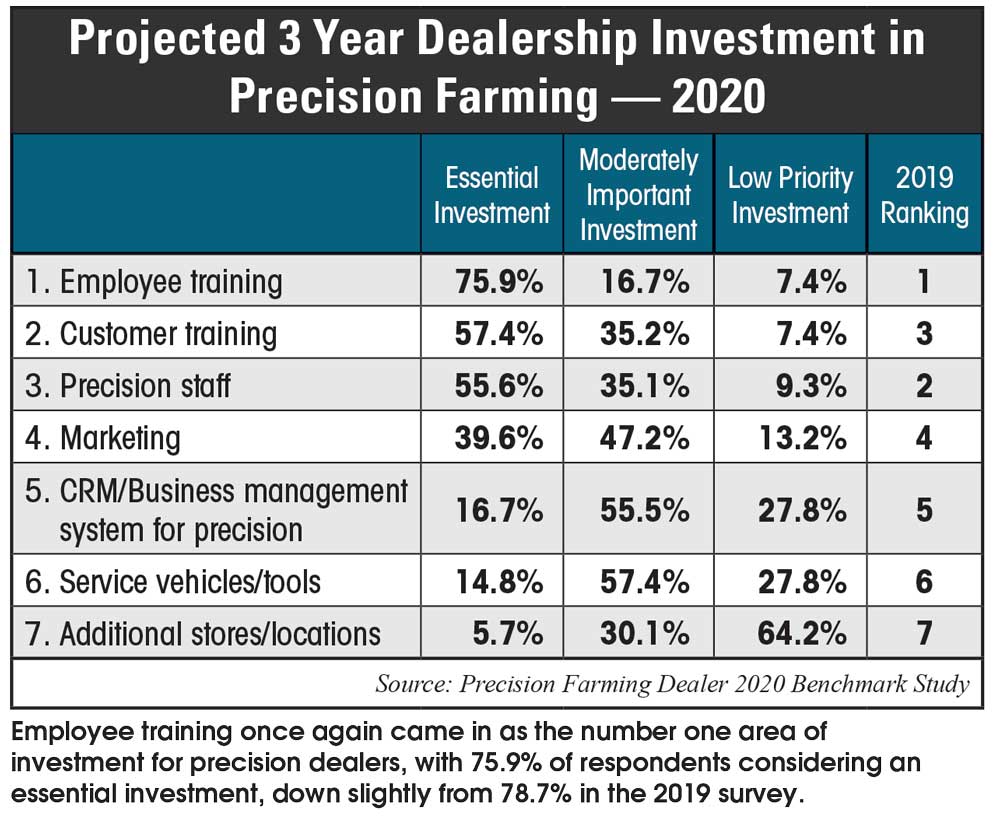 Investing in precision staff dropped from second place in 2019 with 63.3% considering it the most important to third place in 2020 at 55.6%.

The other four categories retained their 2019 rankings, but with some changes in the percentage of dealers that considered the most important/essential to future investment. The percentage of precision dealers selecting marketing as an essential investment dropped slightly from 41.4% in 2019 to 39.6% in 2020. Those indicating that CRM/business management was an essential investment, however, was cut in half from 32.8% last year to 16.7%. Service vehicles/tools and additional stores saw similar declines. Overall, most categories saw an increase in dealers considering them a low priority future investment.

Looking for Growth in Training, Billing

Precision dealers once again indicated their greatest growth need in the dealership was specialist training, unchanged from the 2019 and 2018 surveys. The percentage of dealers saying specialist training was their highest priority was 64.8%, a drop from 72.7% in 2019 and 71.2% in 2018. Customer training also maintained its second place slot, though the percentage of dealers calling it their highest priority dropped from 51.6% last year to 48.2%.

Though billing for precision service remained in third place in this year’s survey results, a greater percentage of dealers saw it as a key growth area, up to 46.3% in the 2020 survey from 43.7% in 2019. Dealers confirmed this need for billing in their comments; one dealer mentioned they plan to start charging their customers for phone support by providing the first year free, before billing in 2021.

The only ranking change from the 2019 survey was between adding additional staff and farm data management, which swapped for fourth and fifth place, respectively. One-third (33.4%) of dealers in 2020 survey indicated adding additional staff was their highest growth priority, compared to 38.3% in the 2019 survey. Farm data management had 26.4% of dealers considering it a high priority, down from 40.5% in 2019.

One dealer mentioned one step they had taken to combat the need for additional staff is in the form of a high school mentorship program.

“We are seeing a real problem with attracting new precision technicians,” they say. “We have begun exploring a mentoring program with the local high school to recruit younger technicians before they even make it to the trade schools. The idea is to get them locked down and working with us before they graduate high school.”

Adding new product lines/expanding new ones entered as the lowest overall priority for precision dealers, unchanged from last year. Additionally, the percentage of dealers considering it the most important growth area decreased, from 32.3% last year to 25.9% in 2020.

When asked to name a product/service they planned to add to their dealership in the coming year, over one-third of respondents (36.7%) said they weren’t adding new products or were unsure. At least two of these dealers mentioned a need for their department to gain more experience with the products they already carry.