By Jack Zemlicka posted on June 29, 2015 | Posted in Data Management

While many farmers collect field data, one of the ongoing challenges is knowing what to do with it. This is something Dan Sanderson, his son, Trent and their family have made priority to improve management of their 2,000-acre corn, soybean and wheat operation near Clare, Ill.

Trent has taken the lead on crunching and analyzing the numbers to assess return on investment and shape annual input expenditures. Before they even get into the field, he calibrates all of their equipment, including the yield monitor, to ensure accurate and useful collection of data.

“We choose to calibrate our equipment a few times each season, or at least check it’s accuracy,” he says. “It’s probably overkill from a lot of people’s standpoint, but if we’ve got the equipment to do it, I’d prefer to take the time to do it and have confidence in decisions we make based on that data.”

The Sandersons work with E4 Crop Intelligence, a precision ag consulting firm based in Woodbine, Iowa, on creating a summary report of input use on each field and how it correlates to yield.

“We look at what products worked and didn’t work, whether it’s chemicals, fertilizer or seed,” Trent says. “I can do a yield analysis based on certain applications.

“For example, if we did a droplet application of nitrogen and we got the perfect rain, we can drill down to evaluate the cost per acre and the profit.” 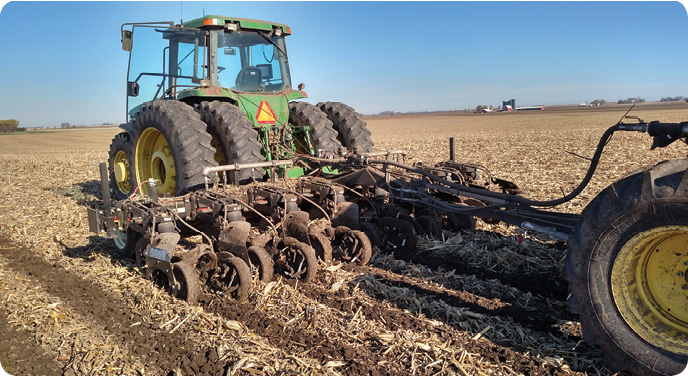 The Sandersons run an 8-row Dawn Pluribus strip-till unit and use John Deere’s StarFire RTK and AutoTrac systems for strip-tilling, planting and spraying and to move 15 inches off the row every year.

“If we’re doing a sidedress application of nitrogen, we can see where we sidedressed, on which date and determine whether it boosted yield,” he says. “Did it pay for that application or not, and should we change the timing to make it more worthwhile?”

At the end of the season, Trent compiles all of the invoices and expenses and presents the family with a summary report, which includes a breakdown of input costs and average yields for each field. As a group, they are then able to quickly identify whether a field was profitable or not.

The Sandersons also record each field’s scale tickets, crop moisture content and grain weight, which they incorporate into the annual reports. “It’s down to the bushel,” Trent says. “We can use that information to better manage our operation from a dollar and cents standpoint.”

Trent has developed a side business out of cleaning up field data for more accurate interpretation. “I’ve started with our operation and now offer the service to other farmers,” he says. “When we get the data clean enough, we’ll be able to do prescription fertilizer and seeding rates.”

But one of the challenges is making sure the data is useable. He cites four main sources of “dirty data.”

The Sandersons are savvy enough to manage the data produced on their farm and also analyze the return on investment of equipment and technology purchases for the operation. 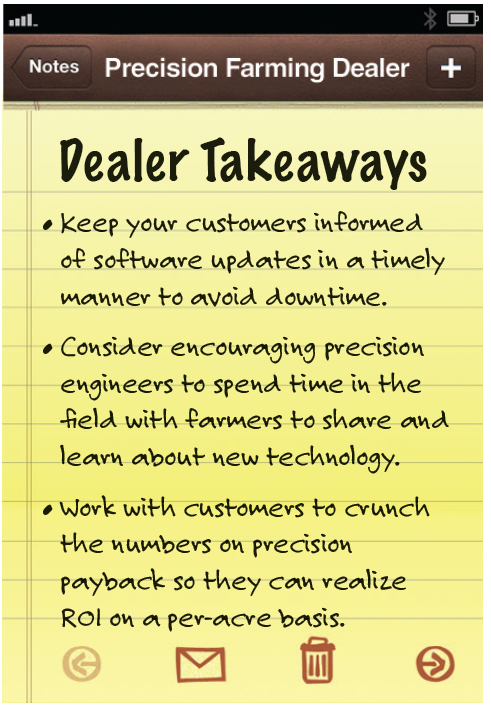 In 2007, they traded in their chisel plow for an 8-row Orthman 1tRIPr strip-till rig and started strip-tilling all of their corn, which required an investment in RTK-level GPS accuracy. The Sandersons also no-till soybeans and wheat.

They work closely with their local John Deere dealer, DeKalb Implement, and precision specialist Lindon Gord, when updating equipment and technology. They use John Deere’s StarFire RTK and AutoTrac systems for strip-tilling, planting and spraying, and to move 15 inches off the row every year.

“That was important to us, to be as far away from the corn-on-corn roots as possible and not to disturb that nutrient zone every year,” Trent says. “We need that repeatability in all of our farm field operations.

“RTK provided the opportunity for us not to be limited on equipment size. We could run a 12-row strip-till unit with our 16-row planter and eliminate an error with our guess row.”

The Sandersons are satisfied with the reliability of the RTK signal subscription they purchase from their farm equipment dealer. The 450 mHz that the signal offers suits their terrain well, which is scattered with tree lines and sloping acres.

“The signal seems to blow through trees and hills and we don’t lose it,” Trent says. “Plus, our controller won’t shut off auto-steering if the signal drops. It simply picks up the next best signal until the RTK signal reappears. We like that.”

This contributes to the confidence the Sandersons have to be able to strip-till in fall or spring, depending on field conditions, without having to sacrifice accuracy.

After running the Orthman strip-till rig for several seasons, they moved to a 12-row John Deere 2510S shank-style unit 4 years ago, but in 2015, purchased an 8-row Dawn Pluribus coulter machine.

Trent says they got to a point where it became hard to justify the annual operational costs of using their 530-horsepower John Deere 9630 tractor for strip-till. With the 12-row unit, they Sandersons typically could only strip-till about 6 mph, in part because they were using a mole knife to fracture soil 5-7 inches deep.

Trent hopes to increase that speed to closer to 10 mph pulling the 8-row unit with their 200-horsepower Deere 8300 tractor, and also experiment with precise fertilizer placement on either side of the berm.

“The per-horsepower cost for newer tractors these days is upward of $1,000,” he says. “We’re all about return on investment and that’s tougher to come by because horsepower is an issue with any shank-type strip-till setup we’ve used.

“For our operation, there’s no justification for spending $250,000 on a tractor. We’re more interested in paying for assets that are going to go up in value.” 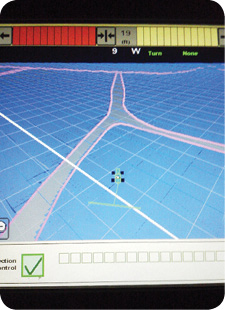 The Sandersons fastest return on their precision investment came with section control on their 16-row Case IH 1200 planter. They saved $5,500 in seeds costs in one 50-acre field using Ag Leader’s electric clutches on each row unit and monitor seeding with a Deere GreenStar2 rate controller.

Perennial payback with technology is important for the Sandersons and they’ve been able to achieve that with recent investments in application rate controllers and row clutches.

The fastest return on a precision investment came with section control on their 16-row Case IH 1200 planter. They use Ag Leader electric clutches on each row unit and monitor seeding with a Deere GreenStar2 rate controller.

“We farm a lot of point rows, so we find a lot of value with section control on all our applications,” Trent says. “The first year, I penciled out the return on a 50 acre, triangle-shaped field with one waterway and the worst angles you can imagine. Our seed costs were about $126 per acre for corn in that one, 50 acre field.

“We saved $5,500 in seeds costs alone that year. We paid for the cost of the row clutches in one field.”

Fertilizer application control has also paid off for the Sandersons. Section control on their sprayer allows them to more precisely monitor overlap or field boundaries to reduce application drift.

But controlling rates is also critical to reducing the bottom line impact of the Sanderson’s complex fertility program. They are experimenting with the timing of nitrogen applications to improve efficiency and productivity.

On a strip-tilled corn-on-corn field that produced 243 bushels per acre in 2013, they made five different nitrogen applications, which proved to be an expensive, but worthwhile investment. 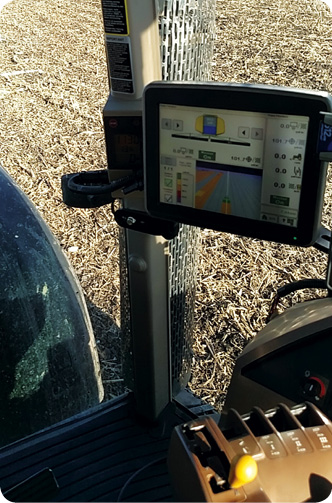 The Sandersons record and evaluate collected data to assess return on investment and shape annual input expenditures. Before they even get into the field, they calibrate all of their equipment, including the yield and planter monitors, to ensure accurate and useful collection of data.

“We spent a lot of money on nitrogen, about $165 per acre on that 120-acre field, but after costs, we ended up making $250 per acre,” Trent says. “We’re all liquid with our fertilizer, and section control is probably saving about $5 per acre because we have our 12-row fertilizer applicator split into 4 sections.

“That’s probably a little extreme, but we were anticipating maybe having all 16-row equipment in the future, so we set it up for the next common denominator of 4 and that would simplify the plumbing for us in the future.”

While the Sandersons are satisfied with precision service and support they receive from their dealer, Trent says there is always room for improvement. Specifically, when it comes to software updates.

He recently had a bad experience with their section control system making changes on its own — something which could have been avoided had the Sandersons been made aware of a software update sooner.

“A software upgrade created problems, and it wasn’t until we started asking questions that we found it was a known issue,” Trent says. “Dealers and companies can do a much better job of telling us about these problems and how to fix them. As producers, we’d like to know about technology updates as quickly as possible through an email or text.”

Something else Trent says could benefit both dealers and farmers is having precision technology engineers and software programmers spend some time in the field. These experiences could be good learning opportunities for both developers and end users.

“I suspect there is a disconnect between the engineers programming technology for agriculture and how it’s being used in different areas, because not every field is square and flat,” Trent says. “It would be nice to see programmers spend a week with producers while we’re operating this equipment, to be able to show them what we like, what we don’t like and give them ideas on how to improve products in the future.”