By Ian Gronau posted on July 8, 2015 | Posted in Equipment Compatibility

With bandwidth limits approaching and proprietary precision obstacles looming, project groups seek to get ahead of market curve.

It’s hard to have a conversation about farm equipment compatibility without mentioning the Agricultural Industry Electronics Foundation (AEF). Although the organization is still focused on broad efforts and ISOBUS conformance building, it recently began planning for the future of equipment interoperability.

The project team dedicated to wireless in-field communication will evaluate and select radio standards for machine-to-machine communication. This would include field position, speed and implement fill levels.

“We need to examine the correct communication methods for exchanging different types of data from one machine to another to establish a sort of protocol,” says Andrew Olliver, communications and marketing specialist with AEF. “Whether that’s position data, or if it’s saying what a specific piece of equipment is actually doing or even if it’s sending a control message, the guideline will have to be evolvable to fit multiple applications. We’ll have to decide on encryption and security too.”

Olliver also says it’s important to draw the distinction that the group is working on in-field communication between implements rather than standards addressing data transferred from implements for aggregation on a server. 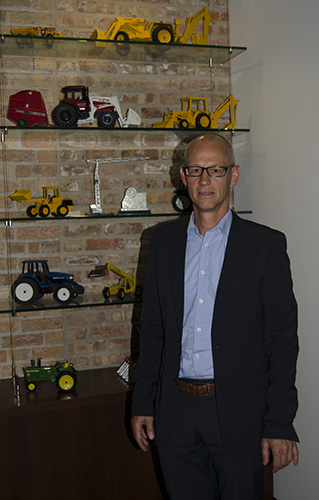 AEF chairman, Peter van der Vlugt, says that although the project team is still in early stages, time and developing technologies will be working against them.

“I’ve seen a trend over the last 2 years toward a lot of new technology coming into the industry, and in response the markets are basically demanding that the industry come up with some sort of standard quickly,” says van der Vlugt.

Although in-field communication is very different than ISOBUS, the market indicators are the same — end users prefer the option of mixing brands of implements, electronics, tractors and other components in their operations. Like ISOBUS, in-field communication standards will have to overcome proprietary boundaries.

“A comparison could be auto-steer control systems,” says van der Vlugt. “They’re all quite unique, but they are not currently interchangeable. For example, if you have one manufacturer’s auto-steer system and you’d like to share the A-B lines of that system with a different system, then you have a problem — and it’s one that the dealer can’t solve. This is what we’re trying to avoid by setting guidelines for in-field communication.”

Another forward-looking initiative the AEF is targeting is high-speed ISOBUS. A project group has been assigned the task to build a set of guidelines that manufacturers can adopt regarding higher bandwidth products so the end user will have cross-manufacturer compatibility. The need for these standards, van der Vlugt says, is already here.

“We suspect that we will run into bandwidth problems soon,” he says. “Some combinations of machines already go up to the current bandwidth level. Going forward, we’ll need the bandwidth to run multiple cameras and other sophisticated equipment.”

The project team has already decided that 100 Mbps (megabits per second) will be the preliminary speed standard, since the need for at least that much bandwidth will be unavoidable over the next decade.

While building new guidelines, van der Vlugt says that the project team will also consider both wired connections and wireless ones — which would provide an opportunity for them to merge their efforts with the wireless in-field communications project team.

“Wireless may be an option, but I think the general feeling is that we should look to wired connection because we have to have implements connected in any case,” says van der Vlugt.

Regardless of other developments, he says that one thing is for certain; the high-speed ISOBUS must be “backwards compatible.”

“If you plug in a device that is faster, the computer recognizes that and automatically switches,” says van der Vlugt. “We need to maintain the same level of compatibility no matter what piece of equipment the farmer is using.”