Day in the Cab: Maximizing a Diverse Skillset to Provide Comprehensive Service

By Jack Zemlicka posted on February 1, 2016 | Posted in Dealer Development, Service and Support

A passion for precision and a love of farming motivate Johnson Tractor’s Jason Pennycook to deliver personal, progressive service to customers.

The ability to relate to farm customers, understand their concerns, patiently solve their problems and even share in their frustrations are traits that define a successful precision farming dealer.

Riding along with Jason Pennycook, precision farming specialist with Johnson Tractor, for this installment of our Day in the Cab series, it didn’t take long to realize he embodies the qualities and character of someone born to work in agriculture.

“To do this job, you had better love farming or it will just drive you insane,” he says. “Luckily, I have a horrible addiction to farming.”

Jason started at Johnson Tractor’s Janesville, Wis., store in 2002 working in the service department, before transitioning full-time to precision farming in 2009. He is the senior specialist for the 4-store Case IH dealership group, which employs another full-time specialist at its Rochelle, Ill., store and part-time specialists at their locations in Juda, Wis., and Amboy, Ill.

With experience troubleshooting mechanical and electronic problems on farm equipment, Jason often leverages his diverse skillset to provide customers with comprehensive service. But his third tier of experience as a farmer keeps him grounded and in touch with customers’ needs, no matter how mundane. 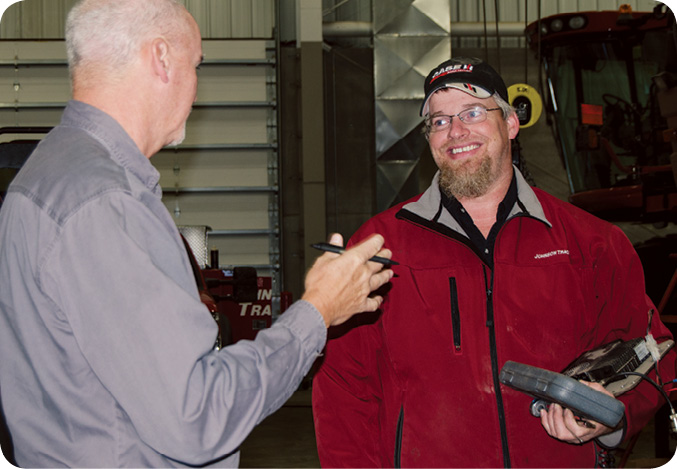 Pennycook spends most of his time working out of Johnson Tractor’s Janesville, Wis., store, and is a source of input for co-owner Leo Johnson (left) on what the dealership’s precision customers are looking for and need.

Jason farms about 160 acres and custom harvests and plants another 800-1,200 with his twin brother, Adam, who is a salesperson at Johnson Tractor’s Juda, Wis., location. Jason cuts an imposing figure accented by a wiry beard (peppered with a few more gray hairs since becoming a precision specialist), but it belies his conversational style with customers.

Despite winding down a whirlwind harvest, seldom was Jason without a smile during the course of our 10 hours and 180 miles together, whether solving a GPS mystery, scaling the side of a grain bin or anxiously downloading precious data from a yield monitor.

5:45 a.m. I slap my hand across my alarm clock, slide out of bed and head downstairs, consciously trying to make as little noise as possible. The silence is short lived when I step on a squeaking dog toy.

6:17 a.m. Two cups of coffee and another thermos full for the road and I’m out the door. I’ll rendezvous with our assistant editor Jaime Elftman at Johnson Tractor’s Janesville location, which is an easy 70-mile drive, but dense fog the entire way makes for a slower ride.

7:27 a.m. I arrive at the dealership, which is dramatically different than when I had last visited 2 years ago. The store recently completed an extensive remodel that included an expanded shop and new expo center. Jaime has already arrived and we head inside. It’s a quiet start to the day, but employees and a couple customers are starting to populate the showroom floor. 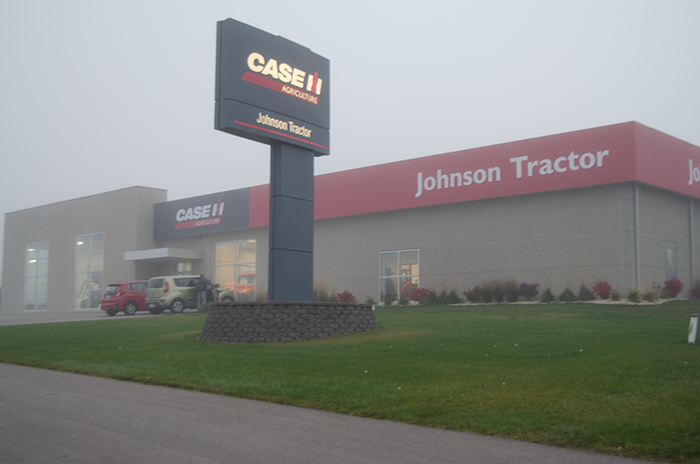 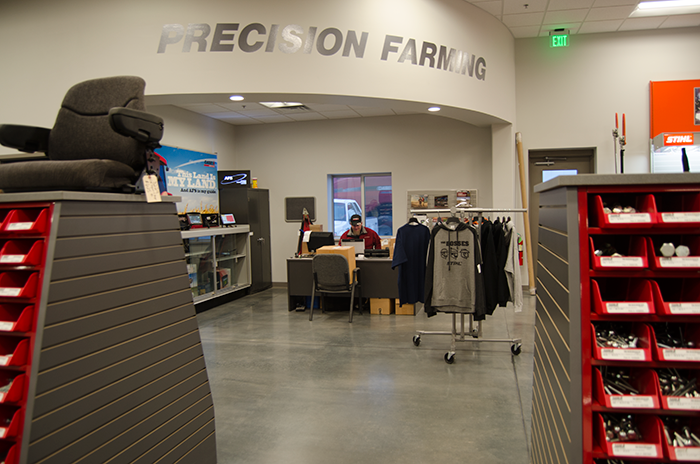 7:32 a.m. Jason greets us and we congregate near his work station, which is easy to find, even if he typically isn’t there this time of year. He jokes that having the words “Precision Farming” on the curved wall above his area lets everyone know that he’s not there. His desk is drowning in inventory and service projects — with a half-dozen boxes of different sizes covering every corner. One employee commenting on the clutter says, “It looks like fall.”

7:48 a.m. After checking a few emails and getting organized for the day, we head back to the parts department to pick up supplies needed for the day’s service calls, including a two-way radio from a customer’s traded-in tractor and new antenna for an RTK tower that had been struck by lightning.

In the service bay, we run into co-owner Leo Johnson who asks Jason and I for our opinion on whether it’s still constructive to order new planters equipped with row markers. While we agree that markers probably aren’t necessary for the precision-savvy operator, Jason says that it’s still probably an investment worth making. “I’d love to say we don’t have to do markers, but I can see the situation where there’s that one planter without them, and we’ll have someone interested who is running a different color tractor, and he doesn’t have RTK or any guidance at all who will want them.”

Spending several years in the shop at Johnson Tractor, precision specialist Jason Pennycook has a valuable blend of technical and mechanical skills. In this video, he explains how this complementary skillset helps build confidence with customers and add value to service calls.

8:05 a.m. Jason flips down the tailgate of his service truck and the inside is stocked with components. Mounted above the tire wells on each side are vertical shelves filled with socket wrench attachments. There is also a toolbox in the center of the truck bed, also packed with parts and tools. Jason admits that he travels with more miscellaneous stuff than the average precision specialist, a byproduct of his time working in the shop at Johnson Tractor. “Most of our precision guys have a small bag of tools, but I spent 5 years in the shop before transitioning full-time to precision,” he says. “A lot of my customers know that, so it’s best for me to have those additional tools because I can also fix a combine or planter.”

8:15 a.m. We’re en route to our first stop in Rochelle, Ill., about an hour away, to replace the antenna and power source on an RTK tower on Dave Breitweiser’s farm. Dave is one of 4 customers who own their own base station, and Johnson Tractor also operates its own RTK network out of the store in Amboy, Ill. Jason had been to the farm about 2 weeks ago to troubleshoot the problem, which he suspects was a lightning strike that disabled the repeater.

“Dave had about 800 acres left to harvest when the tower went down, and we were able to get his base station working again, but his repeater needed to be replaced, so he had to switch to WAAS,” Jason says.

In this video, Pennycock explains his process for diagnosing and fixing RTK issues, how these services are billed out and RTK adoption by the dealership’s customers.

8:40 a.m. Jason gets a call from Karl Faivre, the precision specialist at the dealership’s Rochelle store, who is going to meet us and assist with the antenna replacement. It’s the first time that Jason’s phone has rang all morning, which is unusual for this time of year. Normally, he gets 50-100 a day, starting at about 6 a.m. in the thick of harvest, but the foggy, damp start to the day is providing a respite.

We joke that the weather is appropriate a day ahead of Halloween, clearly one of Jason’s favorite holidays. He notes that he and his brothers used to wield chainsaws at a local haunted house. “It was more fun than you could possibly imagine,” he says. “I think I should still do that. It would be a great stress reliever this time of year.”

9:17 a.m. We arrive at Dave’s farm and Karl is waiting for us. He’s been with Johnson Tractor about 2 years, but makes it clear he won’t be the one doing the climbing this morning. “Jason is the daredevil, which is why he’s the person who always handles the tower maintenance and service,” Karl says.

Jason ties one end of twine to his belt and makes the 100-foot, open-air climb. Karl attaches a small bag of tools to the other end of twine and Jason hauls it up. The next step is to send the new antenna up, but the twine gets tangled on the way back down and Jason has to climb back down to reattach a new piece. It’s a minor hassle, but nevertheless adds a little more exertion for Jason.

9:48 a.m. With the new antenna in place, Jason and Karl check the repeater power and everything is up and running. The job will be billed out for the time it took Jason to troubleshoot the problem, and then the cost for replacement parts. “It’s not that bad of an expense, considering it’s the first issue that’s come up since we installed the system about 7 years ago,” Jason says. “Most customers have the base stations insured as part of their policy, so that will typically cover the cost of repairs.”

10:02 a.m. We’re about to part ways with Karl, but his service truck won’t start, so Jason gives him a jump. “With all the chargers and harnesses we have hooked up in our vehicles, this happens from time to time,” Jason says. He has an iPad mounted on the center console in his service truck and various other devices plugged into USB or charging ports on a regular basis, essentially giving him a mobile office.

Back to Winter 2016 Issue Contents Videos with Jason Pennycook

Day in the Cab: Planning a Day on the Road

Day in the Cab: A Supplemental Approach to Tracking Sales & Service

Day in the Cab: Upgrading GPS from a WAAS Signal to Trimble's RangePoint RTX