COVINGTON, La. — Greenleaf Technologies announced that six of its TurboDrop D Series nozzles have been approved for use with Monsanto’s XtendiMax herbicide with VaporGrip Technology. Three of these nozzles are also approved for application of Dow AgroSciences’ Enlist Duo herbicide. 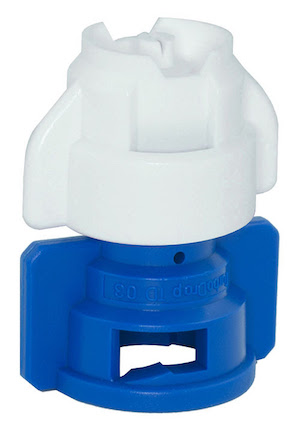 “The D Series of our TurboDrop nozzles were designed with dicamba, 2,4-D and glyphosate applications in mind,” noted Will Smart, President of Greenleaf Technologies. “These nozzles deliver ultra-coarse (UC) and extremely coarse (XC) spray droplets for maximum drift control over a wide operating range. The air-energized droplets provide better coverage than solid liquid droplets of similar size by increasing the number droplets in the spray, by accelerating the droplets into the crop canopy, and by improving the spreading dynamics of the droplets upon impact. Plus, the D Version of the TurboDrop DualFan can cover the target from two to four different angles to further enhance herbicide performance.”

Smart added that Greenleaf has the only DualFan nozzles approved for use with the XtendiMax with VaporGrip Technology.  “Ultra-coarse (UC) nozzles are great for drift control, but not so great for coverage,” he stated.  “Alternating our DualFan nozzles will help make up for the deficiencies of UC droplets. In addition, having the ability to switch-out the tips to deliver medium to coarse droplets for other applications makes our TurboDrop nozzles much more versatile than any other nozzle on the market today.”

According to Smart, Greenleaf Technologies’ standard TDXL and TADF nozzles can be converted easily and inexpensively to D Series simply by changing out the tips. To convert the TADF03 to a TDXL 11003-D, remove the DualCap and replace with it with a TipCap TCP 11008 (white) tip and a DIF4 diffuser. To convert the TADF03 to a TDAFO3-D, replace the two nozzle tips, with an SMP11003 in front and a SMP8005 in back.