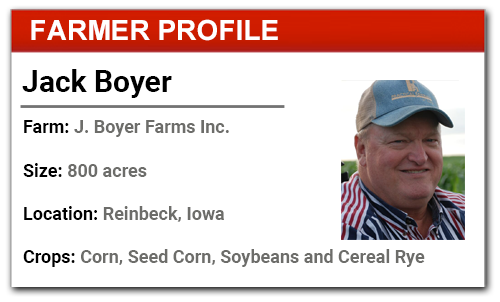 Jack Boyer has an engineering background, so he’s not afraid to roll up his sleeves and attack equipment problems that come his way.

He strip-tills almost all of his corn and no-till drills soybeans on his 800-acre operation near Reinbeck, Iowa. With consistent soil types across his fields, Boyer is finding that variable-rate nitrogen (N) isn’t as helpful as variable-rate phosphorous (P) and potassium (K) application.

He develops the prescriptions for fertilizer application using Ag Leader SMS software, then turns the rate information over to his local co-op for custom application.

Boyer also uses cover crops on 100% of his fields. “In corn, we’ll go in with a burndown application plus 30 pounds per acre of UAN before planting, but we’ll no-till soybeans right into the cereal rye that is almost 4 feet high, then come back with a burn-down within 5 days,” he says. “We find the soybeans can grow up though the rye, which also helps control the weeds.”

He seeds soybeans with a Deere 1560 no-till drill outfitted with heavier down pressure springs and Copperhead Ag Furrow Cruiser notched wheels to close the seeding slot.

“Because we are seeding into standing rye, we can’t use row markers, so the auto-steering on the GreenStar 2630 monitor does a good job,” Boyer says. “We will either use the RTK-equipped receiver if it’s not being used for strip-tilling and planting corn, otherwise we will use another SF3000 receiver using an StarFire1 signal.”

If he hires the co-op to strip-till in the fall, it will apply N, P and K. Otherwise, Boyer makes a pass in the spring with his 12-row Dawn Pluribus strip-till unit, applying only N after the P and K were custom prescription-applied.

His planter is a 12-row three-point hitch-mounted Deere 7300 with hydraulic drive, Precision Planting vSet seeding units, AirForce down pressure system and closing wheels made up of one Deere smooth wheel and one Furrow Cruiser notched closing wheel.

The planter is controlled by a Precision Planting 20/20 monitor, but steering for his 8000-series Deere tractors comes from the 2630 monitor getting a signal from a Deere StarFire 3000 receiver.

“Early on, we had GPS signal issues, but the StarFire 3000  receiver and RTK signal is more reliable than the older models were,” Boyer says.

To supplement his field maps, Boyer uses a drone to scout fields. “It’s much easier to identify problems from the air. They really stand out,” he says. “With the drone, I found that my vertical-fold planter wings were flexing and the seed wasn’t getting planted deep enough in those rows.”

Another time, Boyer was able to identify that an anhydrous knife was partially plugged, justifying the time and investment into the technology.

Although Boyer has been pleased with his precision equipment’s performance and reliability, there have been a few times where he needed some timely assistance in solving issues.

“One time, we had all rows on the planter that would erratically skip off. I spent a lot of time on it and so did the dealer’s technician. It finally got to the point I was talking directly to Precision Planting’s help desk and within 10 minutes, we identified a faulty hydraulic motor solenoid. We replaced it and it solved the problem.”

But a great challenge for Boyer has been the turnover he’s seen within his primary dealer’s precision department. Since his involvement with precision equipment, his dealer has replaced its technician at least 5 times, which has required patience and persistence on Boyer’s part to make sure he’s getting the support he wants.

“Technicians tend to move on,” he says. “I really liked the last one we had and I haven’t worked with his replacement yet. It seems that high technician turnover is common. It takes a while to develop a good working relationship with a new technician.”

You can learn more about Boyer's farming operation and technology adoption at the 5th annual National Strip-Tillage Conference in Iowa City, Iowa.