Measuring the Measurables of a Precision Business

By Jack Zemlicka posted on January 29, 2020 | Posted in Dealer Development, Service and Support

Nick Rust has an idea. Actually, he has a lot of them. But inspiration is an expectation for the longest tenured member of H&R Agri-Power’s precision farming team.

Rust joined the dealership full-time in 2010 as a precision farming specialist, after completing an 80-hour internship program coordinated through Hopkinsville Community College where he graduated with a 2-year ag tech degree.

“At the time, we were just a couple of guys with trucks, and we maybe sold $250,000 worth of hardware across the 6 stores we had back then,” he says. “Most of what we sold was aftermarket components, but we didn’t bill any of our time.”

It wasn’t until 2014 that Rust says H&R’s precision team formalized into a true department, when he helped develop the dealership’s financial metric to evaluate the bottom-line value of the precision side of the business. This includes tracking income though hardware sales and billed service hours for each specialist, along with expenses which include salaries, trucks, training and fuel. 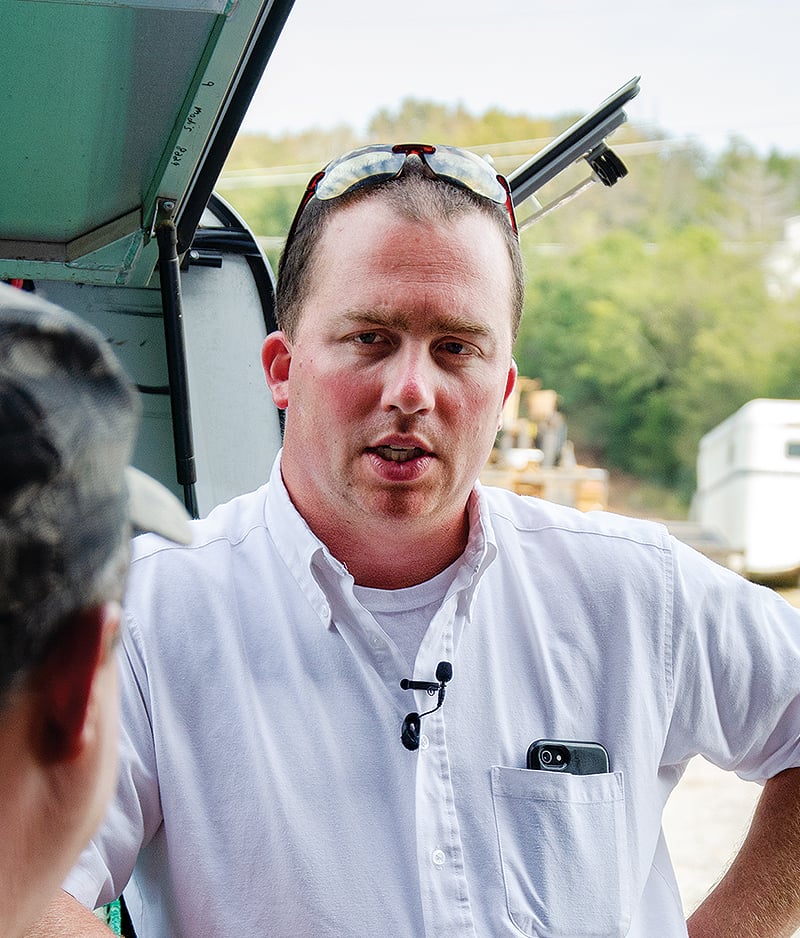 Engaging customers in conversations during the course of a service visit can uncover additional precision or machinery needs. In his conversation with customer Jason Newberry, Nick Rust learned about opportunities to add guidance systems to a second tractor and sprayer.

After graduating with a 2-year ag tech degree from Hopkinsville Community College, and completing an 80-hour internship program with H&R Agri-Power, Nick Rust joined the dealership as a full-time precision specialist in 2010. He was one of two specialists at the time for the then 6-store Case IH dealership.

H&R has since grown to 17 locations in Alabama, Illinois, Indiana, Kentucky and Tennessee, and in July 2019, Rust was promoted to the precision ag coordinator, overseeing training, budgeting and oversight of an 11-member precision department.

Role: “We’re in the sales business. My ultimate goal is to get all the precision ag specialists trained and on the same page. Communication is essential within the team, but also with other departments. My constant focus is on what I can do to make the precision team more efficient in their day-to-day and contributing positively to the bottom line of the company as fast as possible.”

“Gross contribution is a reasonable metric to evaluate the precision team,” Rust says. “This is a sales company and our specialists are in the business of selling.

“We can go off that financial sheet and decide whether the specialist is producing or not. It’s fair.”

Rust is accustomed to the daily challenges posed by a rapidly evolving precision business, and the professional scrutiny and pressure that comes with those challenges. Spending nearly a decade working within the same dealership’s precision department is an anomaly.

He acknowledges that recurring seasonal demands, combined with growth of the dealership to 17 locations and an 11-person precision team have tested his endurance. But a grounded, logical approach to problem-solving and deep-seeded work ethic have earned Rust a seat H&R’s leadership table.

In July 2019, he became the dealership’s precision ag coordinator, working out of the Hopkinsville, Ky., location and in charge of organization, training and oversight of the precision business. While Rust has local support from store managers, he wants to draw on his experience as a specialist to improve inter-department communication, collaboration and results.

“When you get to be a company of this size, there is the potential for a breakdown in communication,” he says. “Opening up those lines of communication is a hard part of the job, especially getting everybody on the same page outside of the precision department. I don’t have any problem with the specialists, they’re easy. It’s getting parts managers, store managers and wholegoods salespeople, all on the same page when it comes to precision.”

To improve communication and coordination between departments, Rust initiated a short-term program focused on early orders for Kinze and Case IH planters through the dealership, and aftermarket options to include Precision Planting components.

“The salespeople who learn to utilize our specialists will make more money in the long run, so I tried to come at it from the corporate angle,” Rust says. “Part of my brainchild was to come up with an H&R-specific program which gave wholegoods salespeople incentive for a lead that led to a sale.”

Even if customers weren’t interested in trading planters, they may be looking for a technology upgrade and Rust wanted to work with salespeople to acquire those leads.

“If the lead actually led to a sale of say a $60,000 system, then the salesperson got a $1,000 or $1,500 kickback for the lead,” Rust says. “I was hoping for a little over $200,000 in sales volume and we hit that goal. Only about 3 of our locations really push Precision Planting, so going forward, part of my job is getting the other 14 more involved and increasing engagement.”

Another area Rust wants to improve is precision inventory management. His role as coordinator requires oversight of components to ensure stocked parts don’t sit past their prime and become a liability.

“Precision ag parts tend to be more expensive so when they hit that obsolete status, they look a lot worse on the paper,” Rust says. “When we acquired one of our most recent stores, it had a lot of precision ag parts sitting in wholegoods accounts with tag numbers on them, which was a bit odd.

“I was able to get those components moved back into the parts system so a precision ag specialist out of any of our locations can type a part number in and find it. Before that, when we searched it, we didn’t know we had it.”

Rust says he uncovered more than $100,000 worth of parts inventory at the newly acquired store that was re-tagged and searchable within H&R’s inventory, rather than potentially becoming obsolete on the shelf.

“A lot of that inventory already had celebrated a birthday and we don’t like any precision parts to have a birthday,” he says.

With talented precision staff often in short supply, Rust wants to maintain stability within H&R’s team, which includes 5 specialists hired within a 6-month span in 2019. While he doesn’t directly hire specialists — that is left to the store managers — Rust sits in on interviews and has “veto power.”

He notes the key in successful development of precision hires at H&R Agri-Power is balancing realistic expectations with practical experience. Rust acknowledges it takes 2-3 years of developmental investment to get precision specialists to generate revenue for the dealership.

"If I’m not constantly training and putting my experience to work, ultimately, we’re not making more money. Turnover is expensive and we can’t afford to be constantly starting over..." – Nick Rust

“Within 6 months, they’re billing some time, they’re selling some product and interacting with customers,” Rust says. “If they’re in a mentoring situation with an experienced member of the team, they will be productive enough to break even that first year.”

Even though more of Rust’s time is dedicated to administrative responsibilities, he holds himself accountable to get in the field at least twice per month with the more inexperienced precision specialists at the dealership.

The motive is two-fold. Rust wants to be a visible mentor, accessible to the precision team and not just a voice on the end of a phone or providing precision answers in an email. He also doesn’t want to get out of touch troubleshooting technology and has a management responsibility to keep current on on-farm problem-solving. The end goal is keeping talent.

“We have semi-annual meetings with the whole precision team, but to really understand and help our specialists, I need to do what they do,” Rust says. “I want retention. I want to keep people. If I’m not constantly training and putting my experience to work, ultimately, we’re not making more money. Turnover is expensive and we can’t afford to be constantly starting over.”

To that end, Rust is researching ways to minimize the risk of employee burnout, drawing on his own experience of being on the brink early in his career and also asking questions of his team about their comfort level and concerns.

“Part of what made me successful and not burn out, is I learned how to keep the job at work and not bring it home,” he says. “Inevitably, the problems I can’t fix, that I work on it all day, still keep me up at night. But I enjoy saving farmers money, making them more efficient and seeing the smile on their face when I come out there and can be the hero. That’s an awesome feeling.”

Writing the Book on Precision SOP

Improving internal efficiency is one Nick Rust’s goals as precision ag coordinator at H&R Agri-Power. With 9 years of experience as a precision farming specialist, he spent countless hours negotiating with other departments on billing practices and sales allocation.

“Putting out fires at the corporate level” is one way Rust explains his current role, but he is working to streamline operational procedures, especially with it comes to the precision farming department.

The catalyst came after H&R’s accounting department was sorting through invoices for more than 4 dozen signal subscription invoices absorbed with the acquisition of a recent store. The way they were initially processed, all the charges were assigned to a general account and which didn’t allow for tracking the margin.

“The precision department didn’t get credit for the sales because it was classified as a miscellaneous shop charge,” Rust explains. “We had to redo something like 55 tickets which was about $60,000. Turns out we didn’t have a standard operating procedure for how to do these correctly, so I decided to write one.”

Rust distributed the document to the precision team and it’s been a helpful reference tool in proactively answering billing questions before they are asked. The initial success inspired Rust to dig deeper into H&R’s SOP in other areas and he’s begun drafting revised or brand new procedures.

“One of my projects that I’m planning on working on is a precision ag manual or precision ag specialist’s handbook,” Rust says. “It’s going to be a series of SOPs that I can put in the hands of new specialists. It’s time-consuming, but in the end, it’s necessary, especially for a 17-store company.

“We will inevitably have turnover and having our processes documented will ease that transition and training when new hires come on board.”

[Podcast] Measuring the Success of a Standalone Precision Business

Manage the Minutia of a Precision Business to Achieve Measurable Growth