By Clair Urbain posted on November 30, 2016 | Posted in Precision Agriculture 101 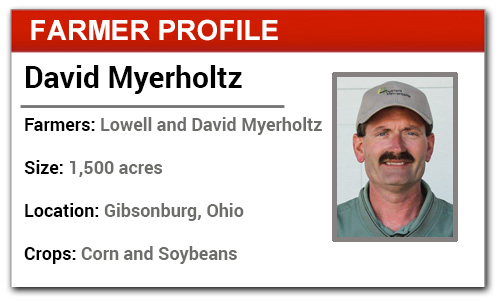 Farmers in the Lake Erie watershed area in northwest Ohio are extremely aware of the public’s interest in water quality and agriculture’s role in protecting it. David Myerholtz says precision farming practices help him and his father, Lowell, fine tune and document their efforts to protect the water quality in Lake Erie. Technology also helps them use crop inputs more efficiently.

Farming 1,500 acres near Gibsonburg, Ohio, they strip-till corn and no-till soybeans. “The strip-till pass in the fall establishes the seedbed for the following crop of corn and we also variable-rate apply phosphorus (P) and potassium (K) at that time, based on our yield and soil tests for the nutrient management zones,” Myerholtz says.

They have been strip-tilling corn for about 10 years, but it wouldn’t be possible without RTK, he says.

“We use a fixed RTK signal that controls our John Deere tractors’ steering,” Myerholtz says. “Depending on the tractor we are using, fertility and seeding rates are controlled by either an Ag Leader Integra or Insight monitor, based on the nutrient management zones we have developed in our SMS software platform.”

They apply fertilizer on the first pass of the 8 row Orthman 1tRIPr strip-till unit that’s fed by a Valmar dry fertilizer applicator with metering rollers controlled by the monitor. In the spring, they come back with a Deere 1770 planter with Ag Leader hydraulic down force controllers for seed and fertilizer. The setup also allows them to apply growth regulators and insecticide.

Point of Pain: Concern About Cross-Compatibility

Myerholtz’s philosophy is not to farm more ground, but to farm the ground he has better. As an early-adopter of new technology that helps him do that, can create issues, he says.

“When you’re one of the first to use this equipment in your area, you are also likely to be one of the first to discover incompatibilities in software or equipment upgrades,” says Myerholtz. “Hydraulic flow is a big issue because it’s so important in controlling the variable-rate units. Fortunately, I have a good dealer who can talk me through most issues.”

Myerholtz says he’s often the first one in the area to identify bugs in software upgrades. While some upgrades are free, many of them are “pay-to-play,” and he has to go along with it if he wants to take advantage of the new technology.

He is concerned that as chemical companies, seed corn companies and equipment manufacturers combine forces, his options may become limited and information on which he uses to make management decisions may become biased.

“When the equipment and the technology don’t play together very well, that affects my ability to be responsible with the crop inputs I have invested in,” he says.