By Clair Urbain posted on December 27, 2017 | Posted in Industry News 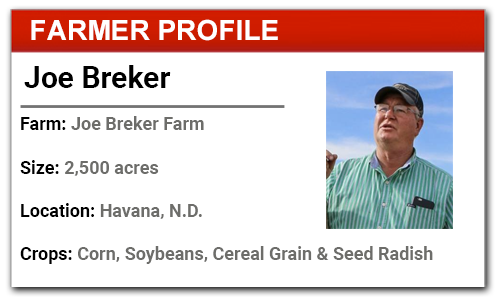 Joe Breker is a believer in precision farming equipment, but he takes a more holistic approach to managing his 2,500 acre operation in Havana, N.D.

Breker raises corn, soybeans, cereal grains and seed for the Jackhammer variety of radishes. His daughter, Olivia, and son-in-law, Austin Stenvold, also farm near him.

“I am not doing any variable-rate fertilizing or varying seeding varieties,” he says. “Instead, I think I am getting the best value from my precision equipment with RTK-guided steering that helps me improve soil health.”

Breker’s tractors, a Case IH 420 Rowtrac and 280 Magnum CVT, and his Case IH 4440 120-foot sprayer, all use Pro 700 displays for the RTK signal, which is provided through a subscription to the Rural Tower Network, which supplies an RTK signal across more than 3 million acres in Minnesota and North and South Dakota.

Breker’s Case IH 8230 combine also uses a display for yield monitoring.  “I’ve been using precision farming equipment for more than 20 years,” he says. “I started by using a yield monitor. It was the first time I was able to pinpoint areas that needed help or shouldn’t be farmed at all.”

Maps developed by his Pioneer seed dealer help Breker pinpoint problems, such as high-saline soils in certain fields. “Once we pinpointed those areas, we were able to tile them and use cover crops to improve soil health and yields,” he says.

After harvest, Breker uses an Amity single-disc, strip-till rig with banding units to seed a cover crop based on the field’s needs, then comes back with the unit in the spring to apply fertilizer.

“We straight-rate apply fertilizer, except in the case of composted manure,” he explains. “We will variable-rate that on areas where we want to build organic matter. We find if the soil has higher organic matter, fertility almost takes care of itself.”

After 39 years of no-till, Breker is seeing soil organic matter in the 6% range, so he only applies about 40 pounds of nitrogen (N) and regularly sees corn yields ranging from 150 to 180 bushels..

He plants corn and soybeans with a 16 row White 8516 planter with Martin Clean Sweep row units. “I move the memory card from tractor to tractor, depending on what I’m doing,” he says.

To no-till soybeans after corn, Breker simply offsets the tractor to run 15 inches off the previous year’s corn rows. While he can’t see farming without the automated ability to set guidance lines in the field for multiple crops, Breker admits it can be challenging if he loses the GPS signal in the field.

“While I am no techie, I really don’t want to operate without this system,” he says. “Sometimes, we do have a signal outage caused by a solar flare or other cause, and when that happens. I look around the countryside to see if other tractors are sitting in the field headland. Then I know it’s a signal problem. If they are running, that’s when I know I have an issue.”

Although Breker has come to rely on the precision farming equipment, it pains him to continue paying for the RTK signal as well as the equipment upgrades needed to use it.

“The cost of this equipment is my greatest point of pain,” he says. “The upgrades needed across four pieces of equipment can get expensive.”

The most recent one was to upgrade his receivers to  be able to use Russian Global Orbiting Navigation Satellite System (GLONASS) satellites for GPS. He needed the upgrade because the signal based on just U.S.-based satellites was spotty, he says.

Conversely, Breker says dealer support has improved dramatically in the past 5 years. “Before then, technical help could be hit or miss, but most dealers today have very competent technical assistance,” he says. “More than 90% of the time, the problem can be addressed over the phone. Having 24/7 technical help, especially in busy times of the year, is mandatory.”