By Jack Zemlicka posted on December 11, 2018 | Posted in Industry News

The manufacturing models of the farm equipment and automotive industries are intertwined, with innovations developed for consumer vehicles often finding their way into the production of ag machinery.

The momentum and consumer appetite for electronic and autonomous cars was reported as one factor in General Motors’ recent announcement to scale back traditional vehicle production in North America, resulting in planned plant closures and layoffs.

The Washington Post reports that the cost-cutting measures are designed to keep GM competitive in the evolving market and reflect an ongoing shift in consumer vehicle preferences.

So will ag equipment manufacturers face the same dilemma in the future as ag engineers refine electronic and autonomous machinery?

Not necessarily, says Todd Janzen, agriculture attorney with Janzen Ag Law in Indianapolis. Janzen suggests there are other factors which more heavily influenced GM’s decision which may not run parallel to ag manufacturers.

However, Janzen notes that ag manufacturers on the cusp of field-ready autonomous machinery and working toward fully electric equipment are wise to continue development and follow the trend being set in the automotive industry.

“One of the real lessons here is that it takes an enormous amount of capital to re-tool for a different market and product segment. When you look at the amount of money that these companies are spending to shift production with the new electric vehicles or autonomous technology, it’s billions of dollar and it takes years of development. I think the big lesson for the ag industry is to not wait until everybody else is too far ahead and you’re too far behind, but to invest in the new technology ahead of the curve, instead of when it’s too late.”

Janzen adds that farmer interest will influence the adoption of autonomous and electric equipment, but that as the technology matures, perhaps out of the automotive industry, it could become more affordable and attractive. 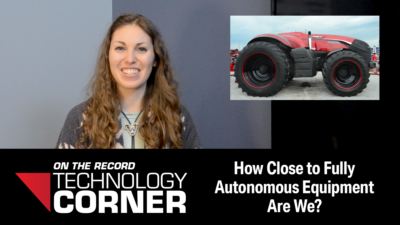 [Technology Corner] How Close to Fully Autonomous Equipment Are We?

Fully autonomous vehicles may be closer — and more necessary — than you think. That’s the argument of Bill Lehmkuhl, owner of Precision Agri-Service, an independent precision dealer group headquartered in Ohio. Today, we’re taking a look at some of the highlights on his autonomy timeline.
View More
Top Directory Listings