By Julia Gerlach posted on May 30, 2019 | Posted in Dealer Development, Autonomy & Robotics

The development of unmanned aerial vehicles (UAVs) and associated ag-specific software programs have made aerial imaging of farms more useful and accessible than ever before.

With the ever-improving quality of digital cameras, not only can service providers capture regular images of farmland, but they can also get multi-spectral images that provide information about plant health, soil health, plant population, water infiltration, pest outbreaks and more.

Additionally, software programs can “stitch” the images together to form a comprehensive view of large areas that can be loaded into yield-mapping software and layered for additional insights.

Bob Recker, owner of Waterloo, Iowa-based Cedar Valley Innovation and a retired engineer from John Deere, says it’s important to first “think about the why” of using UAVs. Recker started doing aerial farm imagery in 2008 as a passenger in an airplane with a window that opened.

He had a simple SLR camera with a zoom lens and would simply point the camera out the window and shoot images. When drones were introduced, he started experimenting right away and over time have developed these tips for growers interested in getting started with UAVs.

Recker shares these 20 tips for capturing the most practical value when taking flight with UAVs. 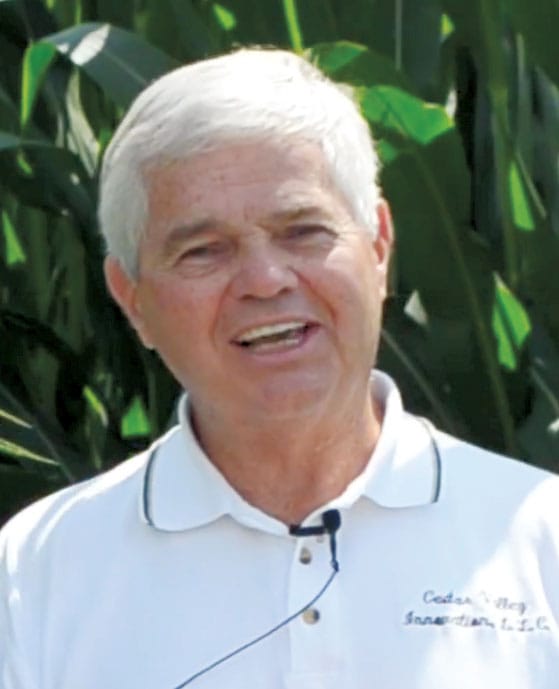 “The best images aren’t worth anything if you don’t go out to the fields to see what’s going on. Ground-truthing matters…”
— Bob Recker

Unfortunately, most problems can’t be fixed right away — most likely they will be issues farmers have to address in the following season and some, like wind events, can’t be addressed at all. But with imaging, there will be fewer surprises at harvest because they already know about a lot of the problems they will have encountered during the growing season.

Validating the Value of UAVs as an Operational Tool

With the ever-improving quality of digital cameras, not only can no-tillers capture regular images of farmland but they can also get multi-spectral images that provide information about plant health, soil health, plant population, water infiltration, pest outbreaks and more.
No longer are Unmanned Aerial Vehicles (UAVs) considered farm toys as they develop into decision-making tools, thanks in part to advanced software programs that can stitch images together to form a comprehensive view of large areas then uploaded into yield-mapping software and layered for additional insights.

“We’re evolving from a farmer buying a DJI drone from Best Buy and adding a camera to take pictures because it’s fun, to having UAV systems become a real part of farm operations,” says Mark Dufau, director of business development for AeroVironment, which manufacturers the Quantix hybrid drone ecosystem.

Dufau suggests one of the most significant impacts UAV technology has had is with fertilizer application verification, with farmers able to aerially scout, identify and treat trouble spots during the growing season, in an efficient, effective way. The Quantix system can cover 400 acres in 45 minutes, a more timely alternative than visually scouting fields on foot.

“We had a farmer with a center pivot system that was creating rainbow effect on the inside of that pivot and they had set the wrong fertigation rates which were creating bands of infertility and heavy fertility on those inside parts of their pivot,” Dufau says. “The farmer was able to identify the problem and go out and make those adjustments.”

Even though UAV technology has become more sophisticated, systems have become more automated, making them easier to operate and more tailored, with packages designed for individual producers, or scaled to meet the business needs of precision service providers.
But prior to getting serious about investing in a system, Dufau recommends that farmers get their Part 107 Remote Pilot Certification, which is a relatively easy process.

“It had been viewed as a big hurdle because farmers didn’t want to have to go get a pilot’s license,” he says. “In reality, it’s a 60-question multiple choice test that can be taken at your local airport. The certification is a requirement from the Federal Aviation
Administration for anyone flying a drone commercially, which includes farmers, and covers the regulations, operating requirements and procedures for safely flying drones.” Julia Gerlach is managing editor of No-Till Farmer. She has a lengthy background in publishing and a longtime interest in gardening and mycology. She graduated with a B.A. in music and philosophy from Alverno College in Milwaukee, Wis.