By Ian Gronau posted on June 15, 2016 | Posted in Dealer Development

Farmers and equipment dealers alike often wonder if and when small, reliable, autonomous ground-based drones will begin supplanting large tractors, combines and implements. In early May, attendees of the first agBot Challenge held in Rockville, Ind., were given a chance to see just how far the technology in this field has come.

The challenge called for design teams to build an unmanned, “robotic” planter that was able to follow programmed coordinates through a field while planting seeds and sending real-time information back to a computer. Teams from Purdue/South Newton High School (second place for a converted loader), Indiana University — Purdue University Indianapolis (IUPUI), University of Regina in Sask., (first place for a robotic tractor and seeding system) and Muchowski Farms, among others, participated in the challenge.

Pee Dee Precision Ag, a small independent team of four hobbyists based in Latta, S.C., also competed in the challenge and ended up finishing in third place, earning  $10,000 in seed money for the uniquely designed drone they call the Cricket. The team members, who come from backgrounds in agriculture, computer architecture, system design and mechanical engineering, put their heads together to build the drone completely from scratch.

“Having a varied team gave us the ability to design the drone from the ground up,” says Andy Herring, Pee Dee Precision Ag’s mechanical expert. “This means we started with just a pile of metal on the shop floor as opposed to taking an existing design and converting it. But it was also built in a way that is easy to mass produce, such as all the components being mirror imaged.” 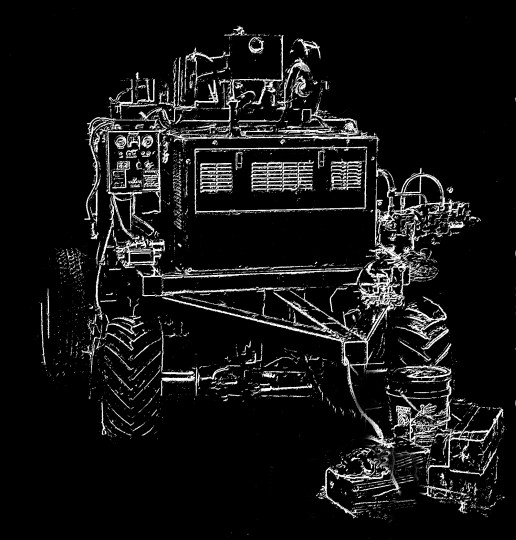 Weighing in at 2,500 pounds, the Cricket has an 18 horsepower diesel engine with hydraulic controls and a top speed of around 10 miles per hour. It’s fitted with two Case IH Early Riser planter row units equipped with Precision Planting vSet Select seed meters and 60 gallons of combined seed capacity. The  guidance system is based on a combination of RTK GPS and an inertial navigation unit.

“From a precision farming perspective, we’re looking at maintaining the effectiveness of current planters while trying to do away with the driver and having to hitch an implement up behind a tractor,” says Jerry Martin II, Pee Dee Precision Ag’s team leader.

While there is talk about a fully autonomous tractor being the next natural step in the evolution of precision equipment, Martin points out that a light drone, like the one his team is working on, has several distinct advantages.

“A fully autonomous tractor would still be just as heavy as an existing one, demand just as much fuel and still be really expensive to own,” says Martin. “I can see smaller implements taking over faster than self-driving tractors.”

Martin even goes so far as to say that there are some ways in which a smaller field drone can be potentially safer than other options.

“One of the biggest safety hazards on a farm is a tractor along with its PTO shaft,” says Martin. “They account for somewhere around half the deaths of farmers every year. Having a lighter vehicle that pilots itself could eliminate some of those accidents. It’s true that there are safety concerns about drone navigation issues, but on the flip side, so many of today’s tractors are on auto-steer already so there isn’t too much of a difference. However, accidentally driving a $250,000 tractor straight through a barn is a bit of a bigger deal than a collision with a much cheaper, lighter and slower drone.”

Despite the recent success that Pee Dee Precision Ag has seen with their design, Martin has no delusions about the road ahead for small ground-based drones. In addition to perfecting and simplifying the Cricket, they still need a commercially viable business model to bring the product to market.

The level of interest has been encouraging, and Martin feels that when small field based drones do finally break through, it will change the face of precision farming.

“Will they replace tractors? No. Can they replace some of the jobs done by tractor? Definitely,” says Martin. “There are probably going to be a lot of systems that hit the market in the next 10-15 years. There will be some weird ones and some white elephants, but I think eventually, a handful of different models might climb the pile and end up dominating. They will probably be the ones that manage to be the simplest to operate and the easiest to service.”

Martin says that for dealers, selling precision equipment to their customers is hard enough even without it being fully autonomous, but there will be a critical role for them to fill when the technology matures.

“There will be a fair amount of programming for field drones required, even for something very simply designed. A precision specialist can do it or train the farmer to,” says Martin. “There may end up being some liability attached to how the drones are programmed so a service industry may crop up around that.”

Pee Dee Precision Ag has already been approached by several dealers curious about stocking their product even though they are still in the development stages. Still working intently on perfecting navigation solutions, Martin says that if all goes well they are at least 3-5 years away from a commercially viable model.

“If these work well and save the farmer time and money, dealerships will want to stock them, and there will be programming and servicing that will be a part of that as well,” says Martin. “Something simple and reliable will emerge though. The models that end up dominating the market may very well be something that none of us have even thought up yet, but is right around the corner.”

Prioritizing Precision Growth From the Ground-Up