When the team at Tharsus Group wanted to consult an expert on agriculture automation, it realized there was only one person for the job. Prof. Simon Blackmore of Harper Adams University is the utmost authority on the design and build of agricultural and horticultural robots.

John Hannah, robotics and autonomous systems (RAS) lead at Tharsus Group, recently chatted with Blackmore about all sorts of important issues — ranging from the big questions such as how to solve the food shortage crisis we’ll face mid-century, right down to the nitty gritty on farming and its future. 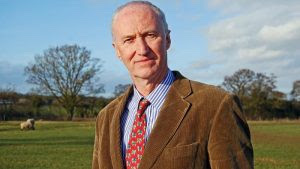 Below is an excerpt from the first part of that agriculture automation interview.

Hannah: How do we feed 9.1 billion people by 2050? This question often attracts polarized views. Tackling a problem of such magnitude calls for the application of a range of methods, systems, and technologies. It is now widely accepted that R&D investment in new agricultural technologies like robotics is critical to satisfy the future demand for food sustainability.

How much is the introduction of agriculture automation part of the solution to making cultivation sustainable? Do you feel there’s enough investment going on at ground level to support this?

Blackmore: There’s investment going into things like plant breeding, biotechnology, and chemicals. The thing that hasn’t changed much in many years is the investment into new mechanization systems, and so a lot of the solutions that we have now are heavily reliant on chemicals. There is an increasing drive now by the environmental lobby to reduce or ban more and more active chemicals.

The interesting thing is that everybody is concentrating on these active agents, but in fact, there is nothing wrong with them. The problem is with the machine that applies them. The problems that occur are when all of these chemicals are applied off-target.

So when farmers are spraying the whole field, and only 10% of the spray actually goes onto the crop, or 1% when you’re talking about pesticides, then we’re getting huge wastage. It’s all of that wasted chemical that’s going into the groundwater and causing the problem.

As well as monetary investment, there’s also a need to invest some time into educating different communities surrounding the agricultural industry, including farmers and the government.

The farmers who are at the heart of this sector need to see with their own eyes how easy, adaptive, and efficient these new high-technology products can be. How strong the economics are that support them. The only way we do that is through demonstration.

The government, which is a key beneficiary of the agricultural industry, is starting to open up the lines of communication. It has recently published a report built on the evidence I gave at the House of Lords a couple of months back about autonomous vehicles, so bit by bit we’re trying to raise the government’s awareness of the opportunities here.

In fact, one of the outcomes highlighted in the report was that “robotic agriculture should be supported more by the government so long as the business case is made.

[Podcast] Outlook and Obstructions to Advancing Automation in Ag