Data analysis, staff retention and avenues to navigate the ag economy topped the list for dealer focuses in 2019 and beyond.

2019 has seen interesting new developments in market sentiments, with dealers continuing to slowly move away from hardware and steer business objectives toward data management for future revenue, according to the seventh annual Precision Farming Benchmark Study.

With some 52% of respondents saying it was the “most important” area to grow precision business, data management service and analysis shot to the top of the priority list for precision revenue during the next 5 years. Only about 11% marked it as “least important,” the lowest score among the 10 options.

Planter control systems experienced a dip in priority, from 58% voting it “most important” in 2018 to just 43% in the 2019 study. GPS and guidance systems rebounded to claim second place on the priority list, with 44% ranking it “most important,” compared to only 32% in 2018.

Continuing a downward trend during the last 3 years, application technology hardware dipped to about 34% as a top priority for dealers, compared to 43% in 2018 and 52% in 2017.

There are a few trains of thought on the priority shifts away from planting and application technology, noted by dealers in the study. Some cite the increasing competition on the OEM side with fewer opportunities to “sell” customers into new systems, vs. upgrades or updates.

Other dealers note that customers are becoming less brand loyal, especially when it comes to precision equipment. A West Coast precision dealer says, “Most new OEM equipment comes with precision hardware already installed so the aftermarket business is mature. I think replacing broken or non-repairable field computers with current models — while still trying to provide added value when an unexpected expense occurs — will be the hardest sell.”

Perhaps the most interesting shift was a decline in dealers who viewed agronomic services as a critical part of their business in the future. After more than 43% voted the area “most important” in 2018, just 35% had the same outlook in 2019. Additionally, more than one-third of dealers voted it “least important,” compared to about 21% in 2018.

Consistent with the last 5 years, dealers have indicated an ongoing investment focus on personnel, including training and retention of quality employees. But some are turning their attention to adjacent areas of need in their dealership.

Employee training once again topped the charts, bringing in more than 78% of the “most important” responses and less than 1% of the “least important,” with little change from 2018 or 2017. This continues a trend that began in 2013, with dealers placing increased value on recruiting and retaining talent.

Adding precision staff is close behind as an important point of precision investment for dealers, garnering 63% of the “most important” responses and only 3% citing the area as “least important.”

Service vehicles and tools received a notable bump in popularity with 22% of dealers citing them as “most important,” more than doubling the total from 2018. This could be attributed to the downward trend in the farm equipment sector, leading more farmers to repair rather than replace out-of-warranty equipment, leading to additional service needs.

Meanwhile, CRM and precision business management systems trended in the opposite direction with about 26% viewing it as “least important,” compared to 15% in 2018. 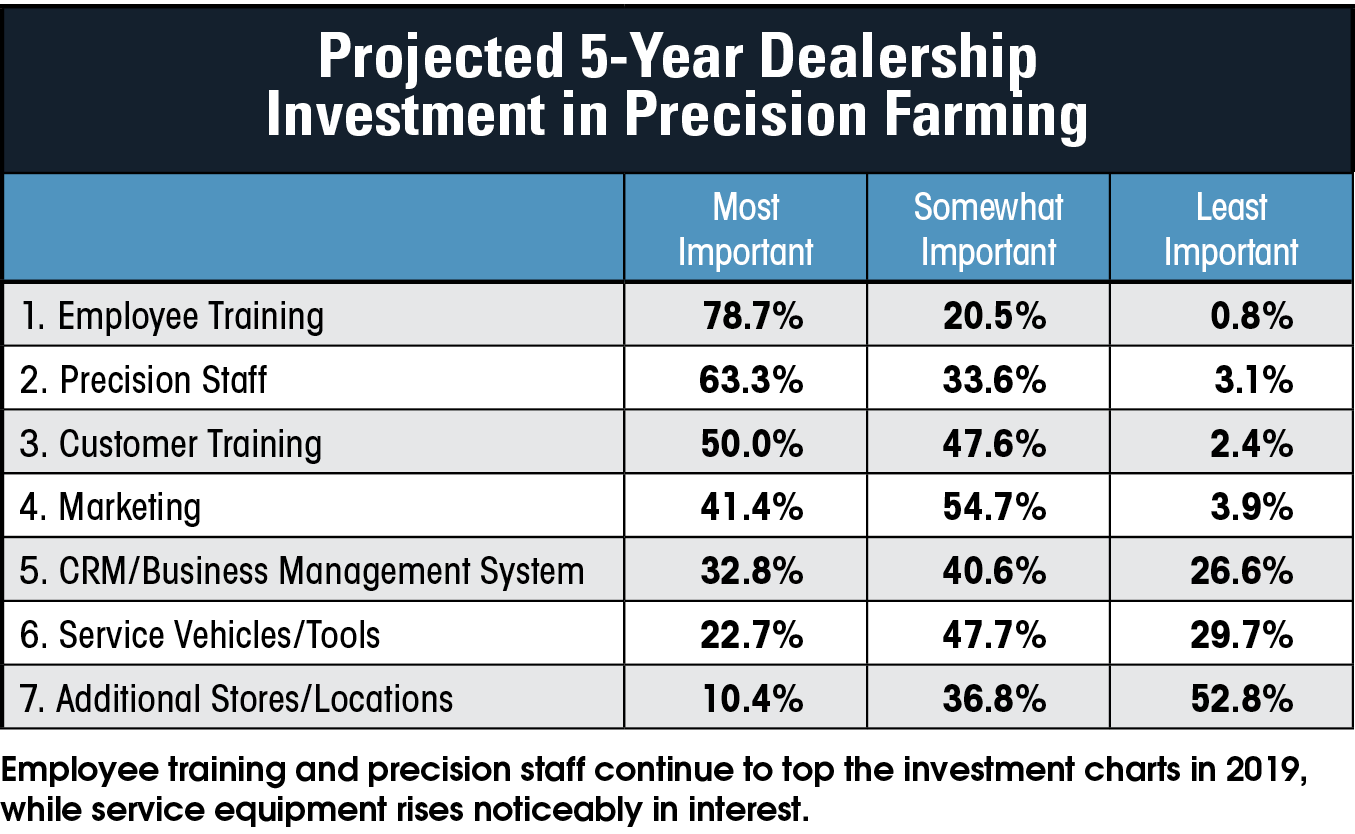 2019 sees more of the same for dealer concerns, with low commodity prices and high staff turnover rates posing familiar challenges. However, a variety of additional issues are floating to the surface that may prove to be more challenging in the long-run.

Roughly 30% of dealers mentioned staff retention and staff training as their key areas of concern. Some dealers are turning toward precision internship programs or partnering with local colleges to develop a pipeline of talent. But once dealers make a hire, they need to develop that specialist into someone they and their customers can trust,

When asked what they anticipate will be their biggest challenge confronting their precision business in the coming year, several dealers noted employee quality and availability as concerns, along with the ability to properly onboard and train new hires.

One Midwest dealer described their main issue as, “showing confidence in our precision technician. Experience will make a big difference in helping the technician build confidence.”

Others spoke on the current downward trend in the farm equipment market. Though 2017 saw dealers less concerned about the economy, the last 2 years have seen many mention falling commodity prices and a struggling farm economy as their main concern for the foreseeable future.

When asked about what they foresaw as the next “big leap” in precision farming tech, most dealers responded loud and clear with autonomous farm equipment. Having been discussed heavily at summits and tradeshows for the past few years and with OEMs dabbling in the tech, it is not surprising to find it on dealer’s minds.

Some had a specific future in mind, however. As one dealer put it, “[Automation] is there now but there needs to be lots of tweaks such as improvement of grain loss sensors in combines.”

Still others thought more immediately when asked about future improvements. One dealer says, “A practical "big leap" will be the refinement of CAN and ISO communication across brands. There are more advanced leaps coming, but I feel this is the most likely to happen and be adopted by the industry with red, green and blue machines all communicating seamlessly.”