Customer education, employee stability and expansion of support revenue are primary targets to increase revenue now and in the future.

The last 6 years have seen both subtle and dramatic shifts in dealer priorities with precision business. For the first few years, hardware held a firm grip on the most promising areas for future profit, but there has been a gradual shift in where dealers see their greatest growth potential.

That’s not to suggest dealers are abandoning hardware as potential sources of precision profit — it’s just taking different forms. This year, 58.9% of dealers say variable-rate is the most important source of precision revenue growth during the next 5 years, topping the list. Only 3.9% of respondents ranked it the “least important” area, by far the smallest total in 2018.

Ranking second is planter control systems, which includes down force, row clutches electric drives and seed meters, with 58% of dealers ranking this category as “most important” during the next 5 years. Planting and seeding controls have historically been viewed as a precision revenue priority with 60% of dealers seeing it as “most important” in both 2017 and 2016.

The most interesting change came in application technology hardware — seeing a 10 point drop — in dealers who viewed the category as “most important” year-over-year. Some 52.2% cited this area as a top priority in 2017, compared to 43.2% in 2018.

Another big mover was agronomic service and field prescriptions, which increased nearly 10 points as “most important” to dealers, from 34.8% last year to 43.1% this year. While 21.6% still rated this area as “least important,” it’s half the total of 2017 (42.7%), signaling that dealers are putting more emphasis on this area for the future.

How dealers view future revenue opportunities may have shifted during the last 6 years, but their priorities for where they plan to invest in precision growth during the next 5 years largely remained the same, albeit with a few interesting changes. 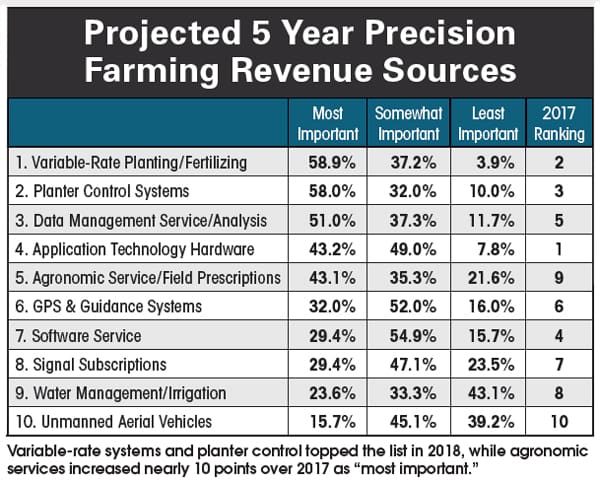 Employee training again topped the list in 2018, with 71.2% of respondents viewing this area as the “most important” of investment, down slightly from 2017 (75.5%). This emphasis is consistent with dealers’ historical view as employee training easily topped the 2013 benchmark study list.

Adding precision staff continues to be a priority as well, ranking second on the 5-year forecast list this year, with 63.6% ranking it as “most important” and only 1.5% citing it as “least important” tied with employee training. Interestingly, only about one-third of dealers (37.3%) cited additional staff as their greatest need to grow business in 2018 perhaps underscoring the scarcity of talent as well as the competitive landscape for reliable specialists.

Looking at other top priorities in the coming year, starting to bill for precision service remained a hot item with 51% ranking this as their “most important” area to grow revenue. But interestingly, a high of 19.6% of respondents also ranked this area as “least important” during 2018.

In 2016, nearly one quarter of respondents cited low commodity prices as the biggest challenge they expected to face. Fewer dealers cited the economy as a concern in 2017, and only a handful noted it as an ongoing challenge this year. 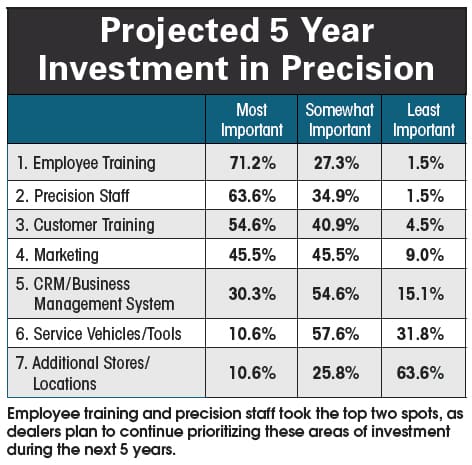 But there are other obstacles to achieving the projected growth dealers are planning for this year and beyond. From market saturation, valuation of aging precision inventory and filling staff vacancies, dealers shared their greatest challenges, along with potential solutions.

In some cases, dealers are getting creative to offer more satisfying and simplified service for customers. As one farm equipment dealer in Nebraska explains, “The biggest challenge confronting our precision farming operation in the year ahead continues to be a lack of support from our main product line supplier. The information flow is mostly a one-way street in that we send information up but very little comes back down.

“To deal with this, we have invested in software to analyze CAN and electrical systems to faster identify the issue and keep our customers going.”

The most commonly shared challenges among respondents were the need for enhanced or increased training along with more streamlined billing practices. “Farms’ ability to pay for the service and see a return on their investment remains a challenge,” says one precision dealer in New York. “There will always be a disconnect between field observations and recorded data, so we need to have constant feedback from customers to ensure we don’t go down a rabbit hole looking at an anomaly that would be explained easily if the customer was doing the work.”