Ryan Nell shares perspectives for precision dealers on how he sets auto-steer lines in a strip-till system and manages nutrients with accuracy on his corn and soybeans.

Beaver Dam, Wis., strip-tiller Ryan Nell offers perspectives for dealers and guidance for first-time strip-tillers on maintaining RTK auto-steer consistency in the field and on the headlands when planting corn and soybeans on his 2,200-acre operation, which he runs with his father Ron. He also shares nutrient management learnings from his transition to strip-till. Nell uses a Kuhn-Krause 12 Row Gladiator on an 8770 John Deere tractor to strip-till and follows with a Chandler 10-ton variable rate spreader.

American sportscaster Erin Andrews once said, “Success doesn’t happen overnight. Keep your eye on the prize and don’t look back.” In the same way, precision strip-tillage is a lot like sports. Practice makes perfect and hard work pays off.

While it may take more time initially to calibrate and adjust, auto-steer saves significant time and resources in the long-run. “Getting the auto-steer part of it figured out makes strip-till that much easier,” says Nell. He’s spent years adjusting his precision auto-steering equipment.

However, it’s an ongoing effort and Nell has a lot to share about what he’s learned. “I feel in strip-till … that should be your goal. To take your markers off and not have to [drive]. It allows for less error and less compaction,” he says.

The Nells have been using a John Deere RTK since 2012. “RTK for strip-till is basically a necessity,” says Nell. Straight rows are the easy part. But over the last 4-5 years they’ve put a lot of effort into calibrating the auto-steer for their headlands.

Now it’s at the point where Nell doesn’t drive most of the headlands anymore on his land. “Over 75% of our headlands now is a pre-made auto-steer line, an AB curve or a straight-track,” says Nell. “We’ll spend more time on the corners changing to the correct line than actually driving.” 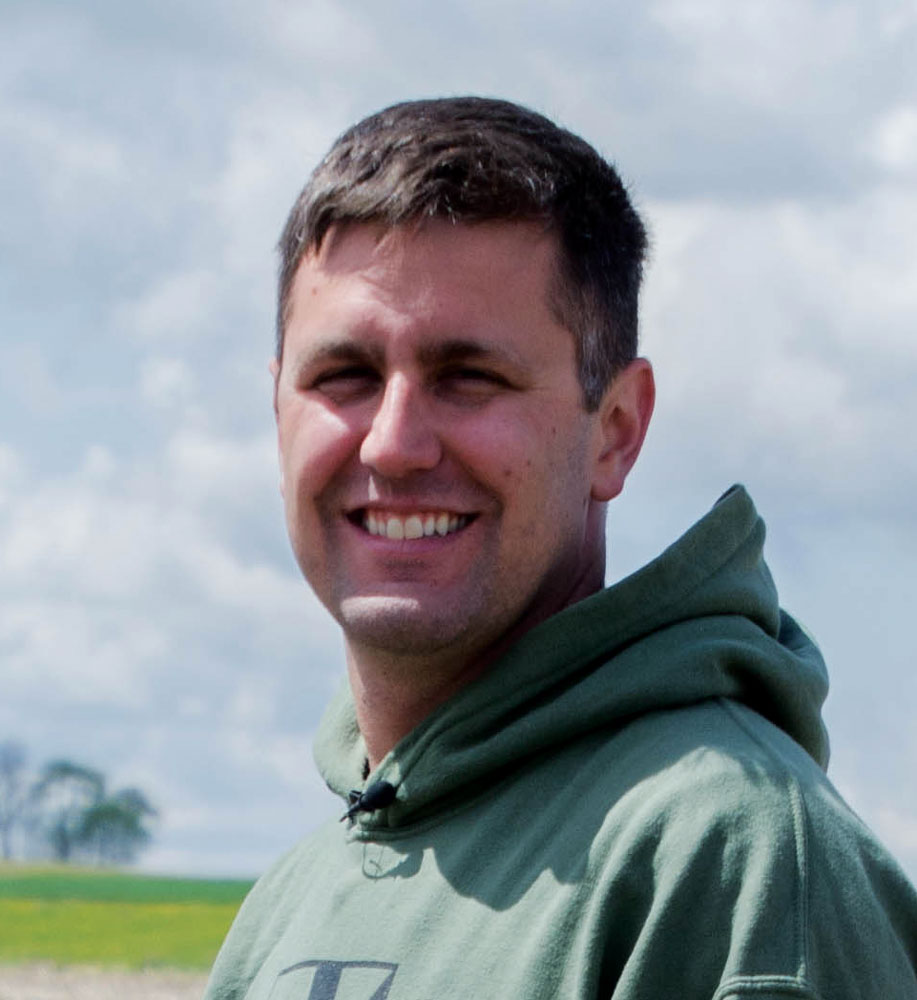 “That’s the beauty of precision farming; you can focus your efforts where they matter…” – Ryan Nell

To get to that point, Nell started by simply mapping out the fields and marking the lines. “We put a GPS on top of our Gator to mark lines with an RTK globe,” says Nell, “and that’s how I would set lines.” After setting the initial lines, they follow during planting to ensure everything is on track, stopping to adjust as needed.

Nell explains the best time to make lines for auto-steer in strip-till is after soybean harvest. “Take the time in the fall, if you do fall strips, to make sure you get the line that you want,” says Nell. He’ll drive back and forth, spending extra time in the fall, to set a more permanent and reliable line for the remainder of the year and into the spring.

Even after the lines are set, keeping them organized can be a challenge. Nell further explains the importance of labeling the lines correctly in the field. It’s especially important if there’s more than one person working with the auto-steer equipment. This helps keep everyone on the same page.

“It wasn’t easy. I’m not going to deny that,” says Nell, “I mean, getting the proper lines made, understanding shift-track, and shifting certain lines.”

The Nells learned this the hard way last season. They strip-till with a 12-row bar and plant with a 24-row planter and realized during planting that they were shifting the AB curves the wrong way. In Nell’s experience, the best way to troubleshoot issues like this is to stay involved in the day-to-day management and become thoroughly familiar with the equipment.

When it comes to the day-to-day management, Nell recommends simplifying where possible. This not only saves time but helps maintain auto-steer accuracy and effectiveness. One way they’ve streamlined management is by strip-tilling and planting in the same direction. In a strip-till system, where staying on the lines is especially important, this method reduces complexity and increases accuracy.

If problems persist, Nell collaborates with his dealer. As a dealer with precision expertise, you can offer customers a new perspective or have a deeper knowledge of the auto-steer or tractor to help solve problems.

In the end, for Nell, it’s all about adjusting and adapting. There may be issues where he needs to grab the wheel, but at this point those problems are few and far between due to careful management and preparation. “Errors can happen, but you grab the wheel if you need to,” says Nell, “That’s been kind of our motto. You can always grab the wheel and drive … but if it constantly keeps happening … we need a solution to what’s going on.”

Nell spent the first few years of his transition to strip-till adjusting his nutrient management practices. It took quite a bit of trial and error to find the right process and balance for the strip-tilled fields. Eventually, he found success using a precision farming approach with a variable rate spreader.

In their first year of strip-till, Nell says they were running a large amount of a uniform nutrient blend on all their fields. However, they discovered it wasn’t necessary when their soil tests showed a high degree of variability in nutrient availability from field to field. Nell says based on the soil tests it didn’t make sense to use a uniform application on most of their farm. This led them to start experimenting with custom prescriptions and a precision farming approach.

Nell purchased a Chandler 10-ton variable rate spreader while transitioning the rest of his operation to strip-till. Using this, the Nells have been able to run the fertilizer prescriptions they’ve customized, meeting the unique needs of the farm.

“Less is more when it comes to nutrient management in precision farming strip-till systems,” says Nell. “That’s the beauty of precision farming; you can focus your efforts where they matter. It might take some additional investment and time up front, but the struggle in the fall is worth it in the spring.”