By Clair Urbain posted on May 6, 2015 | Posted in Equipment Compatibility 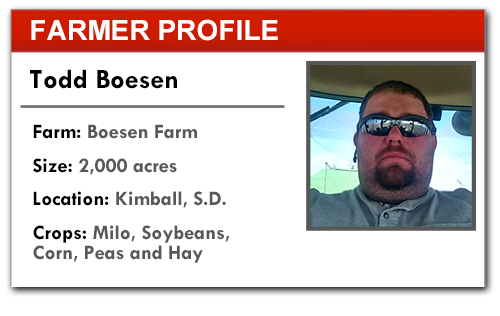 Todd Boesen farms near Kimball, S.D., and has 2,000 acres of milo, soybeans, corn, peas and hay, primarily for feed for his livestock operation. Boesen integrated precision farming equipment into his operation more than 8 years ago and finds that RTK-guided equipment is essential for strip-tilled crops.

“We do some custom work and RTK is really important with an 8-row strip-till unit followed by a 16-row planter,” he says, “The accuracy also helps me get peas planted as close as possible to old corn rows so they can vine on the old corn stalks.”

During haying season, Boesen uses auto-steer on his swather, rake and baler. “It helps us make nice straight swaths, which makes raking and baling easier,” he says. “It really reduces fatigue.”

It took Boesen 3 years to justify the payback of using an RTK signal for guidance, but strip-tilling in front of the planter required it. With a mounted planter, he needed plenty of headland to get his John Deere 8970 with ATU auto-steer and trailing Montag fertilizer cart straightened out before dropping the planter.

“It created quite a bit of tail wagging until the system got straightened out,” he says. “When I upgraded to a Deere 9420 tractor with integrated auto-steering, it straightened out faster.”

“Running all Deere equipment is good and bad,” Boesen says. “The controllers don’t always play well with other brands.”

For example, Boesen used a Dickey-john dry rate controller to apply fertilizer along with his planter pass. The system used two motors to control application rate and the 2630 interpreted this to mean the planter was covering a 60 foot pass instead of a 30 foot pass.

“It took some time working with the dealer to solve this,” Boesen says. “We had to cheat the system by telling it the dry rate controller was covering only 15 feet, applying a double-rate of fertilizer to achieve correct rate for the 30 foot planter.”

Because he does custom strip-till and planting for other farmers, Boesen is forced to subscribe to two Deere dealer GPS correction signals because of spotty coverage.

“I need to be within 8 miles of the tower to get a consistent signal, even though they say it has a 10 mile range,” Boesen says. “I improve my accuracy by mounting another RTK globe receiver on my pickup and then parking it at the edge of the field and run it as another base station. This gives me consistent sub-inch accuracy.”

Boesen says it annoys him to have to subscribe to two different services from different dealers to get the coverage he needs. “They are both Deere dealers, so why can’t I pay one fee and get access to both?” he says. “Cellular-based RTK may be a better option.”