By Clair Urbain posted on May 11, 2016 | Posted in Equipment Compatibility 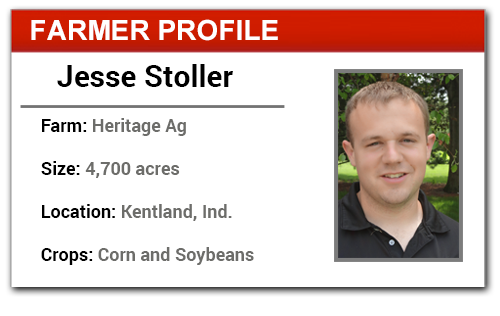 The Stoller family farms 4,700 acres near Kentland, Ind., and have almost always had a John Deere fleet of equipment. But as they transition to strip-till in both corn and soybean rotations, they added a Case IH RowTrac 470 tractor into the equipment lineup in 2015 to help them reduce soil compaction.

Jesse Stoller, his brothers and father, have been transitioning to strip-till the last 3 years. They use a SoilWarrior to build fall strips and then follow with another strip-till pass in the spring to freshen the strips and apply a straight rate of 28% nitrogen on corn ground.

The Stollers plant corn with a self-built, 60 foot, 24 row planter using a Harvest International tool bar and Kinze row units outfitted with Precision Planting meters, drives and a monitor. They plant soybeans with a 16 row Deere 1770 NT planter that is occasionally used for corn planting as well.

Stoller says they had little trouble tying the Deere GPS signal to the Precision Planting monitor and have had great luck using their five StarFire 3000 RTK systems in their green tractors. However, when they brought the Case IH tractor into the fold, they had to abandon using the guidance systems to freshen strips for corn planting this spring because of tracking issues.

One of the challenges the Stollers encountered was getting the controller and receiver to communicate with the Raven steering controller in the tractor.

“We, along with our local Deere dealer, tried everything to get them to communicate correctly,” Stoller says. “We finally had to park the tractor and prepare the fields with a pass using a Salford vertical tillage tool.”

Stoller says he was frustrated with the incompatibility to the point that they considered moving back to one brand of tractor. “It all comes down to dealer support,” he says. “The equipment is only as good as the dealers that support it.”

Stoller is equally frustrated by some of the gaps in precision equipment accuracy. In their search for more accurate yield monitoring, the Stollers chose to use a Yield Sense monitor in their Deere 9670 STS combine.

“As we increasingly use yield data to build variable rate prescriptions, we want the most accurate data possible,” Stoller says. “I am concerned that the data isn’t accurate enough for how much weight we put on it.”

This year, the Stollers are looking to variable-rate sidedress 28% N with application maps produced by the 360 Yield Center program that records soil type, slope, past fertility records, yield data and present growing conditions.

They plan to apply the fertilizer with their Fast sidedress machine and Deere 4630 sprayer with Y-drop nozzles on its 80 foot boom. “We want to be able to spoon feed corn, even later in the season,” Stoller says.

However, managing all this data takes quite a bit of effort and Stoller is not entirely sure the prescription rates will make a difference. They use SMS software to manage the data from various sources and the FieldView app to move data from the cloud to other controllers.

“We can create all sorts of maps, but what truly is the effect on yield and what really helps the bottom line?” he asks. “It is extremely hard to perform accurate testing in our industry because of the many uncontrolled variables, making it difficult to truly quantify results in dollars.”

10 Precision Farming Mistakes & How to Avoid Them

In this FREE 7-page ebook, Ag Info Tech CEO Tim Norris, shares his "Top 10" do’s and don’ts from his experience as a precision ag retailer, starting in 1997.

Equipment Mixups Can Cost Time in the Field