A project involving 3D camera technology currently being developed at the University of Lincoln, UK, could result in a fully automatic robotic harvesting system for broccoli.

The University of Lincoln was one of more than 70 UK businesses and universities to share funding through the £70 million Agri-Tech Catalyst, which aims to improve the development of agricultural technology in the UK. 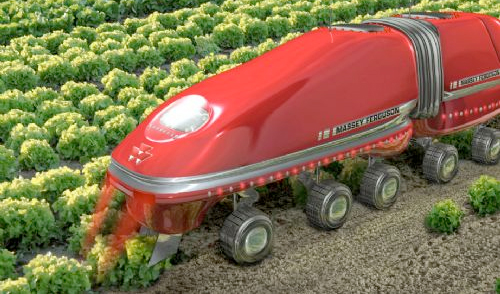 The project, which is jointly funded by BBSRC and Innovate UK, will test whether 3D camera technology can be used to identify and select when broccoli is ready for harvesting. This will be a key step towards the development of a fully automatic robotic harvesting system for broccoli, which will significantly reduce production costs. It has been praised as ‘world leading’ by UK Farming Minister George Eustice.

The research team comprises academics Professor Tom Duckett and Dr Grzegorz Cielniak from Lincoln’s School of Computer Science and Dr Simon Pearson from the University’s National Centre for Food Manufacturing (NCFM) at Holbeach. The main industry partner is R. Fountain & Son Ltd, horticultural consultants based in Boston, Lincolnshire, who will be responsible for creating the broccoli-cutting device.

Project lead Professor Tom Duckett, group co-ordinator of the Agri-Food Technology Research Group at the University of Lincoln, said: “Broccoli is one of the world's largest vegetable crops and is almost entirely manually harvested, which is costly. This technology is seen as being an important move towards developing fully automatic robot harvesting systems, which could then be used for a variety of different crops.

“In all our agri-related research work, our mission is to develop new technological solutions for the business of producing food through agriculture. The long-term impact of our research includes safer food, less waste, more efficient food production and better use of natural resources, as well as promoting human health and happiness.”

Head of Agriculture and Food at Innovate UK Ian Meikle said: “The Agri-Tech Strategy aims to make the UK a world leader in agricultural technology, innovation and sustainability. The funding decisions are expert-led and evidence-based. They support great ideas that address challenges of the future in food and farming. With business, research and government working together, these investments can unlock potential and deliver major benefits for society and the economy.”

Another project benefiting from the University of Lincoln’s expertise in this area is the early detection and biocontrol of prevalent diseases of mushrooms and potatoes.

Also funded by Innovate UK, this project addresses challenges associated with the identification, prevention and management of disease by developing diagnostic tools for farm use and alternatives to chemical pesticides. This will enable the primary producers in these industries to rapidly diagnose the existence of disease and facilitate earlier decision making.

It is anticipated that this project will develop a long-needed alternative to the use of pesticides by the mushroom and potato industries, thereby ensuring their future sustainability.

Principal Investigator Dr Bukola Daramola, from the University’s NCFM, said: “Food loss from farm to fork, due to disease and spoilage, causes considerable environmental and economic effects. The outputs of this project have the potential to significantly address the challenges presented to the mushroom and potato sectors by pathogenic bacteria and fungi, their detection and resistance to treatment. At the heart of the project is a drive to develop robust solutions for bio-monitoring and bio-control, leading to scientific advancement and the marketing of products which will ultimately have significant economic and societal benefit for the UK and beyond.”

"Until now, thanks to a reliance on large scale, mechanised agriculture combined with cheap labour in emerging economies, the routine deployment of robotics has been confined to a small number of specific tasks, such as milking, feed distribution and farm cleaning", explained Prof. Simon Blackmore, head of Engineering at Harper Adams University College.

"Earlier attempts to build complex robots capable of using virtual sight to, for example, harvest difficult to handle or delicate crops met with the conclusion that such robots were not sufficiently robust, were too slow and too expensive."

Robot researchers found that the combination of human hand eye co-ordination, dextrous manipulation and advanced object recognition was desirable, but simply too challenging. With support from the EURON and EUROP robotic networks, the Forum saw the founding of EARN, the Euro Agri Robotics Network.

"We’ve started with a clean sheet of paper", commented Blackmore. "We’re re-evaluating the whole approach to agriculture. At the moment, crops are drilled in straight rows to suit machines, but what if they were drilled to follow the contours of the land, or to take account of the micro level environmental conditions within a portion of a field? The potential boost to production we could generate if harvests were staggered to suit the crop rather than mechanisation is immense. We’re talking about micro tillage, mechanical weeding and planting using small, smart, autonomous, modular machines."

Delegates at the Forum saw demonstrator multi task robots from The Universities of Copenhagen, South Denmark, Wageningen and Kaiserslautern and the research institute of WUR in The Netherlands in action.

One application was the robotic Crop Scout, a monitoring platform capable of measuring crops and checking for disease. Currently, farmers routinely use pesticide and herbicide as a prophylactic and spray their crops whether pests or disease are present. Trials with the Crop Scout resulted in a 98% reduction in the amount of spray used, as the Robotic Sprayer sent by the Crop Scout treated only the small area affected by disease or pests.

The new generation of agricultural robots have notched up some impressive trial results already. Though much smaller than typical farm machinery, they can act co-operatively and carry out tasks such as spraying with a boom. Lasers are used for multiple tasks, from harvesting to weeding.

Tractor operations like ploughing, disking and harrowing always create soil compaction and also typically move over 65% of the field area while operating. Yet studies show that 90% of cultivation energy is used to repair damage caused by tractors.

"The obvious conclusion is we must stop running tractors on land wherever possible", said Blackmore. "The new generation of lightweight robots will move on wide, low pressure tyres and only cultivate the minimum volume of soil to create the required seed environment. Seeds will be precisely placed, according to soil moisture levels. Their movements will be controlled by SAFAR (Software Architecture for Agricultural Robots) and routes will be planned via Google Earth.

These demonstrators have also proved themselves capable of selective harvesting, enabling farmers to grow a higher quality of crop, as those plants that still need time to grow, are left in the field.

"Unlike industries like aerospace, agriculture is a low margin industry, so it is vital that these new robots are both robust and affordable. Realistically, they are bound to be put to work on high value crops to begin with – there have already been trials on sensors designed to artificially "smell" ripeness. Agriculture twenty years from now will be a mix of the traditional and the new, but the new robots will be intelligent enough to work with the natural environment to maintain both economic competitiveness and sustainable, high quality food production."