By Ian Gronau posted on September 8, 2015 | Posted in Product Innovations

Precision specialists often think of GPS in terms of their customers’ needs, but adding tracking to company vehicles can offer some efficiencies.

Precision specialist Brice Henning says that the tracking device is so small that it’s not easily noticed, and someone attempting to steal the vehicle isn’t likely to notice it. The added protection has resulted in insurances savings for the dealership.

“It was about a year and a half ago when the dealership got them,” he says. “At first we were all feeling a bit of doom and gloom about it because we thought it’d be like someone watching over our shoulder all the time, but over time, we’ve been able to get a lot of use out of it as a tool.”

The device the dealership uses is a GPS tracker made by GoTrack. They currently use it across all 4 locations on about 12-15 vehicles at each store. The original impetus behind the idea was insurance.

“If anyone stole a vehicle, we’d know right away where they were,” Hennings says. “We have a lot of vehicles scattered everywhere, so even though the insurance savings aren’t huge, they’re at least enough to pay for the system itself.”

The tracker itself is a small, black cartridge about half the size of a playing card that plugs into a vehicle’s OBD-II port. The device’s hardware is restricted to just the cartridge and the program itself is Web-based and purchased through subscription.

Among the features Hennings has found useful are the Google Earth maps, which tracks each location’s fleet and is color-coded. This feature also allows salespeople, technicians and precision specialists to pin all customer farms, sheds and houses as well. 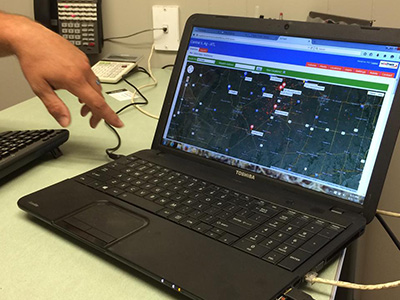 Central Illinois Ag’s new GPS tracking system on all their vehicles is monitored on a Web-based Google Earth map interface. Each one of the dealer’s 4 locations are represented by different colors and vehicles are indicated by pins and each of their customers’ farms and sheds are shown as dots.

“All the techs have to do is punch in the customer’s names for directions if they don’t know where they are,” Hennings says. “We’ve even used it in the fog when a tech couldn’t see where he was going. We had him drive slowly enough so it would update and got him to where he was supposed to be.

“Also, it helps me get right to service guys out in the field. I can look up their vehicle and drive to the location, rather than having them tell me turn left at the big tree and drive 4 miles out.”

Hennings has also noticed that the trackers save him time during the busy season when he is spread thin. Simply pulling out his iPad to see where everyone is has been far more efficient than calling around or even ending up on hold when the season is at its most hectic.

“If I’m all the way on one end of the service area and something comes up on the other side, it’s been a useful tool to quickly see if someone might be close enough to help out,” he says. “The service managers use it a lot too because they can schedule visits on the fly for techs who are out in the field.”

Even though Hennings says that staff has quickly adjusted to the device and the discomfort of being tracked has faded, the dealership is afforded some extra supervisory capabilities. For example, the device also tracks speed in addition to heading.

“We have a speed limit setting, and if we go over, three different people get email notifications,” he says. “It also has curfews, so if someone turns a key at 2 a.m. in the morning, it lets the dealership know.”

The Need for Reverse Mentoring in Dealerships' Precision Departments

Equipment, Demos to Highlight Farming with GPS at Waseca's Farmamerica