Solving the Seasonality of GPS Setup and Use 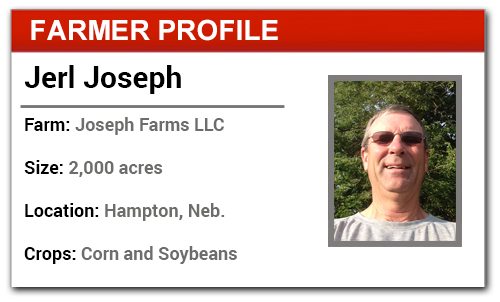 Jerl Joseph of Joseph Farms in Hampton, Neb., says on his irrigated and dryland crops, GPS-driven precision farming tools have helped him identify problem spots in fields. It helps him adjust seeding and fertility rates, and while it hasn’t been a seamless journey, Joseph says it makes him a better farm manager.

“Farmers aren’t always very good about keeping records,” he says. “If we were, we’d quickly find the things that aren’t sustainable.”

Joseph’s first foray into GPS guidance was with a John Deere GreenStar brown box following a WAAS signal that he still uses for guidance in his Deere 8300 tractor, primarily used for discing. He has since upgraded to a StarFire 3000 monitor and uses an RTK signal for guidance to achieve sub-inch accuracy on his planter and combine.

“We have some ditch irrigation and it makes a big difference in hilling up corn,” he says.

Joseph predominantly ridge-tills his crops and the RTK signal helps him stay on track. “I can sure tell at the end of long planting days that it’s less fatiguing,” he says.

Collecting yield data for nearly a decade, Joseph admits that crunching the numbers can be a labor-intensive job to produce yield data based on population and fertility maps.

“We have almost 10 years of data, and it takes it a while to sort through that data to produce reports and population prescriptions,” he says. “But it has been very helpful in identifying trouble spots in fields and we’ve fine-tuned population and fertility in those areas.

“I always had an idea where the trouble spots were, but this showed some problem spots under pivots that I wasn’t aware of. Even if it is irrigated, some very sandy spots still didn’t produce well, so in those areas, we reduce the population.”

Although Joseph doesn’t find the Apex software very user friendly, he appreciates how it assembles information.

“We had to make a hail damage claim one year and it was simple to pull the field information together for the insurance company,” he says. “It was all in one spot. Otherwise, I would have had to search for that information in quite a few different places.”

Although Joseph is an experienced GPS user, he says the seasonality of using the equipment creates the most problems. However, his dealer’s technicians almost always can talk him through any skipped step.

“Often, it’s missing just one check box or step,” he says. “This equipment is set up so you can’t skip steps.”

The monitor controls steering, population and row shut-off on his 16-row Deere 1720 planter that’s pulled by a Deere 8310R tractor. In the fall, his Deere 9670 combine uses the monitor to collect yield data, which Joseph manages with the Apex farm management software.

Because of his lengthy experience with the GPS system, Joseph subscribes to the lowest level of RTK subscription and dealer support. He takes advantage of the annual precision farming meetings his dealer presents to make sure his software is up to date and to learn ways he can leverage his data.

“The Apex program was hard to learn at first, but after a few years, I got used to it. If my dealer would not have crammed teaching the whole program into one meeting and instead spread it out over two or three meetings, it would have been better,” he says. “The yearly one-afternoon meetings for Apex are good, but for first-time users, that isn't quite enough.”

At this point, any glitches Joseph has are almost always related to operator error. “It’s easy to do when you only use this equipment for short periods of spring and fall work,” he says. “Getting back up to speed each year is important and I rely heavily on my dealer for that, so it’s critical that I have someone to depend on for that service during busy seasons.”

Keeping Farmers on the Forefront of Technology