A new handheld device that allows farmers to test DNA from crops and weeds themselves will be on the market soon.

The new technology allows farmers to check for specific genetic traits in crops or weeds. That way, they'll instantly know if their crops are drought or insect resistant or if weeds in their fields are herbicide resistant. It's the first time this type of technology will be available to farmers. 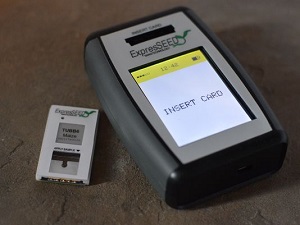 Farmers simply need to crush a leaf or seed from a plant or weed and put the leftover liquid into a cartridge. They'll stick the cartridge into this new handheld device and results from the genetic testing will be uploaded to a digital cloud.

The device sends the farmer's GPS location with the data from each sample that's uploaded, so there's no need to write down which field the DNA sample came from. The cloud will be able to store several years worth of data, so farmers will know how the seed rates compare to what they planted years previously.

"Once you start underlining the genetics, you don't have to wait for the plant to grow to know what's going to happen," saiys co-creator of the device, Derek Lyons. "You don't need to ship samples to a lab anymore."

This new technology was developed by Lyons, a biochemist and an assistant professor at Simpson, and Simpson College physicist Aaron Santos. The two formed a company called DNP123, and own the patent to the technology that makes the device work.

They lent the patent to ExpresSeed, a company partially owned by Simpson College, to create and market the digital handheld device.

The disruptive technology doesn't fall in line with any current methodologies for DNA testing. Usually scientists study DNA by making more of it. They duplicate the DNA until it becomes visible and it takes large machines to make the process work.

Lyons and Santos found a new way to study DNA samples. They turned silver nanoparticles into nanostructures that look like dice. Each side of the tiny dice has an address. The handheld device tells the silver dice which specific gene the farmer is looking for. If the gene is present, the address on the dice that correlates with the gene will connect to the strand of DNA.

This causes the dice to line up in a straight line. While a strand of DNA is too small to see, the nanoparticles - which are 1 million times smaller than a strand of human hair - are visible. If the dice are scattered, the gene the farmer is looking for is not present in the crop or weed.

Why It's Good News for Farmers

DNA testing is generally a slow and expensive process. Farmers send samples into labs at Pioneer or Monsanto and then their samples wait in line to get tested.

Once the data comes back, Lyons says, farmers usually can't interpret it on their own, this new device will process DNA in 10 minutes and will come back as readable information. Not only will the farmer know information they need about their crops and weeds right away.

"Farmers haven't had access to this kind of data before," Lyons says. "Corn and seed companies such as Pioneer, the whole company is based on DNA information and making that available to everybody."

Who Else Will Benefit?

"There are countries in the world that can't supply food because they can't track genetics so they simply won't sell their seeds," Kielkopf says. "This is a tool to hopefully increase food supply in areas that are lacking the use of genetics information."

It could also help European countries and the Chinese, who want to know more about what's coming into their food supplies because the new device will prove whether GMO type traits are present.

The new technology could have also prevented the Syngenta lawsuit, in which the agribusiness giant agreed to settle tens of thousands of U.S. lawsuits filed by farmers over the company's roll out of a seed variety before it was approved by China.

Lyons and Kielkopf said they're unsure who their largest buyer will be. It may be farmers, or co-ops, or companies like Pioneer or Monsanto. The two are also unsure when the product will be available for purchase, although they do have a working prototype.

Simpson's Involvement in the Project

This project falls under the Emerge Foundation's umbrella, which is a private nonprofit that extends academic program services to the college's EMERGE business incubator.

EMERGE helps students gain real-world entrepreneurial experiences in start-up business and nonprofits. Simpson students were directly involved in the creation of the new technology, and they will help market and sell the new product once it is manufactured.

We recently shared some perspective in this segment on what the dealership of 2030 could look like, with a major emphasis on precision technologies like robotics and hyper-specialized services. But what are dealers forecasting as their best bets for growing precision revenue in the next 3 years?
View More
Top Directory Listings