So, which wireless communications option is best for you and your customers’ operations? What follows is a comparison of the most widely-recognized options on the four major factors of range, bandwidth, power, and cost. If you’re short on time, skip to the comparison table at the end for a brief overview of each connectivity option. 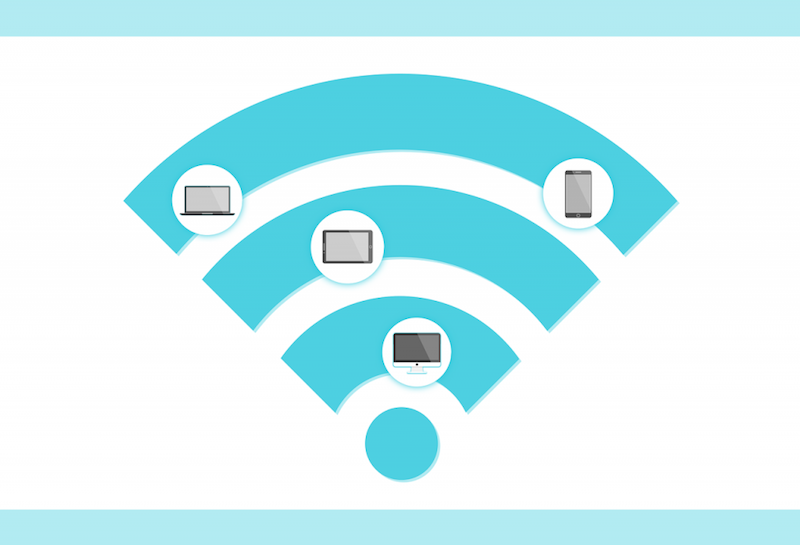 WiFi works across a few buildings, but expanding the range of your signal to fields and other areas of your operation costs more than it’s worth. A WiFi signal is attenuated (read: reduced) by walls, large devices, and bodies of water. That’s not ideal for an agricultural operation with large pieces of equipment, bodies of water, and miles of fields. And even without a lot of things in the way, WiFi range really isn’t that great. A general rule of thumb in home networking says that WiFi routers operating on the traditional 2.4 GHz band reach up to 150 feet (46 m) indoors and 300 feet (92 m) outdoors. Newer WiFi devices operating in the 5 Ghz range experience even more attenuation than traditional ones.

The major benefit of WiFi is that you can send a large amount of data over the connection. After all, this is the same type of connectivity you’d use to stream Netflix or play video games. So, while you can send huge amounts of data, the range is too short to be valuable in a large agricultural operation, especially in large fields.

WiFi hardware is also relatively power-hungry compared to other connectivity options designed for embedded devices. Connecting devices with WiFi also assumes that there is an uplink to the rest of the internet at the wireless access point your devices are connecting to. 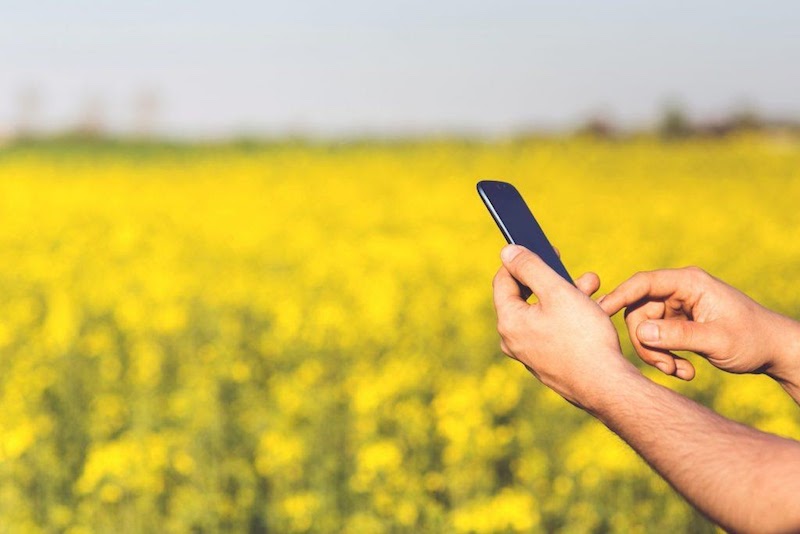 Cellular devices share many of the benefits of WiFi, and can be more flexible. Depending on the network your cellular device connects to, they can have very high bandwidth.

However, if each device has its own cellular connection, it will require its own subscription, and those subscriptions costs can add up. A cellular connection is also limited if your service provider doesn’t have a cell tower in range of the device you want to connect. This can be a big factor for farms or other rural locations, where cell service may be fine at the house, but could be non-existent a few miles down the road.

A cellular connection can connect to the cloud wherever there’s cellular coverage. However, the high bandwidth and easy cloud connectivity comes at a cost: power. Cellular connections require a lot of energy. If devices are battery-powered, they need a way to charge their batteries. If the device has access to line power, that’s not a problem. But for agricultural applications, remote is the norm, in which case a renewable source like solar power is a good option.

Result: Range dependent on cell signal, high bandwidth, draws a substantial amount of power, and is relatively costly on a per unit basis. 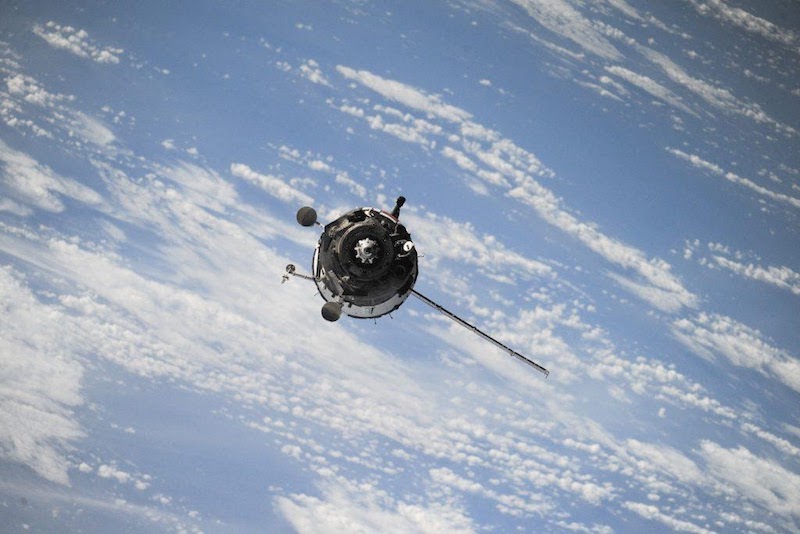 Satellite uplink can be used in areas with no cellular coverage. Range is essentially a nonfactor, because satellite coverage is available nearly everywhere on the planet. A disadvantage of this type of connectivity is that it requires line-of-sight with one or more satellites, so it won’t work indoors or in areas with a cluttered or non-open sky (under trees or near large buildings).

Satellite hardware and data subscriptions both cost more than cellular, and satellite has significantly reduced bandwidth. Power consumption is typically substantial, requiring additional supplemental power. However, satellite options are getting more affordable as smaller, smarter satellites are taking to the sky.

Result: Maximum range, low bandwidth, draws a lot of power, and requires a clear sky to maintain connection. The most expensive option, today. 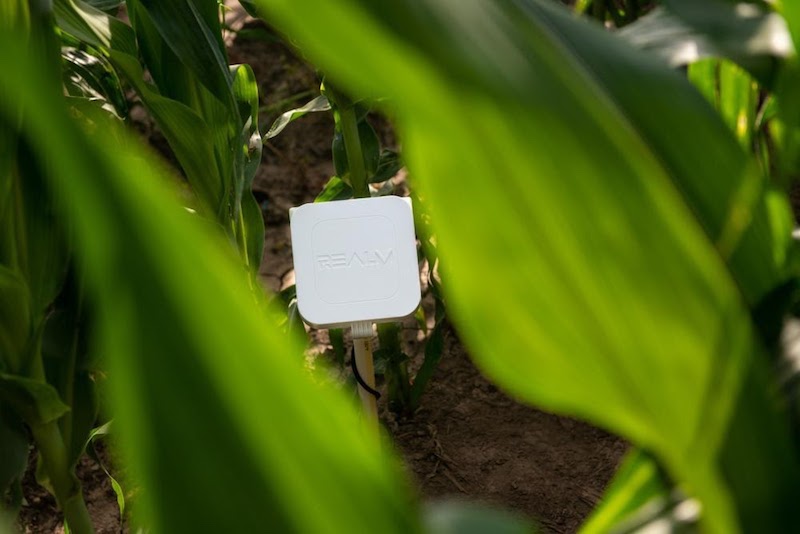 LoRa is a Long Range radio technology that uses inexpensive, low-power radios to transmit small amounts of information over long distances. LoRa uses an unlicensed part of the radio spectrum — just like you can plug in a WiFi router without having to get a broadcast license first. The relatively low frequencies (in the 900 MHz range in the US, and either 433 or 868 MHz elsewhere around the world) means that the radio signals have an easier time traveling long distances and passing through obstacles like walls or vegetation. LoRa signals can even get through substantial foliage like dense irrigated corn.

In contrast to other 900 MHz radios, LoRa radios use a clever (and patented) method of modulating the signal to allow the receivers to pick up even the faintest signal without getting confused by noise and interference. In exchange for far-reaching range, the relatively low frequencies that LoRa uses limit the speed at which large amounts of data can be sent. This means LoRa has a modest bandwidth of 27 Kbps. For applications where you don’t need constant data transfer, sending a few small data packets per hour is more than sufficient.

LoRaWAN, however, describes a standardized way of linking LoRa devices into a Wide Area Network. You can think of LoRa as the technology required to create a better envelope and letter, while LoRaWAN is the set of rules that your mail carrier follows to get your letters from one place to another in an organized and secure way. Just like you can use an envelope without using the Postal Service, you can use LoRa radios without organizing them according to LoRaWAN.

A LoRaWAN network consists of many end devices which use LoRa radio to communicate with a nearby gateway. Multiple gateways then communicate with a central server which is connected to whatever other parts of the internet are required. That means a LoRaWAN network requires cellular subscriptions only for the LoRa-to-cellular Data Gateways to get data to the cloud. By using cheaper LoRa connections where you can, instead of using cloud-connected technology for each device, you’ll save quite a bundle on monthly subscriptions. In addition to cost-effectiveness, LoRa devices have very small power requirements. Battery-powered devices can last months or years in the field with no battery replacements. 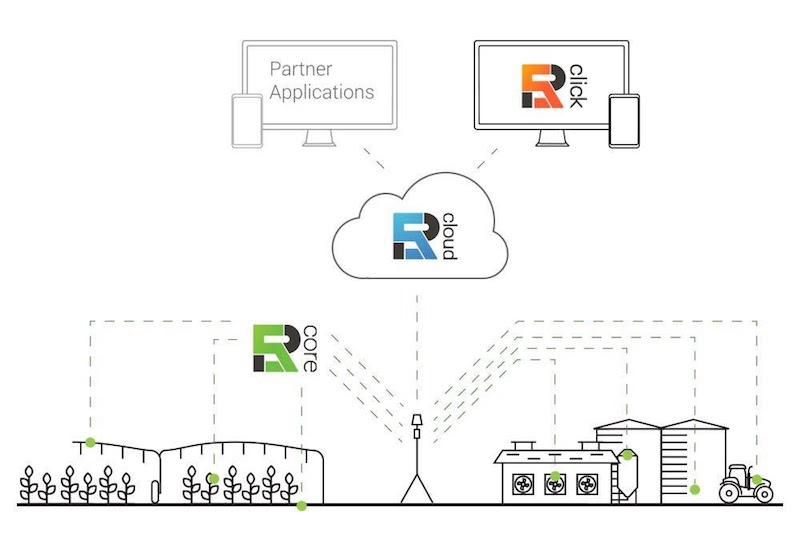 We believe in creating a Connectivity Platform that’s built for agriculture — which means optimizing products for remote applications. We’ve created a network to connect devices that couldn’t be connected before, because either there wasn’t a good signal, not enough power, or it was prohibitively expensive.

Here’s a table that summarizes all of the information from above. (CLICK TO ENLARGE) 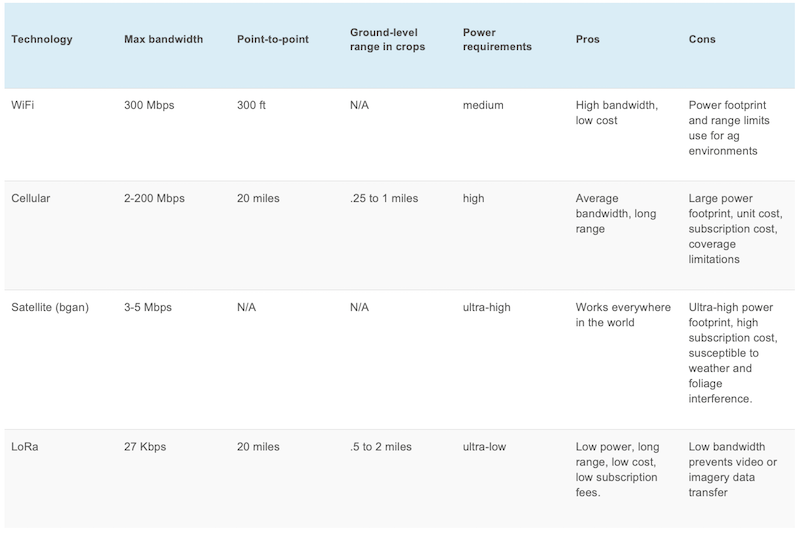 Contact RealmFive today to find out how our Connectivity Platform can give your operation simple, reliable, and scalable connectivity.