By Libby Wawzenek posted on January 29, 2021 | Posted in Dealer Development

Pictured Above: While Joel Kaczynski (r) and his precision farming team at RDO Equipment Co., had been accustomed to regular in-person meetings, 2020 forced them to adapt and adopt tools like Microsoft Teams to stay connected and efficient.

The success of a dealership’s precision farming business is a puzzle with many pieces — employee-customer relations, technological innovation, flexibility and the ability to adapt to unforeseen challenges all play a part. However, once a dealership achieves a high level of accomplishment, it takes more than maintaining the status quo to remain ahead of the curve.

Three highly successful dealerships — all previously recognized by Precision Farming Dealer’s Most Valuable Dealership program — have worked tirelessly to not only maintain the standards and innovation they were initially recognized for, but to improve on them.

What follows is an update from each dealership on the precision wins, challenges and evolution each has experienced since their recognition.

The 12 months that followed RDO Equipment Co.’s 2020 recognition as Most Valuable Dealership were anything but ordinary.

In late 2019, the dealership began rolling out Microsoft Teams — a switch that proved to be unexpectedly fortuitous.

“When COVID-19 hit we were able to transition quickly and smoothly to working virtually,” says Joel Kaczynski, product specialist manager at the Fargo, N.D.-based dealership. “By leveraging Microsoft Teams, we gave employees the ability to work remotely and still be productive.”

According to Kaczynski, that program has been an integral part of broadening internal communication options. “We were able to social distance and still connect with our teams,” he says. “One of our precision product specialists in the Northwest might have something he’s working on that he wants to bounce off others, and I can quickly put that idea on Microsoft Teams in a chat format. Each team built their own channels there, too, so each supervisor connects with their teams that way.”

Throughout 2020, Kaczynski utilized Microsoft Teams to transition training events from in-person to wholly virtual, and those sessions have been recorded and made available later.

“If any employees can’t make it, they’re able to gain access to it afterward,” he says.

The 35-ag location John Deere dealership has maintained a consistent commitment to utilizing technology to meet the needs of their customers. In fact, in the midst of the pandemic, that dedication may be stronger than ever.

“We had customers who were apprehensive to have support staff our there riding in the tractor,” Kaczynski says. “Our ability to connect with that equipment remotely was a huge advantage. It’s one of the positives that came out of this situation.”

According to Kaczynski, customers haven’t always been keen on using telematics. However, that’s changed in the past 10 months. “Customers see the benefits of remote support,” he says. “Somebody doesn’t have to come out to their tractor every time something goes wrong. I think that’ll be a lasting change.”

“Our ability to connect with that equipment remotely was a huge advantage. It’s one of the positives that came out of this last year…” – Joel Kaczynski

Relying so heavily on remote support has reinforced the importance of ensuring foundational strength in the network, Kaczynski says. It’s more important than ever that equipment is properly connected, and permissions are properly set up to facilitate remote support.

The company has also provided customers with remote support via its centralized support center. When customers call for assistance, Kaczynski says, a centralized team responds; that team is supported by additional employees throughout the company.

“We’ve tried to expand it even more by using our team for additional support during the day,” he says. Kaczynski’s team also assists with calls that come in after hours, especially as they relate to precision ag technology.

“We rotate 5 of our team members every week,” Kaczynski says. “When calls come in after hours, the phone will ring on 5 phones at the same time.”

According to Kaczynski, everyone who’s on call can see when the call is taken and who responded to it. That’s helped in a major way as the dealership has increased its levels of remote support.

“Everything’s got a ticket on it,” he says. “We can see who gets called back and messages that are taken.”

“It was a huge loss,” Kaczynski says. “We’re obviously still adapting to it. But I was impressed by how well everybody was able to pick each other up. We got through it together.”

Kaczynski credits Kreps and Connelly with much of the progress RDO has made, as well as steps the company will take in the future. “One of the things Mark said is to always be prepared,” Kaczynski says. “We continually do that within our organization. We try to stay ahead of everything we’re doing with technology. And Steve was such a proponent of training employees — that’s a big part of what I look at when we’re going into the future.”

“Technology changes faster than training modules are put out, so we’re developing a structure for that,” Kaczynski says. “Each of our stores has identified technicians that we’ll put on this course. We’ll continually monitor progress on it and watch as support and services are needed on any of the technology or with the equipment. The team will be ready for that opportunity.”

Despite the difficulties the past year has wrought, Kaczynski feels optimistic about where RDO is going. “Every major challenge you go through makes you better,” he says. “We’ll be able to better handle situations we run into, whether it’s weather or personnel changes. What we went through in 2020 makes us stronger as an organization.”

When Central Valley Ag (CVA) was recognized as the Most Valuable Dealership in 2018, the farm cooperative based in York, Neb., was intent on narrowing its focus and further specializing its business model. That perspective hasn’t changed.

“Since 2018 we’ve started focusing more on the grower of tomorrow,” says Glen Franzluebbers, director of professional ag services at CVA. “We know the industry is changing. Our growers are changing. Consumer demand is changing. We have to be able to evolve with that.”

A big part of that evolution has involved the creation of specialized positions as a way to meet the needs of the co-op’s diverse 11,500-farmer membership, Franzluebbers says. 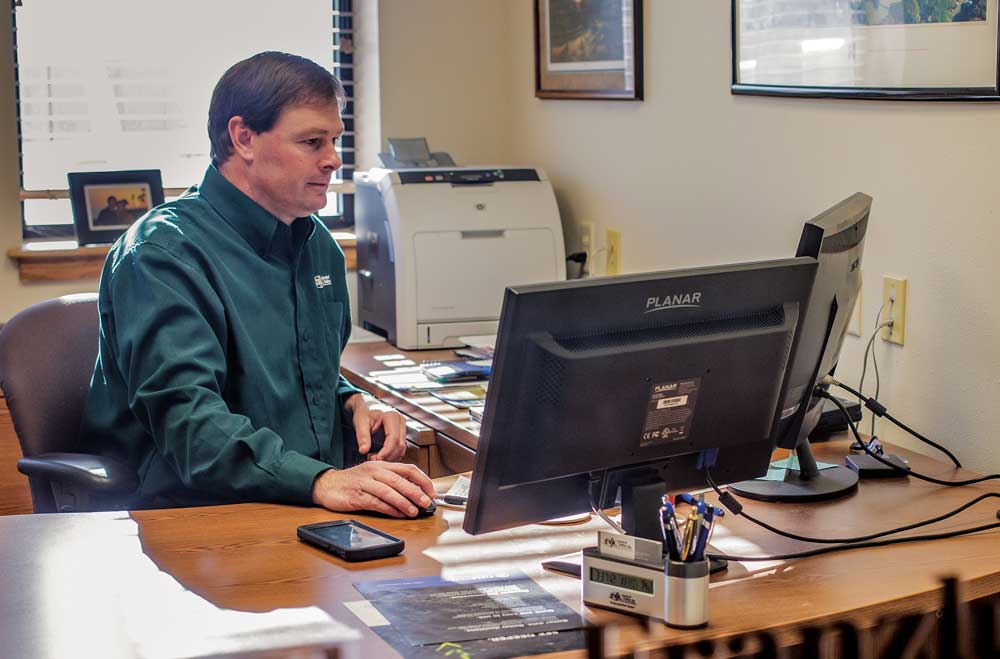 Specialization and capitalizing on emerging opportunities like organic farming and carbon credits has been a priority for Glen Franzluebbers and Central Valley Ag’s diverse precision farming business.

“We have to think outside the box and not just be the traditional ag retailer who sells fertilizer and chemicals,” he says. “A group of our members is focusing on organics to diversify their operations, so we’ve embraced that.”

The newly created role of Nutrient Management Lead supports CVA’s members who are delving into organic farming. The company has also added an Innovation Agronomist, whose role is to work with innovation plots and farm trials throughout the company.

“We used to try to be everything to everybody and we spread our team pretty thin doing that, and our service suffered…” – Glen Franzluebbers

“We have 5 innovation sites across Kansas, Nebraska and Iowa, and we do a lot of testing on new products, services and technology,” Franzluebbers says. “We’re figuring out ways we can add value to our growers’ operations. This way we have data from multiple years so we can confidently recommend these products and show the positive ROIs we’ve seen on our plots.”

Most recently, CVA has hired a Conservation Agronomist to focus on sustainability and carbon markets. Franzluebbers believes this role will be particularly critical in adjusting to the new presidential administration and corresponding changes.

“There’s a lot of opportunity for us to take advantage of climate initiatives and government regulations,” Franzluebbers says. “It depends on how you look at it. I think there are a lot of opportunities there for additional revenue.”

In addition to adding new positions, CVA has added the AgriSync remote support platform as a way to provide improved mobile support, and Franzluebbers says it’s played a big part in increasing the co-op’s efficiency.

“That’s one of the strongest things we’ve done in the last couple years,” he says. “We can do video calls, so we avoid a lot of drive time. That’s really helped us out.”

Another component of CVA’s increased productivity on the equipment side has been the utilization of Pipedrive as a customer relationship management (CRM) tool, according to Franzluebbers. He credits that program with the co-op’s ability to follow the entire sales process from start to finish while ensuring that no steps are missed.

“We have had some turnover in our precision equipment side, so these two tools have been extremely valuable to us,” Franzluebbers says. “When one person leaves, the next specialist comes in and can pick up right where the other one left off.”

The combination of those two software programs hasn’t just helped CVA increase its efficiency; they also work in tandem to prevent employee burnout.

“We used to try to be everything to everybody,” Franzluebbers says. “We spread our team pretty thin doing that, and our service suffered. We should have implemented mobile support and tracking tools earlier to make sure we could effectively service and support everything we had out there. We had too many irons in the fire. That’s something we’ve remedied and we continue to work on.”

It’s only been 5 years since Hoober Inc. was named Most Valuable Dealership in 2016, but as far as precision ag is concerned, that’s practically an eternity.

According to Scott Hoober, co-owner of the Intercourse, Pa.-based Case IH dealership, the company has maintained stability and success in that time thanks to their precision employees, many of whom have been with Hoober for a decade, which is a lifetime for precision specialists.

“Some people look at precision people as just an expense,” he says. “But at the end of the day, we find that they really drive business for the sales department and the service department. They tie everything together.” 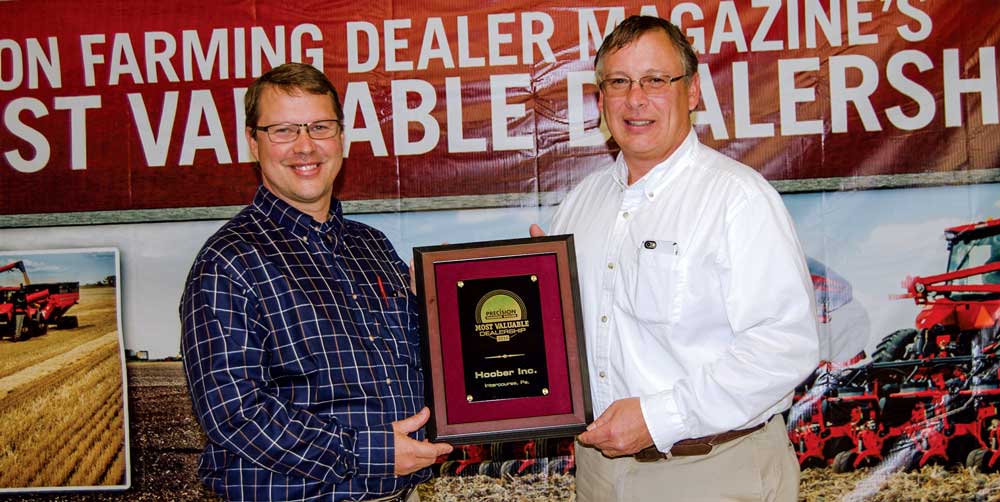 In 2016, co-owners Scott (l) and Chuck Hoober accepted the dealership’s Most Valuable Dealership at the Intercourse, Pa., store. In the 5 years since, Scott says a key to their success retaining precision employees is their view that they really drive business for the sales department and the service department.

Hoober says the 9-store dealership has continued to prioritize hiring a sufficient number of qualified workers — a goal that isn’t always easy to achieve. One strategy Hoober has employed to entice workers to stay longer is incentivized pay.

Consistency in staffing has been important as the company responds to bigger changes within the industry. One of those changes, according to Hoober, is the increased utilization of ISOBUS systems.

“Some people look at precision people as just an expense, but we find they really drive business for sales and service…” – Scott Hoober

“The ISOBUS phenomenon has become a big part of what we’re doing here,” Hoober says. “We’re doing a lot of testing, and we’ve found that a lot of ISOBUS equipment is not
created equally.”

Going forward, Hoober hopes to further expand on the precision teams’ role as true technology advisors to
the customer.

“As information becomes easier to visualize and transmit, we can become better advisors than we are currently,” he says. “Some of that information will come from places other than dealers, but we can help get that information to the customer faster and in a more usable form than today.”