The dealership has been very active this last year surveying a large number of local fields and is now ready to bring their solution to a wider market. Aerial surveying data, once collected, is submitted into the grower’s own farm management system. This additional data from the season can then be used to create management zones. 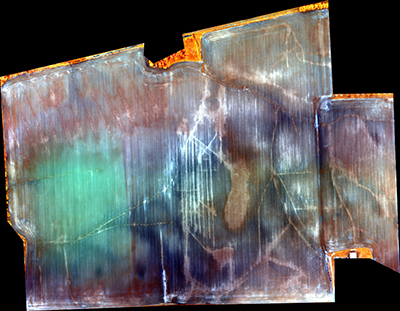 “The image resolution paired with a less than 48 hour turnaround time from flight completion, is allowing farmers to be able to capture imagery and use it before it’s too late,” said Sam Romain, the lead coordinator for Haug’s Aerial Program. “We can use this imagery to look for a large variety of conditions happening in field including insect detection, weed pressure, as well as possible nutrient deficiency, allowing us to fix the problem before it is even seen by the naked eye.”

Through the use of manned aircraft, Haug Implement Co. has the ability to survey sections of land for any size farmer looking to utilize NDVI imagery on their operation. Whether it’s just to gain more knowledge of their fields during the growing season, or a need to make an immediate fix to a problem, high quality aerial imagery is just the tool required. The decision to use a manned aircraft allows the ability to provide quick turnaround statewide while maintaining a final resolution of ten inch or better.

Aerial Imagery has recently seen a steep increase in popularity, particularly in the drone marketplace. In 2014, Haug Implement Co. was on the forefront of drone technology and had concluded that it wasn’t efficient enough for the kind of operational speed they wished to achieve and have since switched to 100% manned systems.