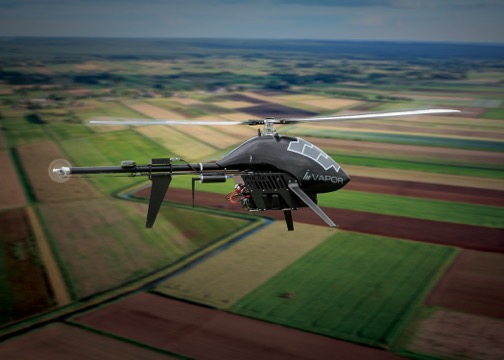 LAWRENCE, Kan. — With more than a decade of research and development behind the company and its products, Pulse Aerospace recently introduced its UAS (unmanned aircraft system) technology to the agricultural industry.

The Pulse system is based on the company’s Vapor unmanned air vehicle, which combines advanced autopilot with an FAA-compliant, military grade, all-electric, unmanned helicopter for commercial, research, security … and, now, agricultural applications.

Available in two models, the Vapor 35 has a main rotor diameter of 65 inches and an allowable payload of 5 pounds, while the Vapor 55 has a rotor diameter of 90 inches and a 10-pound payload. Both machines deliver up to 1 hour of flight time on a single battery charge, while offering a flight ceiling of 12,000 feet and a datalink range of up to 5 miles.

“One of the things that sets the Vapor apart from other UAS systems is it can be programmed to take off and go to a hover position with a single command,” explains Aaron Lessig, founder of Pulse Aerospace. “Once it has launched, it can also execute a complete preprogrammed mission without any user interface.”

In other words, the Vapor can be programmed to fly a back-and-forth pattern across an entire field — mapping the area, scouting for problems or monitoring security — and return to the base without any additional operator input. Similarly, it could be programmed to fly over a pasture, checking cattle with an infrared thermometer, to identify sick animals before they develop additional symptoms. Of course, the operator can interrupt the program at any time and/or operate the Vapor manually with the ground control station.

Pulse Aerospace has partnered with Juniper Unmanned, a private technology company that helps simplify UAS operations for both the system manufacturer and the operator. Pulse has also partnered with YellowScan, a company that designs, develops and produces UAV mapping solutions for professional applications in such fields as forestry, mining and agriculture. One of YellowScan’s latest developments is the use of LiDAR — a technology to make high-resolution maps using light and radar — for data acquisition from an unmanned aircraft system like the Vapor.